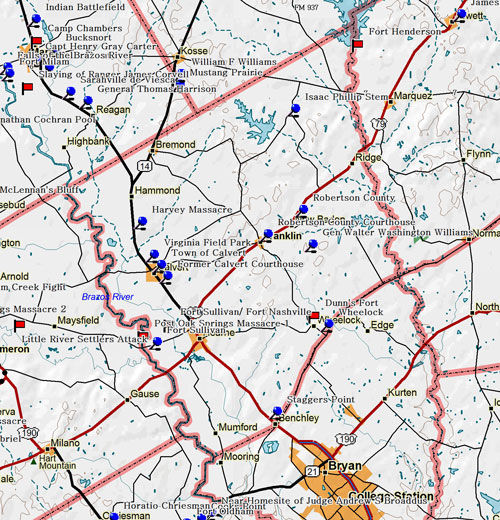 Marker Title: Former Calvert Courthouse
Address: Elm St.
City: Calvert
County: Robertson
Year Marker Erected: 1968
Marker Location: Between Burnett and Hanna.
Marker Text: Most imposing public building in early Robertson County. After becoming county seat in 1870, Calvert lost many leaders in 1873 yellow fever epidemic. As planned, this Courthouse was begun in 1875; but before its completion, Franklin was named county seat, in 1879. Robert A. Brown, a merchant, investor and planter, purchased this building in 1885. With help of his wife, Lucy Herndon Brown, he made it into a residence. In 1909 his heirs sold it to Mrs. Fannie L. Hammond, in whose family it remained until 1966, when it became a museum. Recorded Texas Historic Landmark - 1968

Marker Title: Robertson County Courthouse
Address: Courthouse Grounds, Center St.
City: Franklin
County: Robertson
Year Marker Erected: 1968
Marker Text: Erected in 1882 at a cost of $30,000, this white limestone building is the fourth to serve as Robertson County Courthouse. In 1879 the county seat had been moved for the fifth time, to Morgan, on the International & Great Northern Railroad. But because Texas already had a post office named Morgan, the town was renamed Franklin for the first county seat, which was named for pioneer Will Franklin. Plans for a courthouse were begun that year; and in 1881 the construction was started, under F. E. Ruffini, architect. Since then the building has been remodeled.

Marker Title: Staggers Point
City: Benchley
County: Robertson
Year Marker Erected: 1973
Marker Location: 1 mi. east from Benchley on the OSR Hwy. (SH 6)
Marker Text: Earliest large community in Robertson's colony. Settled by Irishmen who came to America in 1821; lived in South Carolina and then in Alabama; and in 1829 sent west an emissary, Robert Henry, to find a permanent location. In 1833, their ox-wagon train arrived, and log cabins were built. By 1836, kinsmen had joined early arrivals to strengthen settlement. Community name, meaning "Strivers' Point" in dialect, was probably given for rugged zeal of settlers in face of hardships. James Dunn built a fort, to give neighborhood a refuge during Indian raids. In War for Independence, 1835-36, Staggers Point men fought in major actions, including the April 21, 1836, Battle of San Jacinto, which freed Texas from Mexico. In 1830s and 40s, the Irish were compelled to keep up their defenses against the Indians. Women as well as men earned respect for skill with "long guns." In time their village had a church, stores, cotton gin, race track, and taverns, and was invaded by gamblers and ruffians drawn to the races. Until the settlers subdued the lawless, duels and gunplay were common. This remained a progressive community until 1868, when Houston & Texas Central Railway bypassed it, and business waned. Descendants still honor the settlers.

Marker Title: Isaac Phillip Stem
City: Bald Prairie
County: Robertson
Year Marker Erected: 1988
Marker Location: Wesley Chapel Cemetery, 16 mi. north of Franklin on FM 979 north of Bald Prairie community.
Marker Text: (1819-1893) Tennessee native Isaac Phillip Stem enlisted in the Western Frontier Service in that state in 1836. In October 1836 he moved to Texas and joined the Republic of Texas army at Houston. Continuing to serve in the military, Stem was a participant in the Battle of Plum Creek on August 1, 1840, in present Caldwell County. The battle was fought between Texas soldiers and Comanche Indians, who had raided the coastal towns of Linnville and Victoria. Stem served in the Somervell Campaign of 1841 and was a member of a company of mounted volunteers during the Mexican War. After his discharge from the Texas troops in 1846, Stem joined the United States Infantry at Corpus Christi and continued in the war with Mexico. Discharged at Monterrey due to illness, he later returned to Tennessee and joined the Tennessee Volunteers at Memphis. He later transferred into the U. S. Infantry once again. Isaac P. Stem and his wife, Lucy Ann Weaks, were the parents of eight children. The family moved to Robertson County in 1869 and Stem became a farmer and rancher. He died in 1893 and was buried here beside his wife.

Marker Title: Virginia Field Park
City: Calvert
County: Robertson
Year Marker Erected: 1968
Marker Location: Burnett St. between Pin Oak and Maple in park
Marker Text: Land given to Calvert 1868 for use as a park by the Houston & Texas Central Railroad. Co. C, 4th Texas Inf. Regt., Hood's Texas Brigade, under Major Wm. Townsend, mustered nearby, 1865. Was site during Reconstruction, 1868-1873, of "Sky Parlor" (room built on pole, as a tree house) to serve as prison for Southern sympathizers. In 1895 and 1912, Hood's Texas Brigade Association entertained here. The Victorian pavilion and two gazebos were built 1895 for concerts, gatherings, and dancing. The park was named in 1937 for landscaper, Mrs. Virginia Field.

Marker Title: Wheelock
Address: FM 391 & FM 46
City: Wheelock
County: Robertson
Year Marker Erected: 1997
Marker Location: Corner of State & High.
Marker Text: Eleazar Louis Ripley Wheelock (1793-1847) came to Texas from Illinois in 1830. A surveyor for Robertson's colony, he established a town on his land along the Old San Antonio Road. Named Wheelock in 1837, the town boasted twenty businesses by the 1840s, including general stores, land and freight offices, and a cotton gin. By 1845 Wheelock was a transportation hub in Central Texas. A post office was established in 1846, and the town was Robertson County Seat from 1850 to 1856. Bypassed by the railroad in the 1860s, Wheelock declined; many of its citizens moved to Hearne. (1997)

Marker Title: General Walter Washington Williams
City: Franklin
County: Robertson
Year Marker Erected: 1970
Marker Location: 4 mi. east of Franklin via FM 2446
Marker Text: Reputed to have been last surviving soldier of the Civil War (1861-1865). Born in Ittawamba County, Miss., Williams (Nov. 14, 1842 - Dec. 19, 1959) during the war was a forage master for the celebrated Hood's Texas Brigade. Soon after the war he moved to Texas and farmed near here. He was twice married and had a large family, with the descendants numbering over 200 when he died. He had lived very quietly until in extreme old age he gained fame as one of a very few remaining veterans. After the nation lost all other men who had fought in the Civil War, he was given honorary rank of General by President Dwight D. Eisenhower. When Gen. Williams died in Houston at home of a daughter, President Eisenhower proclaimed a period of national mourning. Williams rests here in Mount Pleasant Cemetery among families who migrated to Texas and braved the dangers of the frontier for years before he came. This is one of the oldest public burial grounds in Robertson County, situated within boundaries of colony planted north of El Camo Real by the pioneer Sterling C. Robertson, from Tennessee. The Robertson colony was founded in the 1820s and was a major civilizing influence in East Texas.

In the vicinity of where Highways 79 and 190 and FM 485 cross the Brazos were the now ghost towns Nashville (it had a fort) and Fort (Port) Sullivan. Both have disappeared, leaving an interesting history. As early as 1843, the settlements' developers dreamed of establishing Fort Sullivan as a part for steamboats moving up the Brazos River, and by 1845, a steamboat was driven up to the mouth of nearby Little River. In nearby Nashville, there were more than 20 stores and a population of 1,000. Then both of the communities vanished without a trace.