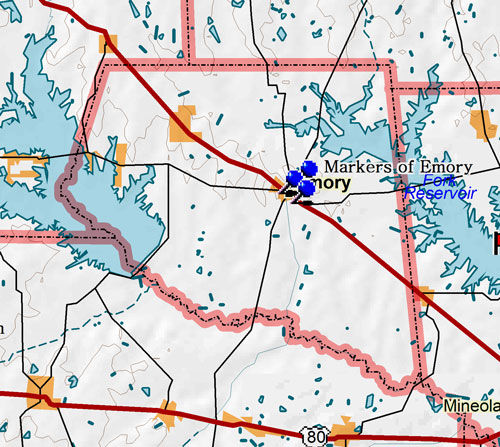 Marker Title: Ambrose Fitzgerald
City: Emory
County: Rains
Year Marker Erected: 1983
Marker Location: private cemetery near the Emory City Cemetery on N. Alexander St.
Marker Text: (March 12, 1827 - June 15, 1893) A native of Missouri, Ambrose Fitzgerald settled near here in 1846 on land that was then part of Nacogdoches County. Since this area was included in the creation of later counties, he was able to serve as the first clerk for Van Zandt and Wood counties. After participating in the Civil War, he returned here and became the tax assessor, district clerk, and county clerk for Rains County. A Baptist preacher, he baptized James S. Hogg, later the Governor of Texas.

Marker Title: Rains County
Address: Courthouse lawn
City: Emory
County: Rains
Year Marker Erected: 1970
Marker Location: Quitman at Texas
Marker Text: One of the earlier areas of Texas to be settled. J. H. Hooker, first known settler, built a grist mill on the Sabine River here in the 1840s. Emigrants from the Old South came in after 1840, although the county was not created until 1870. The name honors pioneer Emory Rains (1800-1878). He served as Senator in 8th Legislature from district out of which this county was later carved and had a long public service career. Rains County is known as the birthplace of the Farmers Cooperative and Educational Union of America, founded in 1904.

Marker Title: Emory Rains
City: Emory
County: Rains
Year Marker Erected: 1983
Marker Location: Emory City Cemetery, N. Alexander St.
Marker Text: (May 2, 1800 - Aug. 11, 1878) Texas pioneer Emory Rains served as an alcalde under Mexican rule and as a counselor in the East Texas Regulator-Moderator War of the 1840s. As a senator in the Republic of Texas Congress, he helped pass the Homestead Act. Rains also served in the 1845 Constitutional Convention and in the State Legislature, where he worked for the formation of this county, which was named in his honor. The Rains County Seat, Emory, was also named for him.