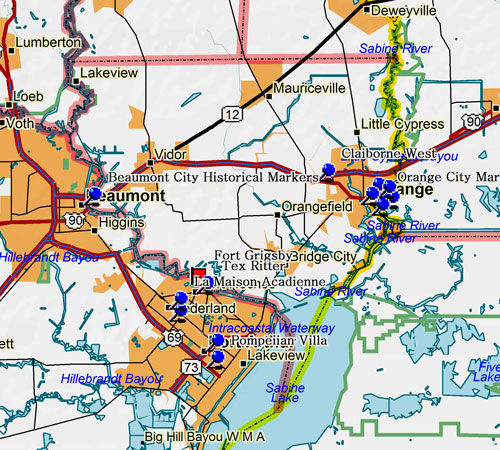 Marker Title: Atakapan Indians of Orange County
City: Riverwalk Park
County: Orange
Year Marker Erected: 1986
Marker Location: Front Ave. & the end of 4th St., Ochiltree, Riverwalk Park, Orange.
Marker Text: The Atakapan Indians, a tribe associated with southeastern U. S. bands, lived in this area for centuries. Studies have suggested their presence covered a large region of southeast Texas. Their name comes from the Choctaw Indians, and means "Man-Eaters". It is believed that Indians encountered by Spanish explorer Cabeza de Vaca in 1528 along the Gulf Coast may have been Atakapans. The first documented contact with the tribe was by French sailor Simars de Bellisle in 1719. Put ashore with four others to collect fresh water, the men were abandoned and de Bellisle, after the deaths of his companions, was made a captive of the Indian tribe for a time. Later contact with the Atakapans included trade with French and Spanish explorers. The tribe was evidently a fairly loose confederacy of small, scattered bands. Archeological evidence suggests they subsisted mainly on small game, fish, and wild plants, and evidently were not farmers. Shell middens found indicated the existence of Atakapan campsites in this vicinity. The tribe disappeared from Texas in the early 19th century, either becoming extinct or integrating into other tribes. Texas Sesquicentennial 1836-1986

Site of End of the Line Station

Marker Title: Site of End of the Line Station
Address: Front Ave. at 23rdSt.
City: Orange
County: Orange
Year Marker Erected: 1981
Marker Text: The original charter for a rail line through the Orange area was granted to the Sabine and Galveston Railroad and Lumber Company in 1856. About the same time the New Orleans, Opelousas and Great Western Railroad Company was building a line west from the Mississippi River. The Louisiana Legislature later endorsed a plan to join Texas in the completion of the trade route between the states. The two companies were reorganized as separate divisions of the Texas and New Orleans Railroad. The Texas division completed construction to this site before the Civil War. Since the rail line stopped at the Sabine River, the first depot in Orange was known as the End of the Line Station. Trains unloaded cargo here for transfer to riverboats and ocean freighters. Sections of the line remained in operation during the Civil War, but nearby rails were used to build Confederate fortifications at Sabine Pass (34 mi. SW). The interstate route was completed in 1881 under the direction of Charles Morgan, a steamship line owner. The first station, damaged by an 1885 storm, was replaced by a larger facility with river loading docks. The Southern Pacific Railroad later took over the T. & N. O. Line.

Marker Title: Alexander Gilmer
City: Orange
County: Orange
Year Marker Erected: 1981
Marker Location: Evergreen Cemetery, Border and Jackson St.
Marker Text: A native of Ireland, Alexander "Sandy" Gilmer (Sept. 7, 1829 - July 30, 1906) came to the United States in 1846 at the age of seventeen. Settling first in Georgia, he worked for his brother John, who had a contract to supply ship masts to the French government. Later the brothers constructed a steamboat for use on the Chattahoochee River. In the late 1840s Gilmer came to Texas and entered the shipbuilding business in Orange in association with his cousin George C. Gilmer. Together they later opened a local mercantile. During the Civil War, Gilmer served as a Confederate blockade runner. Through his efforts, local cotton and lumber were exchanged for much needed supplies. In 1863 he participated in the Battle of Sabine Pass. After the war, Gilmer started a sawmill in Orange. Despite a series of fires which destroyed four of his mills by 1899, Gilmer became a leading lumberman of the area. His later holdings included mills at Lemonville and the Jasper County town of Remlig (Gilmer spelled backwards) and timberland throughout the coastal prairie of Texas. Gilmer died in 1906 while on a business trip to New York City. Twice married, he was the father of nine children by his second wife Cleora C. Thomas of Orange.

Patrolled on both sides of the Sabine by Texans to protect troop movements. Commercial shipping, stagecoach travel routes, freighters' trains and herds of cattle and hogs going east on the hoof.

Passed Texas troops through by thousands to go eastward through marshlands and sloughs toward Brashear City and New Orleans or upper Mississippi River crossings to eastern battlefields. Many units went by rail from Houston to Beaumont, then to Sabine Pass and up the river by steamer.

Niblett's bluff welcomed steamers unloading guns, ammunition, clothing, medicines and other goods vital to the confederacy -- swapping these for Texas and Louisiana cotton, called "money of the confederacy" because of its purchasing value in world trade.

Marker Title: B.H. Norsworthy
City: Orange
County: Orange
bMarker Erected: 1980
Marker Location: Evergreen Cemetery, Jackson & Border St., Orange
Marker Text: (Nov. 26, 1838-Feb. 21, 1901) Alabama native B. H. Norsworthy migrated to Texas in 1860. During the Civil War he organized a Confederate unit known as the Lone Star Rifles. Wounded at the Battle of Thompson's Station in Tennessee (1863) and the Battle of Jonesboro, Georgia (1864), he attained the rank of lieutenant colonel. In the 1870s Norsworthy moved to Orange, where he worked as a merchant and a rice farmer. He was later elected to three terms as mayor of the city. Recorded - 1980

Marker Title: George Alexander Pattillo
City: Orange
County: Orange
Year Marker Erected: 1987
Marker Location: Ochiltree Inman Park, Front & Third Streets
Marker Text: A veteran of the War of 1812, Georgia native George Alexander Pattillo (1796-1871) migrated to this area in the early 1830s. He served on the local Committee of Correspondence created by the Convention of 1832 and on the General Council of the provisional government established by the Consultation of 1835. During the Texas Revolution of 1836, Pattillo, who had earlier received a Mexican land grant, joined with other area settlers to aid the Texas Army. Arriving at San Jacinto the day after the decisive battle, he was commissioned by Texas President David G. Burnet to direct the formation of Jefferson County, which included this area. He also became an associate justice for the new county and was a postmaster for the settlement of Pattillo's station, later the Terry community of central Orange County. In the early 1840s Pattillo served this area as a Representative and a Senator in the Republic of Texas Congress, where he actively supported annexation to the United States. In 1852 he was elected the first judge of the newly-formed Orange County. An active Masonic leader in southeast Texas, Pattillo died in 1871 and was buried in a family plot at Bunn's Bluff on the Neches River, where he had lived since 1844.

Marker Title: John Thomas Stark
City: Orange
County: Orange
Year Marker Erected: 1981
Marker Location: Evergreen Cemetery, Border & Jackson St.
Marker Text: Patriarch of the Orange County Stark family, John T. Stark was born in Pebble County, Ohio, in 1821 and moved to East Texas in 1840. He settled in Newton County in the 1850s where he read law and ran a mercantile store. In 1861 Stark joined the Confederate forces as a private in the Texas infantry and was later elected captain. In 1874 he moved to Orange where he practiced law, served one year as Orange County judge, and was active in the old Orange First Baptist Church. Stark's three marriages produced eighteen children. He died in 1893 and is buried in this cemetery.

Marker Title: Claiborne West
City: Orange
County: Orange
Year Marker Erected: 1979
Marker Location: US 10/90, 10 mi. west of Orange at entrance to Claiborne West Park.
Marker Text: (1800-1866) Born in Franklin County, Tennessee, Claiborne West moved as a young man to Louisiana. He married Anna Garner in 1824 and they had nine children. His family immigrated to this area in 1825 and received a land grant in the Cow Bayou settlement. Soon West joined in the struggle for independence from Mexico. As one of the representatives from Liberty municipality, he attended the 1832 Convention and the 1835 Consultation at San Felipe de Austin. West was responsible for the designation of Cow Bayou as Jefferson municipality, the forerunner of Jefferson and later Orange County. He served as a representative from the municipality to the general council and acted as local postmaster. At the general convention at Washington-on-the-Brazos on March 2, 1836, West was one of 58 signers of the Texas Declaration of Independence. He helped draft the Republic of Texas Constitution. From July to October, 1836, West served in Franklin Hardin's Company of volunteers. He then served in the first Congress of the Republic of Texas. West moved from here to Montgomery County and later settled in Seguin. He was buried in the Riverside Cemetery at Seguin.