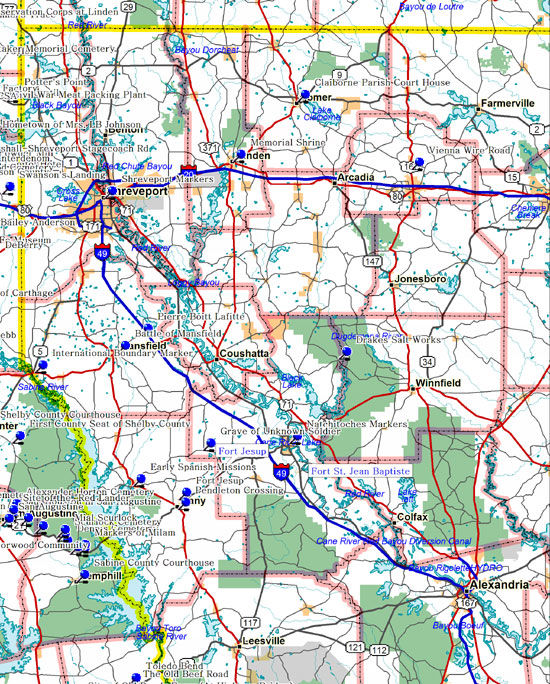 On bluff, south of this road, is the site of Caddo Agency House where Caddo Indians ceded about 1,000,000 acres to the U.S. for $80,000 on July 1, 1835. by this treaty, Indians also gave to Larkin Edwards, interpreter and friend, a tract of land that later became the site of Shreveport.

Formerly Fort Turnbull, built by the Confederates to defend Shreveport, then Capital of Louisiana. In 1864, charred logs simulating cannon were used to deter Union forces from attacking.

Captain Henry Miller Shreve came to the Red River in 1833 to remove the log jam 165 miles long, extending from Loggy Bayou to Hurricane Bluffs; the removal of the raft by 1837 opened the Red River to navigation and made Shreveport an important center of trade and gateway to the West.

Built in 1860, this antebellum building was point of departure for Confederate troops during the War Between the States. It is one of the finest examples of Southern expression of Greek architectural style.

Three miles east is site of the Battle of Mansfield, April 8, 1864, a decisive Confederate victory which led to the defeat of General Banks’ Red River campaign and Federal evacuation at Grand Encore.

Grave of Pierre Boitt Lafitte, son of pirate Pierre Lafitte, hero in defense of New Orleans against British in 1815. He owned an 11, acre grant. A community, lake and river were named for him.

First called Colvin’s Post Office in 1838, Vienna was incorporated in 1848. It was an overnight stop on the Trenton-Shreveport Stage Road, later called the Wire Road when the telegraph line was strung along it.

Founded by St. Denis, 1714; the oldest permanent settlement in Louisiana and the entire Louisiana Purchase territory west of the Mississippi. On this site, Fort St. Jean Baptiste was built about 1715.

First sighted by St. Denis and Bienville in 1700, this hill was later St. Denis’ vacherie. Here three paths met. From the Spanish west came cattle and horses; eastward were his home and the route of flatboats to New Orleans. A road wound north to the Fort.

First noted by Bienville in 1700, this site is one of the oldest wells in Louisiana. First used by the Indians, it provided a major supply of salt for Confederate forces during the War Between the States.

About 2 miles Northwest. Occupied 1816-17 and 1819-22. Purpose was to police southwestern frontier and guard Red River and Bayou Pierre. General Edmund P. Gaines, commander of the Western Department, had his headquarters here for a time.

Built about 1715 by request of Saint Denis to halt the Spanish expansion eastward. Natchitoches Indians, allies of the French, gave their name to the city.

At this location stood the home of Francois Rouquier, early Natchitoches Indian trader and farmer. The house foundations, dating circa 1780 were uncovered during archaeological excavations undertaken in 1975.

Here lies an unknown Confederate, killed by Union troops, April 2, 1864, during the Red River Campaign. This soldier had been cut off from his unit following a skirmish at nearby Crump’s Hill. He was shot at this site while attempting to rejoin other Confederate troops.

On February 17, 1690, Henri de Tonti, a trader and French army officer known as the Iron Hand, arrived in this area to search for LaSalle’s lost colony. While here, he helped arrange a treaty between the Taensa and Natchitoches Indians.

On this hill Spain erected a fort that served as Capital of the Province of Texas from 1721 to 1773. The only Spanish Mission in this area was erected on the opposite hill in 1717, soon after the French founded Natchitoches.

Harrisonburgh Road - This historic road was a vital link between the Natchez Trace and the old Spanish Camino Real. Over it passed the founding and colonizing pioneers who paved the way for the settlement and development of Western Louisiana and Eastern Texas.

Oldest settlement in the Louisiana Purchase, 7 miles west. Steeped in romance and tradition, here you will find the true flavor of the Old South amid scenes of great beauty of Cane River.

Site of the defeat of the Natchez Indians in 1732 by French troops and their Indian allies, after the Natchez had attacked Fort St. Jean Baptiste de Natchitoches. Two and one-half miles south.

Established in 1822 by General Zachary Taylor as the major American Fortification on the Southwestern frontier, and later became known as the Cradle of the Mexican War.

Entrance to controversial Neutral Strip bounded by Sabine River West and Arroyo Hondo East. It was claimed by the United States after the Louisiana Purchase, 1803, and by Spain as the ancient boundary of Mexico.

In memory of our pioneer settlers who built near here the first church, schoolhouse, seat of government, post office, and cemetery. Here the first white child born in this Minden area is buried.