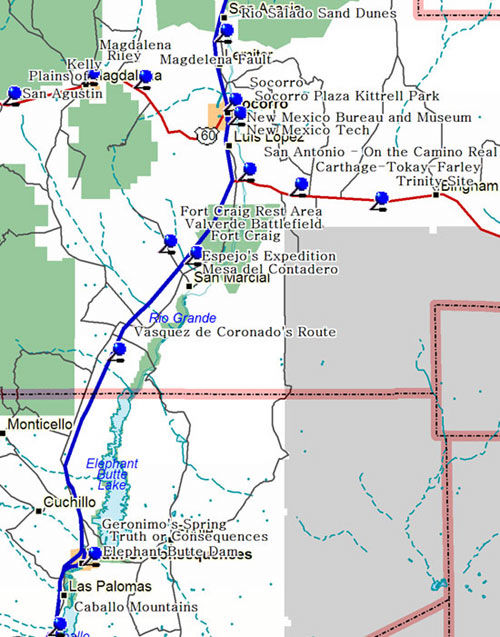 To east beyond Caballo Resevoir are rugged Caballo Mountains, uplifted about 3 miles above downdropped Rio Grande trough, along fault scarp at edge of mountains. Lowest slopes are ancient granites. Black ironstone beds are at base of high cliffs which are formed by Paleozoic dolomites and limestones.

Important coal-mining towns from the 1880s to 1925 when the mines closed. Originally developed by the Santa Fe Railroad and later operated by the Carthage Fuel Company mainly to fire the Kinney brick kilns in Albuquerque. Farley was a limestone quarry. The Hilton Mine belonged to the father of Conrad Hilton.

Pueblo Indians had been irrigating and farming in the Rio Grande Valley for several hundred years before the Spaniards arrived to continue the tradition. The construction of Elephant Butte Dam, 1912-1916, represented the first large scale attempt to harness and control the river, and assured irrigation downstream.

Espejo's Expedition on the Camino Real

In 1582 and 1583, Antonio de Espejo and his party paralleled the Rio Grande north to the Bernalillo area. He was trying to learn the fate of two Franciscan friars who had stayed with the Pueblo Indians after the Rodriguez-Sanchez Chamuscado expedition returned to Mexico in 1581.

Fort Craig, which replaced Fort Conrad located about nine miles north, was established to control Indian raids along the Jornada del Muerto. Troops from Fort Craig were defeated by Confederate forces at the Battle of Valverde, 7 miles distant, in 1862. Capt. Jack Crawford, the "Poet Scout," was stationed here.

Fort Craig is on alluvial gravelly sands, derived from mountains to west, sloping toward Rio Grande to east. Magdalena Mountains to northwest and San Mateo Mountains to west are mainly thick piles of volcanic rocks. San Andres Mountains on southeast horizon are of older limestones and shales.

The Indians knew of the great curative powers of the mineral waters of this spring long before the white man came. According to legend, Geronimo, famous Apache war chief, often stopped here to bathe and relax.

Kelly was central New Mexico's most prosperous mining town from the 1880's until the early 20th century. Silver had been mined at Kelly since the 1860's but in 1903, it became a major source of zinc, carbonate, a vital ingredient in the manufacture of paint. Located 3.5 miles south of Magdalena on NM114, Kelly is now a ghost town, but former residents still host a festival every October.

Magdalena is located in a mineral-rich area which became a center of silver mining in the 1860s. In 1885, a railroad was built to the smelter in Socorro, and Magdalena became an important railhead for cattle, sheep and ore.

Magdalena Mountains to west are topped by South Baldy at 10,783 feet; La Jencia plain to east is down dropped with rocks in Water Canyon 3 miles below this sign. Bench along edge of mountains is Magdalena fault dividing uplifted mountains from downdropped plains

The Chihuahua Trail passed by the large volcanic mesa on the east bank of the Rio Grande, marking the northern end of the Jornada del Muerto (Journey of the Dead Man). "Contadero" means "the counting place," or narrow place where people and animals must pass through one-by-one.

Based on the personal collection willed to the New Mexico School of Mines by C.T. Brown in 1928, this museum displays thousands of mineral specimens from around the world with special emphasis on minerals found in New Mexico. Highlights include smithsonite from Kelly (Magdalena District), linarite from Bingham, Grants District uranium, Carlsbad potash, Silver City copper, Harding pegmatite minerals, and numerous fossils.

The New Mexico School of Mines was established in 1889 to train engineers and technicians for the Territory's developing mining industry. The school opened its doors in September 1893 with 7 students. Now known as the New Mexico Institute of Mining and Technology, Tech offers degrees including the doctorate in a number of science and engineering disciplines.

Northeast part of Plains of San Agustin, occupied some thousands of years ago by large intermountane lake, is downdropped graben bordered by uplifted volcanic masses. San Mateo and Luera Mountains and Pelona Mountain are southeast and Horse Mountain and Datil Mountains are northwest.

Located twenty minutes north of Magdalena, Riley was a small agricultural village originally named Santa Rita by its Hispanic founders in the mid nineteenth century. During the late 1880's mining became an important part of the town's economy, but when the mines gave out, the town was slowly abandoned. Former residents still gather every May to observe Santa Rita days.

Sand blown northeastward from normally dry bed of Rio Salado forms dunes along this part of Rio Grande Valley. Rio Grande is in deep down-dropped trench with uplifted Los Pinos Mountains to east and Ladron Mountains to northwest. Rocks on crest of Ladrons are 4 miles deep below sand dunes.

In the mid-19 th century, San Antonio was the last outpost on the Camino Real before the Mesilla Valley to the south. Today it is knows as the birthplace of Conrad Hilton and the site of the first Hilton Hotel, located in his family's adobe house near the train station.

First seen by the Spanish in 1581 and visited by Juan de Onate in 1598. Piro-speaking Pueblo Indians reportedly supplied much-needed corn, hence the name Socorro (help in Spanish). The Church of Nuestra Senora de Pilabo del Socorro was built about 1629. Abandoned in the Pueblo Revolt of 1680, the present town was founded in 1816.

Established in 1816 at the time of the original Spanish land grant, this plaza developed into the traditional social, political and economic hub of the community. Excellent example of Mexican and Territorial period architecture surround the plaza, which is named after Dr. L.E. Kittrell, a local dentist who landscaped the plaza in the 1880's.

The world's first atomic explosion occurred on July 16, 1945, at the Trinity Site near the north end of the historic Jornada del Muerto. It marked the beginning of the nuclear age, and the culmination of the Manhattan Project. The site, now part of the White Sands Missile Range, is closed to the public.

In 1581, Capitan Francisco Sanchez Chamuscado took possession of this region for the King of Spain, naming it the Province of San Felipe. Significant European settlement of the area, however, did not occur until the mid-1800s. Once called Hot Springs because of it curative natural hot springs, "T or C" in 1950 took its present name from Ralph Edwards' radio program. 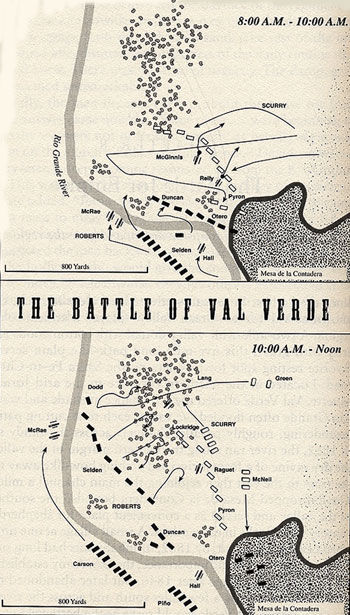 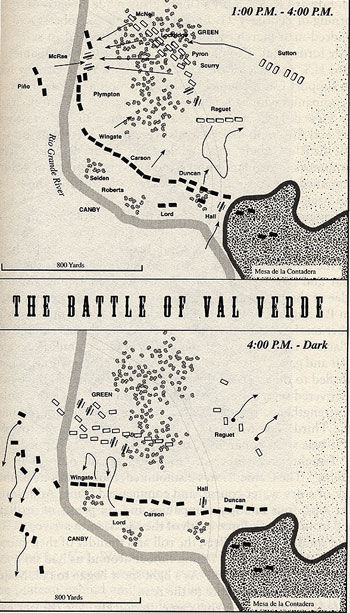 Maps from the book, Blood & Treasure, by Donald S. Frazier 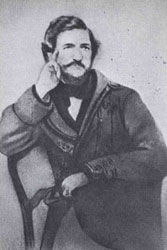 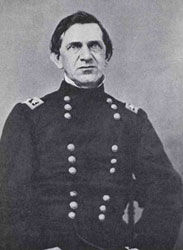 Photos from the book, Confederate General of the West,
by Jerry Thompson

The first major battle of the Civil War on New Mexico soil occurred at Valverde on February 21, 1862. when a Confederate force of Texas Volunteers under General H.H. Sibley defeated Union forces commanded by Col. E.R.S. Canby stationed at Fort Craig. From here, Sibley marched north and was defeated in Glorieta Pass near Santa Fe. More

In 1541 an expedition from the army of Francisco Vasquez de Coronado, New Mexico's first explorer, marched south 80 leagues to investigate the pueblos along the lower Rio Grande. The group reached that part of the infamous Jornada del Muerto, now covered by Elephant Butte Lake, where the river disappeared underground.