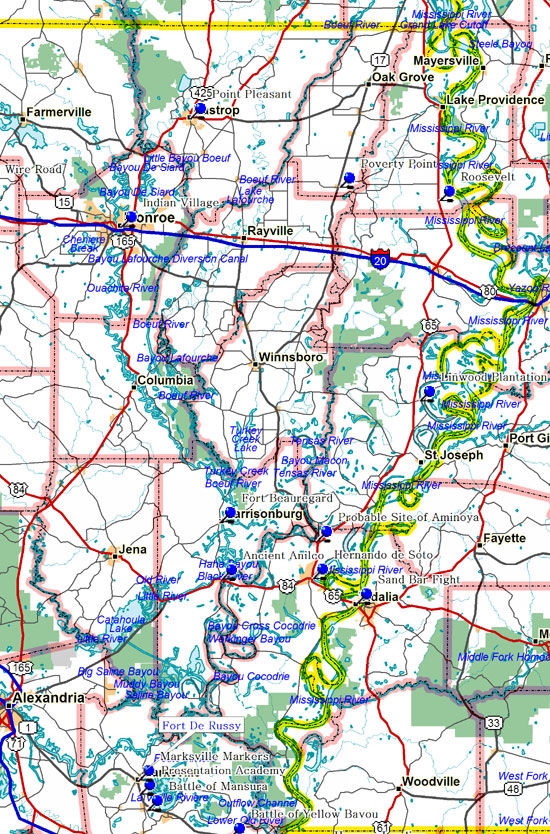 Rezin P. Bowie, brother of Alamo hero James Bowie wrote, The first Bowie knife was made by myself in the Parish of Avoyelles. With this knife James killed Norris Wright in the famous Sandbar Fight near Natchez, Mississippi, September 19, 1827.

This c. 1820 Creole house is typical of the dwellings of early Avoyelles Parish families. The Bordelon family, who built the house, was one of the parish’s pioneer families. Listed on the National Register of Historic Places in 1980.

One mile east on Old River is the restored Marksville Indian ceremonial center used about 500 A.D. Ancestors of Avoyle and Natchez Tribes lived there until 1700 A.D.

Site of first Catholic School in Avoyelles Parish-1855. Founded by Daughters of the Cross of Treguier, France, under Mother Mary Hyacinth Le Conniat on request of Bishop Martin. Battle of Mansura, May 16, 1864, began on Convent Grounds.

Located in Cocoville, District 8, Between Marksville and Mansura, Avoyelles Parish.

The capital of a populous Indian Province, and site of the Great Mound, 80 feet high. Hernando de Soto arrived here March 29, 1542, and he later returned to fight his last battle here.

One half mile west was one of four forts built by Confederates in May, 1863, to prevent the ascent of Federal gunboats on the Ouachita River. It was abandoned 1863, but was reoccupied in 1864.

Intrepid Spanish conquistador who traversed half of North America, died near here at the Indian Village of Guahoya, May 21, 1542. He was buried in the Mississippi River, which he discovered.

Within this site is the probable site of the prehistoric city of Aminoya. After attempting to reach Mexico, Luis de Moscoso, De Soto’s successor, led his men back here. From here they started down the Mississippi River to the Gulf of Mexico in brigantines they had built.

James Bowie, wounded as a second in Wells-Maddox duel and wielding the awesome blade of his design, killed Norris Wright September 19, 1827. Modified knife later became famous as The Bowie Knife.

Once an excellent bear and deer hunting area, this community owes its name to President Theodore Roosevelt’s bear-hunting expedition here in October, 1907. This hunt is said to have inspired manufacture of the teddy bear toy.

Originally named O’Hara’s Switch. Renamed Roosevelt in honor of President Theodore Roosevelt, who hunted bear in the area in October, 1907. He recorded his adventures here in an article entitled In the Louisiana Canebrakes.

Here in 1775, Francois Bonaventure, French Indian Trader, built a house on 2000-acre tract and named the plantation Old Cabbins He was well established when Don Juan Filhoil came into this region.

On this site, granted by the Spanish government, dwelled Tusquahoma, chief of the Choctaw Indian tribe of fifty families, from about 1785 to 1820, when the land was sold to Stephen Maddox and the tribe moved west.

Near this site was the Taensa village, visited by LaSalle, Tonti, Father Membre in 1682 explorations. In 1699-1700 Father Montigny made peace between the Taensa and Natchez and established a mission. By 1706 the Taensa were forced to move by the Chickasaw and Yazoo.

About 1000 B.C. a notable prehistoric culture flourished on this Indian site in the lower Mississippi Valley. The Octagonal village terraces, the immense mounds and the stone artifacts were unique for early agriculture, prepottery people.