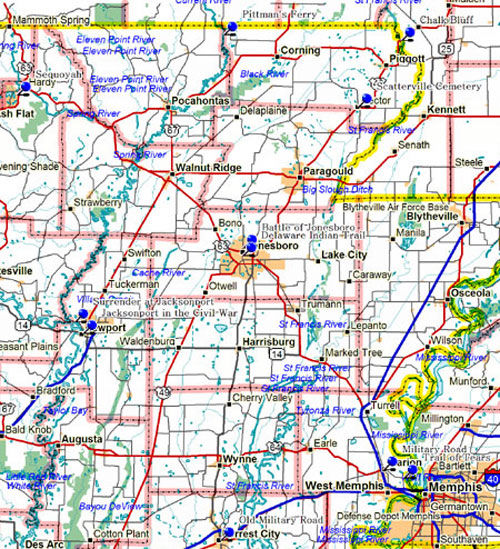 Historic plaques and a walking trail illustrate the history of this site in Northeast Arkansas. Gen. John S. Marmaduke was forced to fight at this location in May of 1863 in order to ensure a successful retreat from a raid into Missouri. Several other skirmishes took place at this site during the war.

Jacksonport in the Civil War

This was a strategically important site that changed hands several times during the war, It is the site of General Jeff Thompson's surrender of Arkansas forces in 1865. The Jackson Guards formed there in 1861 and 1865. Exihibits are presented inside the restored 1869 courthouse, and a White River paddlewheeler, the Mary Woods II, is open to the public. This site served as headquarters for several Generals, including General Marmaduke. A Confederate Monument is located on the courthouse grounds. Recently added to the Civil War Trust's Civil War Discovery Trail. Located on Arkansas 69 north of Newport

This small 1863 battle took place at the Craighead County Courthouse in Jonesboro. It seems that Company D of the 1st Wisconsin Infantry captured several Confederate soldiers just south of the town. These soldiers were taken to the Courthouse and the Federals ensconced themselves in the courthouse and neighboring buildings. An Arkansas unit under the command of Captain Adair learned of the capture and resolved to retake the town and rescue the prisoners. Witnesses state that the Confederates attacked from woods on the west side of the courthouse and after a spirited fight drove the Federals from the buildings and forced them to abandon the town. 2 Confederates were killed in the fight and approximately 7 Federals were killed. Camp 1655 members continue to research this battle. Craighead County Courthouse, Jonesboro

First highway constructed in Arkansas, Hopefield to Little Rock, extended to Fort Smith and into Indian Territory Oklahoma. Built by the United States under the supervision of the quartermasters Dept. of the U.S. Army Survey was begun Oct. 1824 and construction commenced soon thereafter for the primary purpose of transporting Chickasaw and Choctaw Tribes of Indians from Mississippi to the Indian Territory. Starting in 1832 soldiers and transports for the Mexican War 1845 to 1848 used this road, as well as soldiers and transports during the War Between the States, 1861 to 1865. Pioneers used this route to Arkansas and the west. / Crittenden County, Marion

Near this point Highway No. 1 intersects the route of the Old Military Road which connected Memphis and Little Rock. Begun in 1826, this road was built under the supervision of Lt. Charles Thomas of the United States Army. John Pope, third governor of the Territory of Arkansas, directed later improvements to the road. Thousands of Indians and pioneers passed this point on their way to new homes in Arkansas, Oklahoma, Texas and the West. St. Francis County, Old Military Road Highway No. 1

At this point on Current River in 1803 William Hix opened the first river ferry in the area now known as Arkansas. Hix's Ferry, later called Pitman's Ferry, was the northern gateway into Arkansas along the Southwest Trail. During the Civil War this crossing was used by northern and southern forces and by armed bands of lawless bushwackers. Union and Confederate troops engaged in skirmishes at Pitman's Ferry on July 20, October 27 and November 25, 1862. Randolph County Supoly (N) It is located near Rees Grocery on Hwy. 166

This early settlement, located on the military road which connected Chalk Bluff and Gainesville, is said to have acquired its name because stores and houses were "scattered" over the area. Civil War skirmishes were fought here August 3, 1862 and March 28, 1863. The cemetery is the burial place of the pioneers of Clay County. Clay County in Rector (on the old military road which connected Chalk Bluff with Gainesville)

Born in the Indian town of Taskigi, Tennessee in 1770 to a Cherokee maiden and white man, Sequoyah grew up among the Cherokees. After being crippled in a hunting accident, he had time to think about the white man's method of communication by writing. Despite the taunts of the young braves, he began to work on a phonetic alphabet. Twelve years later in 1821, he published a system of writing that, at first, contained 40 characters. His first pupil, his six-year-old daughter, Ahyokah, was the first to learn, and her ease in using the alphabet convinced the Council of Chiefs to adopt it. Later it was extended to 86 sounds. In 1828 "The Cherokee Phoenix" was published and many Cherokees could read and write. Sequoyah died in 1843. Sharp County, Cherokee Village

Here on June 9, 1865 Confederate General Jeff Thompson formally surrendered the men of Northern Arkansas to Union Military Authorities; more than 5000 officers and enlisted men who had served under them. They were paroled. There also were several hundred more Confederate soldiers from other commands. At the time of surrender the Confederates were almost without food and weapons and most all of their equipment except dugout canoes. General Thompson made his farewell address to the men from the deck of the Arkansas.

The next two miles is a part of Military Road used in transporting Indians to Oklahoma territory. Crittenden County, Mound City.