Back to Albuquerque, New Mexico Maps 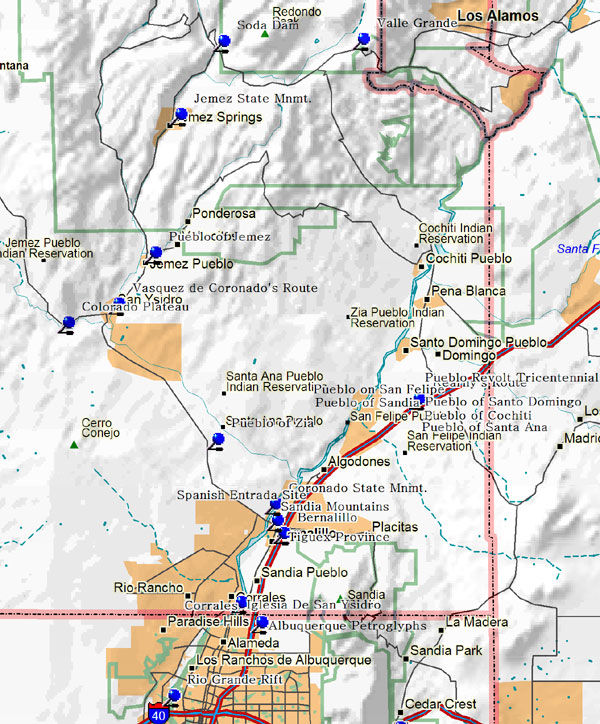 Over 15,000 petroglyphs have been carved into the lava rock which covers the mesa west of the Rio Grande. The earliest of these rock drawings were made by prehistoric inhabitants almost 3000 years ago. Many others were added by Pueblo peoples and later by Spanish explorers and settlers. This gallery of ancient art is interpreted at Petroglyph State Park 6 miles south of here.

The Pueblo Indian province of Tiguex, in the area of Bernalillo, served as winter headquarters for Francisco Vasquez de Coronado in 1540-42 during his explorations of the southwest. Bernalillo was founded after the Spanish reconquest of New Mexico by Diego de Vargas in 1692. Vargas died here in 1704.

From this point, the Colorado Plateau extends across northwestern New Mexico into northeastern Arizona, southeastern Utah, and southwestern Colorado. A colorful landscape of mesas, and canyons, it is underlain by natural mineral, oil, and gas resources locked within sedimentary strata deposited millions of year ago.

Kuaua Pueblo was one of the Rio Grande Valley villages visited by Francisco Vasquez de Coronado in 1540. He called this region the Tiguex Province because its inhabitants spoke a common language, Tiwa. Abandoned before the 1680 Pueblo Revolt against Spanish rule, this large and important site has been excavated and partially restored.

Spanish colonization of this region, once the location of many Tiwa Indian pueblos, began in the 17th century. Corrales is named for the extensive corrals built here by Juan Gonzalez, founder of Alameda. In the 18th century this rich farming area was subject to Comanche attacks, and was raided by Navajos as late as 1851.

San Isidro, patron saint of farmers, is the traditional guardian of the valley. The present church is the third to bear his name. Spanish, and later, United States garrisons used the valley as a base of defense to protect the river settlements of Albuquerque and Bernalillo, and nearby pueblos and towns from Navajo raids.

This church was constructed in 1868 following a flood which demolished an earlier building. Dedicated to San Ysidro, patron of farmers, the church incorporates materials salvaged from the original structure. The building is one of the finest surviving examples of mid-19th century New Mexico religious architecture. It is maintained by the Corrales Historical Society and used for community functions and other cultural events.

The village of Giusewa was occupied by ancestors of the Jemez Indians before the arrival of the Spanish in 1541. Its ruins lie close to those of the great stone mission church of San Jose de Giusewa, which was built by the Franciscans around 1622.

In 1846, U.S. forces under Brigadier General Stephen Watts Kearny invaded New Mexico and, on August 18, raised the U.S. flag in Santa Fe. Afterwards, he marched unopposed into Bernalillo and Albuquerque. As a result of this occupation, New Mexico passed from the jurisdiction of Mexico to that of the United States.

Cochiti was established in the 1200s by Keresan-speaking Indians who came here from villages located at the present-day site of Bandelier National Monument. European contact was slight until Onate's colonization in 1598. In the 1960s, the mission church of San Buenaventura de Cochiti was restored to its nineteenth-century appearance.

Jemez is the sole surviving pueblo of the seven in the "provincia de los Hemes" noted by Spaniards in 1541, and the last at which the Towa language is still spoken. In 1838 the remaining inhabitants of Pecos Pueblo moved here. The mission of San Diego de Jemez was last rebuilt in the 1880s.

San Felipe, named for St. Philip the Apostle by Spanish explorer Francisco Sanchez Chamuscado in 1581, was abandoned during the Pueblo Revolt of 1680. Reestablished on the mesa top, this too was abandoned before 1706, when the pueblo was constructed on its present site. The mission church appears today much as it did in the 18th century.

Sandia is one of the pueblos of the Tiguex Province visited by the Vasquez de Coronado expedition in 1540. Abandoned during the Pueblo Revolt of 1680, when many Tiwas fled to Hopi country, it was resettled by Tiwa-speaking refugees and a few Hopis in 1748. Its church, built in 1864, was renovated in 1976.

The Keres-speaking pueblo of Santa Ana was established on its present site in 1693, as part of Diego de Vargas' reconquest of New Mexico. The spot, exposed to flooding, was poorly suited for farming, and today the residents live on their farms along the Rio Grande instead of the pueblo, which is used as a ceremonial site.

Gaspar Castano de Sosa camped here in 1591, and in the 17th century Santo Domingo served as headquarters of the Franciscan Order in New Mexico. It has had several different churches. The present one was built around 1890 by Father Noel Dumarest, and retains the traditional ecclesiastical architecture of this region.

In 1583 Antonio de Espejo recorded this pueblo as one of five in the Province of Puname. Following the sacking of Zia by Spanish troops in 1689, the pueblo was reestablished, but never attained its former size. The Zia ancient sun symbol is incorporated in the design of the state flag of New Mexico.

On August 10, 1680 the Pueblo Indians rose in revolt against Spanish rule. Forced to evacuate Santa Fe by the Tanos, Tewas and Tiwas, Governor Otermin led the retreating colonists south through the lands of the Keres pueblos, whose signal fires could be seen on the mesas, passing through the Pueblo of Santo Domingo on August 24.

Albuquerque is situated at the juncture of two major blocks in the earth's crust. One block, the Sandia Mountains, is tilted upward toward the east along the Sandia fault. West of the fault, the Rio Grande rift has dropped downward forming a great trough which has subsided 26,000 feet from the rim of the mountains.

A giant block of the earth's crust tipped up sideways, the Sandia Mountains are a range of the Basin and Range province in New Mexico. The adjoining Rio Grande rift contains deep aquifers that provide water for the large population center of Albuquerque.

This spectacular formation has built up over the centuries by deposits of calcium carbonate from a spring that bubbles to the surface at this point. The river flows under a dome that is still building. The dam is 300 feet long, 50 feet high, and 50 feet wide at the bottom.

Among the many prehistoric and historic sites located nearby is a camp where Francisco Vasquez de Coronado's troops may have spent the winter of 1540-41. Coronado also visited the ancient pueblo of Kuaua located to the north. Kuaua's ruins are preserved and interpreted at the Coronado State Monument near Bernalillo.

More than one hundred prehistoric and historic pueblos and other archeological sites and over 15,000 petroglyphs or rock art sites give ample evidence of the occupation of this valley for at least 12,000 years. Spanish explorers who came into the area in the sixteenth century gave the name "Tiguex Province" to the dozen or more Tiwa-speaking Indian pueblos (towns) they found in the middle Rio Grande Valley.

About one million years ago, the magnificent valley before you was formed by collapse, after a series of tremendous volcanic eruptions ejected a volume of material more than 500 times greater than the May 1980 eruptions of Mt. St. Helens. This event climaxed more that 13 million years of volcanism in the Jemez Mountains. Minor volumes of magma, leaking to the surface as recently as 50,000 years ago, formed the dome-like hills between you and the skyline to the north, which is the opposite wall of the enormous Valles Caldera. The heat from young volcanism makes this area attractive for geothermal energy.

Often called "the world's largest crater," Valle Grande is actually a giant caldera, formed a million years ago when a series of volcanoes collapsed, and whole mountains were engulfed forming the great valley below this highway.

Francisco Vasquez de Coronado, preparing to spend his second winter in New Mexico, sent out expeditions from Tiguex, near Bernalillo, in the fall of 1541 to gather supplies. Captain Francisco de Barrionuevo went as far west as Jemez Pueblo, then visited others as far north as the Rio Chama.