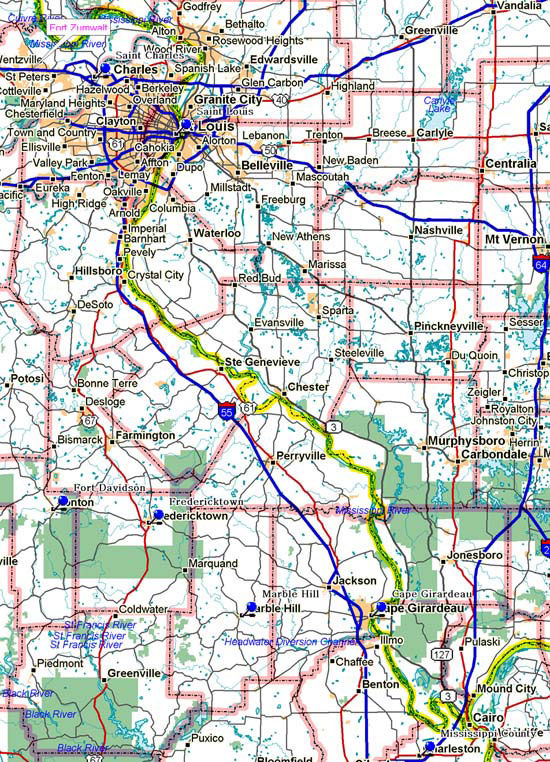 Marker Topic: Cape Girardeau
County: Cape Girardeau
Marker Text: Founded as an Indian trading post in 1793 by French Canadian Louis Lorimier. Probably named for Giradot, a trader at Cape Rock. In 1795 Lorimier became commandant of Cape Girardeau District, most American of the five Spanish Districts, later one of Missouri's first five counties. Germans from the states also settled here. Shawnee and Delaware Indians were given Spanish land grants nearby to act as a buffer against the Osages. At time of American occupation, 104, the district was third in population of the five districts, yet had no white village. Lorimier laid out town of Cape Girardeau, 1806, to be the seat of government. Delay in honoring his Spanish land grant halted growth. The county seat was then moved 10 miles to Jackson, 1814. Established there were a U.S. Land Office, 1818; a newspaper, Missouri Herald, 1819; and academy, 1820; and State's first long distance telephone line, 1877.

Union forces occupied the town, 1861-1863, and built defense forts A, B, C, and D. In 1863 the Federals under McNeil repulsed a Confederate attack under command of Marmaduke. Among well marked historic sites in town is Fort D. In Lorimier Cemetery are graves of the town founder Louis Lorimier; U.S. Senator Alexander Buckner, and notable builder of railroads and Missouri historian Louis Houck.

Marker Topic: Crawford County
County: Crawford County
Marker Text: In territory ceded by Osage tribes in 1808, Crawford County was roamed by the Delaware and Shawnee into the period of settlement by Southern pioneers in the early 1820s. Steelville, the county seat, was laid out in 1836, and named for James Steel who sold the 40-acre townsite for $50. During the Civil War, guerrilla raids and troop movement devastated the area. The Southwest Br. of the Pacific R.R. (now Frisco) built through Bourbon, Leasburg, and Cuba in the county in 1860 was almost destroyed. Union Gen. Thomas Ewing's troops, escaping undetected from Fort Davidson after the battle of Pilot Knob, were overtaken by Confederate Army units at Leasburg and a 36-hour engagement ensued Sept. 29-30, 1864. Confederates withdrew before Union reinforcements arrived. The site is marked.

Marker Topic: Fort Davidson
County: Iron
Marker Text: Surrounded by the rugged splendor of the highest peaks of the Missouri Ozarks, Arcadia Valley lies in the geologic center of the Ozarks, one of the world's oldest mountain regions. The valley towns are in an area settled in the iron mining boom of the 1840s-50s when Pilot Knob here and Iron Mountain in nearby St. Francois County were thought to be of solid iron.

During the Civil War, the area was early occupied by Union forces to protect the Iron Mountain Railroad, completed between here and St. Louis, 1858. General Ulysses S. Grant's first command post after his commission as a general was here, Aug. 18, 1861. Fort Davidson, the earthen redoubt here, was defended by over 1000 Federals under General Thomas Ewing against some 12,000 Confederates under General Sterling Price, Sept. 27. 1864. As a result of the engagement here at Pilot Knob, Price lost over 1200 men to Ewing's 200, and was halted in his drive to St. Louis. The fort, built in 1863, named for Gen. J.W. Davidson, is owned by Clark National Forest and is maintained by the U.S. Forest Service.

Marker Topic: Fredericktown
City: Fredericktown
County: Madison
Marker Text: The Battle of Fredericktown, a Civil War engagement, occurred near here, Oct. 21, 1861. Some 2000 pro-Southern State Guards led by Col. M. Jeff Thompson, attempting to get control of southeast MO, were defeated by 4500 Union troops under Col. J.B. Plummer. Fredricktown, in north Madison County, lies near the geologic center of the Ozarks in an area of unique minieralization in the Mississippi Valley.

Marker Topic: Mississippi County
County: Mississippi County
Marker Text: In Mississippi County is historic Belmont Battlefield. There on Nov. 7, 1861, Gen. Ulysses S. Grant with 3114 troops saved the forces of Col. R.J. Oglesby from possible capture by engaging 2500 Confederates under Gen. G.J. Pillow in a 6-hour battle. Union losses were 485; Confederates, who held Belmont, lost 641. A chain was put across the river from Confederate held Columbus, Kentucky, to Belmont in a futile effort to halt Union gunboats. Part of the chain is in Columbus-Belmont Battlefield State Park, Kentucky. From 1861 to 1865 the county suffered continual war activity.

Marker Topic: Saint Charles
County: Saint Charles
Marker Text: Prominent early settlers were Daniel Boone and his family. Some 25 miles southwest is home of Boone's son Nathan. The Boon's Lick and Salt River trails began at St. Charles. During the war of 1812 military activity in Missouri centered at Portage des Sioux, a 1799 French settlement 14 miles northeast. In Fort Zumwalt State Park, 20 miles west, stand the remains of one of many family forts of the area erected against Indian attacks.

Here the legislature, by affirming in a "Solemn Public Act" that the rights of any U.S. citizen would not be abridged, met the final Congressional requirement for statehood. Debate of the slavery issue that greeted Missouri's petition for statehood resolved itself in the Missouri Compromise of 1820. Slavery was prohibited north of 36'30" except in Missouri. On August 10, 1821, Missouri became the 24th state.

The Lewis and Clark expedition began its ascent of the Missouri in 1804.

Marker Topic: Saint Louis
County: Saint Louis
Marker Text: Here on March 10, 1804, Upper Louisiana, from which have come six states and parts of seven others, was transferred to the U.S. In Missouri, the Civil War began here at Camp Jackson in 1861. St. Louis became the federal military base. It is of note that the Dred Scott Case began here. Through this city of movement, a famous river port, early transportation hub, passed the westward surge of fur traders, explorers, and settlers. The Lewis and Clark Expedition returned here in triumph in 1806.