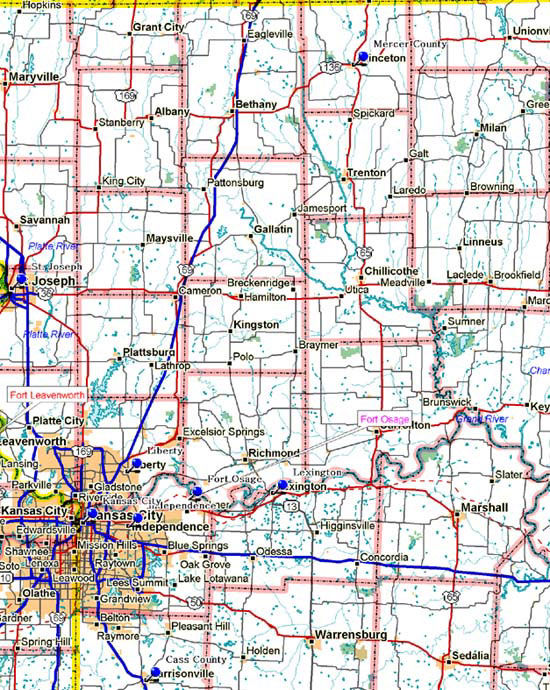 Marker Topic: Cass County
County: Cass
Marker Text: Cass County was organized in 1835 and named Van Buren. The Free-Soil Party affiliation of Martin Van Buren led to name change in 1849 for Democrat Lewis Cass. Torn by strife in the 1854-59 Missouri-Kansas Border War, Cass was one of the counties named in Union Gen. Thomas Ewing's Order No. 11. Issued Aug. 25, 1863 to curb guerrilla warfare, it forced people from their homes except in or near Union-held Pleasant Hill and Harrisonville. Near Freeman is site of the "Battle of Morristown," where about 500 men under Union Colonel H.P. Johnson, who was killed, routed some 100 State Guards led by Col. H.I. Irvin, Sept. 1861.

Pleasant Hill and Harrisonville grew as shipping points. In 1872 the county was victimized by a county court railroad bond swindle. Two of the guilty officials, out on bond, and a friend, attempting to leave, were killed by a mob which boarded their train at Gunn City. No one was eve punished. It took some 50 years to pay the bond debt.

At Belton is buried temperance agitator Carry (Moore) Nation (1846-1911). Her grave marker states "She hath done what she could."

Marker Topic: Fort Osage
County: Jackson
Marker Text: Westernmost frontier outpost of the U.S. government until 1819. One of 28 fortified Indian trading posts or "factories' operated on our Indian frontiers, 1795-1822, to promote and protect national expansion. In 1808 men of the U.S. Infantry and of the Territorial Militia, directed by William Clark, began fort construction. The location was a strategic spot on the Missouri named Fort Clark. The Osage Purchase Line was set here, 1808. Great and Little Osages, obeying a summons to settle near the post, ceded their land east of a line from the fort south to the Arkansas and claims to land north of the Missouri. In return they received annuities, trading privileges, and other considerations. Defended by blockhouses and a stockade, the post with George C. Sibley as a trader or "factor" played an important part in opening the Louisiana Purchase to settlement and to trade.

The fort was a port of entry to the West for fur expeditions and a last outpost for first successful expeditions to Santa Fe. Federal survey of the famed Santa Fe Trail started from Fort Osage, 1825. Among famous guests at this frontier fort were the Lewis and Clark guide, Sacagawea, Mandan Chief Shahaka; fur traders Chouteau, Lisa, Henry, Menard, Hunt, Crooks, Ashley; naturalists Bradbury and Nuttall; and writer Brackenridge. Daniel Boone at 82 rested at this fort on his last long hunting trip. Closed during the War of 1812, the fort was regarrisoned in 1815. In 1819 the Army's Yellowstone Expedition, with the Long exploring party on the steamer Western Engineer, moved the garrison to a post at Old Council Bluffs.

Marker Topic: Independence
City: Independence
County: Jackson
Marker Text: Independence, famed "City of the Trails" was for two decades the starting point of the great western trade and travel routes to Santa Fe, Oregon and California. Settled mainly by Southerners on land ceded by U.S. by the Osage Indians in 1825, it is built on the site chosen in 1827 for the seat of Jackson County, organized in 1826 and named for Andrew Jackson, 7th U.S. President. In the Mexican War, 1846-48, the county supplied Co. A of Doniphan's regiment of Missouri volunteers. William Gilpin, later first governor of Colorado Territory, but then of this town, was regimental major. Independence, within the orbit of Union control during the Civil War, was twice held by Confederate troops. In 1863 Union General Thomas Ewing, by military order, evicted rural residents of this and other border counties to curb guerrilla warfare. The devastating cruelty of this action is shown in George Caleb Brigham's painting "Order No. 11", which he began here in 1865.

Marker Topic: Kansas City
County: Jackson
Marker Text: During the Civil War, the city languished under Union occupation in an area almost depopulated by military order and guerrilla warfare. The Battle of Westport, October 23, 1864, ended the Confederate cause in Missouri. In this "Gettysburg of the West", 20,000 Federals commanded by Pleasanton and Curtis, defeated 9000 Confederates led by Price, Shelby and Marmaduke, in bitter conflict. This site is marked in Loose Park. In 1865 the Missouri Pacific R.R. reached this point, and here the Missouri River was bridged for the first time in 1869. Now six bridges cross the river here.

Marker Topic: Lexington
County: Lafayette
Marker Text: The cannonball embedded in courthouse column is relic of Confederate victory in the 1861 Battle of Lexington. In 1861 Lexington was early regarded as a strategic military prize and was occupied by Union troops to prevent the State Guard forces north and south of Missouri River from uniting. Gen, Sterling Price moved on Lexington to break this Federal control and a bitter three-day battle ensued, Sept. 18-20, 1861, culminating in an attack called the Battle of the Hemp Bales. The Federals under Col. J.A. Mulligan were defeated.

Marker Topic: Liberty
County: Clay
Marker Text: Settled about 1820, mainly by southern pioneers, the town became a seat of justice for Clay County, 1822. Many settlers of northwest Missouri and the far west outfitted here, as did caravans during the '49 Gold Rush. Liberty Landing, 4 miles south, was an important Missouri River port. The Mexican War, 1846-1848, with promise of southwest territory and trade, was popular in Missouri and the State raised 1358 troops. Alexander W. Doniphan of Liberty led the First Regiment of Missouri Volunteers on a brilliant expedition covering 3600 land and 2000 water miles in 12 months, highlighted with victory at Battle of Sacramento, 1847. The site of the U.S. Arsenal at Liberty Landing, raided in 1855 by proslavery men, recalls the Kansas-Missouri border disputes over the extension of slavery. The arsenal was raided again, April 1861, constituting the first civilian Civil War hostility against the Federal government in the State. During and after the War, the area suffered greatly from guerrilla and outlaw depredations. Jesse James (1847-1882), America's most fabulous outlaw, was born near Kearney, 10 miles northeast. Jesse and his brother Frank were members of Quantrill's Confederate guerrilla band.

Marker Topic: Mercer County
County: Mercer
Marker Text: Calamity Jane, colorful character of the western frontier, was born Martha Jane Canary near Princeton about 1852. By her claim she was pony-express rider and scout with Gen. George Custer. She died in 1903 and is buried by Wild Bill Hickok in Deadwood, S. Dakota.

Marker Topic: Saint Joseph
County: Buchanan
Marker Text: Renowned city of the Pony Express, St. Joseph was first settled as a trading post for the American Fur Company by Joseph Robidoux, 1826. Later he acquired the site and laid out a town in 1843. St. Joseph became an outfitting point for settlers in northwest Missouri and travelers on the Oregon-California trail. It was also a supply base for army posts and western gold mining camps.

Here was the terminus of the first railroad to cross Missouri, the Hannibal and St. Joseph in 1859. The railway postal car, developed by W.A. Davis of St. Joseph, was first used on this line in 1862. April 3, 1860 the Pony Express was put into operation between here and Sacramento, California, by the freighting firm of Russell, Majors and Waddell. Operated as a relay it met the need for speedy mail service to the West and popularized the central overland route. About 1982 miles were covered regularly in 10 days and 190 relay stations, 420 horses, and 80 riders were used. The record run was 7 days, 17 hours. The Pony Express discontinued in October 1861. The telegraph then reached the coast.