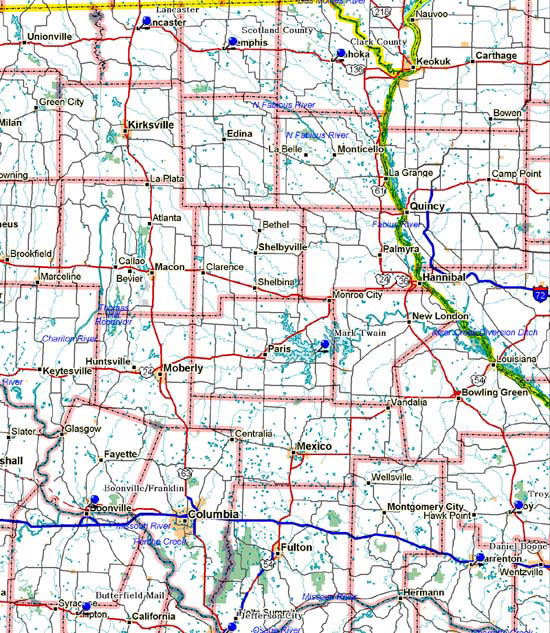 Marker Topic: Boonville/Franklin
County: Howard
Marker Text: Early prosperous river town, first settled by Hannah Cole in 1810, a widow, and her 9 children. A neighborhood fort was built at her place in the War of 1812. In 1817 the town, named for Daniel Boone, was laid out and became the seat of newly organized Cooper County, named for Sarshall Cooper, pioneer.

On June 17, 1861 here in the first engagement of the War Between the States (Civil War) in Missouri, the Battle of Boonville, Federals under Gen. Nathaniel Lyon routed untrained State Guards under Gen. John S. Marmaduke.

Thespian Hall (now Lyric), oldest theater in use west of the Alleghenies, was built 1855-57. Kemper Military School opened as a boarding school in 1844. In 1889 the Missouri Training School for Boys was opened.

Franklin, founded across the river from Boonville, 1816, was once the metropolis of the Boon's Lick Country, a central Missouri region taking its name from a salt lick in the area worked by the sons of Daniel Boone. Here was the first land office north of the Missouri River, 1818, and the first newspaper, 1819, the "Missouri Intellegencer and Boon's Lick Advertiser."

First steamboat up the Missouri, the "Independence" docked, 1819. From 1817 to 28 Franklin served as seat of Howard County Encroachment of the river brought town abandonment beginning with the laying out of New Franklin, 1828. From Franklin, William Becknell, "Father of the Santa Fe Trail" led the first successful trading expedition to Santa Fe and took the first wagons over the route in 1822. Jacks and jennys brought back were the founding stock of Missouri's mules. John Miller, governor 1826-32, lived here and Kit Carson was apprenticed to a saddler.

Marker Topic: Clark County
County: Clark
Marker Text: Missouri's first northern border county, organized in 1836, is named for explorer William Clark. In 1839 Iowa Territory and the State of Missouri mobilized troops on the nearby border in a boundary dispute called the Honey War for the bee trees in the area. Compromise averted hostilities. In 1851, the Supreme Court finally set the Missouri-Iowa boundary at the old 1824 Iowa, Sauk, and Fox Indian Purchase line. Clark County is distinguished as the site of the Battle of Athens, August 5, 1851, one of two northernmost Civil War skirmishes. The other was at Salineville, Ohio, July 26, 1863. At Athens, about 500 Union troops under Col David Moore routed some 800 pro-Southern state guards under Col. M.E. Green to save Iowa from Civil War action. The famed Anti-Horse Thief Association was first organized by David McKee at Luray to the west in 1854 to curb frontier banditry by capture and legal prosecution of criminals.

Near St. Francisville on the Des Moines in the Black Hawk War of 1832 Missouri's toops built Fort Pike when it was feared that the Iowa, Sauk and Fox Indians might invade this land once theirs. Kahoka, seat of Clark County since 1872, was laid out in 1856 and named for the Cahokia Indians.

Marker Topic: Daniel Boone
County: Warren
Marker Text: Daniel Boone, universal symbol of the American frontier, was 65 when he came to Upper Louisiana, now Missouri, in 1799. His wife Rebecca was 60. The Spanish lieutenant governor granted Boone 845 acres nearby here on Femme Osage Creek, Boone did not settle on this grant, instead he and his wife made their home with their children. Two of their sons, Daniel Morgan and Nathan, held land in the locality of the Femme Osage, near the present Matson and Defiance in St. Charles County. Their daughter and son-in-law, Jemima and Flanders Callaway, lived near the present Marthasville in Warren County.

Boone served as a syndic or judge for the Femme Osage settlements from 1800 to 1804. Near the Nathan Boone House, still standing, five miles from Defiance, is the site of "Judgement Elm" where Boone is said to have held court. The trace to the saline in Howard County where Daniel Morgan and Nathan boiled salt about 1807 became the Boon's Lick Trail. In the War of 1812, Daniel Morgan was a captain and Nathan a major in the Missouri Rangers. Daniel Boone died at the home of his son Nathan in 1820 and was buried beside his wife, Rebecca Bryan Boone, overlooking the Missouri River near Marthasville. In 1845 the bodies were removed to Frankfort, KY. A marker stands at the original gravesite.

Marker Topic: Jefferson City
County: Jefferson
Marker Text: The capital of Missouri, named the City of Jefferson in honor of the third U.S. President, is built on a site chosen by the First General Assembly, 1821, for a seat of government. St. Charles, until 1826, was the temporary capital while the new town was established here. Today's magnificent capitol is built of native Carthage marble.

Marker Topic: Lancaster
County: Schuyler
Marker Text: Schuyler County was a part of territory ceded by Iowa, Sac and Fox tribes in 1824. In the Civil War, troops of both sides and guerrilla bands overran the county. Union forces occupied Lancaster at times. Sharp skirmishes occurred here on November 24, 1961 and on Sept. 7, 1862. With the close of the war, prosperity returned.

Marker Topic: Mark Twain
County: Monroe
Marker Text: Mark Twain (Samuel Langhorne Clemens) was born in the nearby village of Florida Nov. 30, 1935. Twain spent many summers on his Uncle John Quarles' farm near Florida after his parents moved, in 1939 to Hannibal, MO. It was from his boyhood in Hannibal and here that he drew material for "Tom Sawyer" and "Huckleberry Finn." In 1835 Twain left a job on his brother Orion's Hannibal newspaper to become a printer, a Mississippi River pilot, and a miner, writer and lecturer in the West where he adopted the pen name, Mark Twain (two fathoms - a river measure).

Marker Topic: Tipton/Butterfield Overland Mail Terminus
County: Montineau
Marker Text: Historic town in the annals of western transportation, Tipton, in 1858-59 was the eastern stagecoach terminus of the famous Butterfield Overland Mail. New York expressman John Butterfield (1801-69), under contract to carry mail and passengers between St. Louis and San Francisco over the Southern Route on a twice-a-week, 25-day schedule, used Tipton as stage terminus because the Pacific R.R. (Mo. Pac.), completed to this point, could be used for the first 160 miles.

The first westbound mail and passengers carried by Butterfield stage left Tipton, Sept. 16, 1858, and arrived in San Francisco 24 days later after traveling some 2700 miles across rivers, deserts, mountains, and through hostile Indian territory. At one time Butterfield had 1500 horses and mules, 200 coaches, relay stations about 20 miles apart, and at the peak, 2000 employees.

Tipton was replaced as terminus when the railroad reached nearby Syracuse in the summer of 1859. In 1861 because of the Civil War, traffic was transferred from the Southern to the Central Route. Butterfield coaches traveled south from Tipton to Arkansas making stops at relay stations in Missouri.

Marker Topic: Troy
County: Lincoln
Marker Text: Troy, laid out on the site of Wood's Fort in 1819, lies on an old Sac and Fox Indian campsite where first settlers Joseph Cottle and Zadock Woods built their cabins in 1801. It was the Sac and Fox tribes, outraged by their 1804 land cession which included this region, who carried the War of 1812 west of the Mississippi into north Missouri.

To defend their homes, pioneers in this area, which is now Lincoln County, aided by Rangers under Nathan Boone (Daniel Boone's son) built Woods, Howard, Stout, Clark, and Gap au Gris forts as a first line of defense. At Fort Cap au Gris, Maj. (later U.S. Pres.) Zachary Taylor's command rendezvoused Sept. 1814 and five months after the war, at Fort Howard on May 24, 1815, Black Hawk's band skirmished with settlers and Rangers in the Battle of the Sink Hole. In 1824 the Sac and Fox finally gave up all claims to the region.