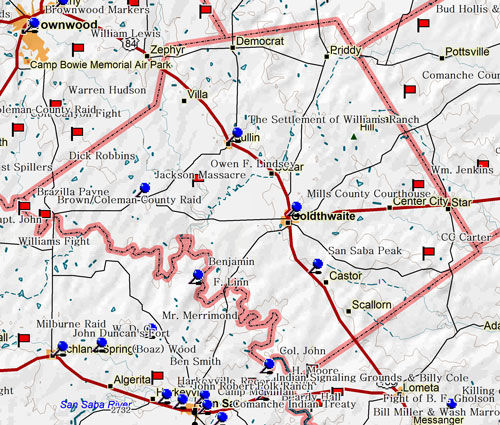 Marker Title: Jackson Massacre
City: Goldthwaite
County: Mills
Year Marker Erected: 1998
Marker Location: 14.2 mi. W of Goldthwaite on FM 574; 3.3 mi. NW of FM 573.
Marker Text: Settlers Moses and Lydia Jackson set out one morning in October of 1858 with four of their seven children to spend the day with friends. As they neared their destination they encountered a small party of Indians, possibly Comanches. Louis and I.J. Jackson and their parents were killed immediately. The two middle children, Joshua and Rebecca, were abducted, only to be abandoned after almost two weeks. They walked for two days before being recovered by a search party of settlers and Texas Rangers near Sweetwater.

Marker Title: San Saba Peak
City: Goldthwaite vicinity
County: Mills
Year Marker Erected: 1986
Marker Location: 7 miles south of Goldthwaite on US 183 right-of-way, in Lady Bird Johnson Roadside Park
Marker Text: Rising to an altitude of 1,712 feet, San Saba Peak is an oblong promontory with rimrock edges on the north and west sides. The Spanish Governor of Texas, Don Juan Antonio Bustillo y Cevallos, named the ancient landmark in 1732. Tales of lost silver mines have centered on the surrounding area for centuries. Inhabited by early Indians, San Saba Peak has been a landmark for pioneers, surveyors, and cowboys; the site of battles between Indians and early settlers; a signpost on the Fort Phantom Hill supply road; a register for western travelers; and a setting for Easter services. Texas Sesquicentennial 1836-1986

Williams Ranch, The Settlement of

Marker Title: The Settlement of Williams Ranch
Address: US 84
City: Mullin
County: Mills
Year Marker Erected: 1976
Marker Location: US 84, Mullin.
Marker Text: Once a prominent frontier town, Williams Ranch grew up around the homestead of cattleman John Williams (1804-1871), who came to this area in 1855. The community flourished during the Civil War (1861-1865) because of trade with Mexico and by 1874 had stores, saloons, a hotel, mill, and blacksmith shop. In 1875 Henry Ford and J.M. Parks bought most of the land in the village and platted a town site. They proposed the name "Parksford" but "Williams Ranch" prevailed when the post office opened in 1877. The community was a stage stop and a roundup point on the western cattle trail. It claimed the first hotel, newspaper, telegraph, and public school in Brown and Mills counties. In 1881 it was one of the towns considered as a site for The University of Texas. Williams Ranch reached its peak of activity in the early 1880s, with a population of over 250. The settlement began to decline when the railroad bypassed it in 1885. An outbreak of mob violence was quelled by the Texas Rangers in 1887. By 1892 the post office and all businesses had closed. Today the site is marked by the natural springs that attracted the original settlers and by Williams Ranch Cemetery, burial place of many pioneers and their descendants.

One morning Mr. Black, who lived in Mills County on Elliott's creek, about ten miles west of Lometa, was in search of his oxen. He crossed his field and was going in the direction of his ox-bell. This was during 1864. When Mr. Black reached the timber several Indians ambushed and killed him.

Note: Author personally interviewed: R. Kolb, and Jno. Nichols, who were living in that section at the time.