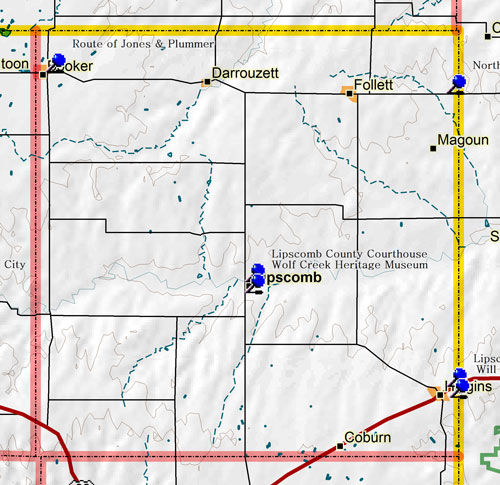 Historical Markers (click on a topic to jump to that section).

Marker Title: Route of Jones & Plummer Trail
Address: SH 15 and SH 23 junction
City: Booker
County: Lipscomb
Year Marker Erected: 1968
Marker Location: intersection of SH 15 and SH 23, Booker
Marker Text: Established about 1874, when used by the freighting firm of Ed Jones and Joe Plummer to haul tons of buffalo hides from their general store in Lipscomb County to Dodge City, Kansas. Also, in its early days, this trail carried crucial supplies to Generals Nelson Miles and Philip Sheridan during their famous 1874 Indian campaign. Materials for building Fort Elliott, at Mobeetie, also came over the trail. The fort then became southern terminus for the route; Dodge City, northern. In its later years (until 1885), it became a cattle trail. (1968)

Marker Title: Lipscomb County Courthouse
City: Lipscomb
County: Lipscomb
Marker Text: Established in 1886 and organized the following year with Lipscomb as county seat, Lipscomb County was named for Abner S. Lipscomb, an associate justice of the Texas Supreme Court in the 1840s-1850s. A one-story wood frame building served as the first county courthouse. During the first decade of the 20th century, the number of farms and ranches in the county more than doubled, and the population more than tripled that of the 1900 census. In 1915, county voters approved the issuance of bonds for a new, larger courthouse to serve the governmental functions of a growing county. The commissioners court selected William M. Rice of Amarillo as both architect and general contractor for the project. Edward S. Altmiller, who had been the contractor for the 1910 Lipscomb County jail, served as construction superintendent. Rice designed the courthouse in the Classical Revival style, with style-defining features such as the arched doorway and the triangular pediment supported by Doric order columns over the entrance. Design and construction took place primarily during 1916, with final details completed in early 1917. Despite its status as the smallest town in the county, largely the result of being bypassed by the railroad, Lipscomb retains its designation as county seat. The Lipscomb County courthouse, which dominates the town site, continues to function as the center of government and politics for county residents. Recorded Texas Historic Landmark - 2000

Marker Title: Northeast Corner of Texas
Address: SH 15, 8 mi. E of Follett
City: Follett
County: Lipscomb
Year Marker Erected: 1970
Marker Location: from Follett take SH-15, 8 miles east to state line
Marker Text: Established by law in 1850 as intersection of 100-degree longitude and 36-degree, 30' latitude, this point remained in dispute 79 years. Of some nine surveys made to locate corner on ground, almost none coincided. Even so, three blocks were annexed to Texas from Oklahoma (1903, 1929) - to confusion of landowners. One man claimed he went to bed in Oklahoma and awoke in Texas. In 1929 U.S. Supreme Court had a final survey run. Some people with land formerly in Oklahoma could not afford to repurchase it in Texas, but exact site of corner was at last determined. (1970)

Marker Title: Will Rogers
Address: US 60, east side of Higgins
City: Higgins
County: Lipscomb
Year Marker Erected: 1967
Marker Location: from Higgins take US-60, east to park, on east side of town.
Marker Text: One of America's best loved humorists, whose stage act, gently mocking man's foibles, was highlighted by rope tricks learned here in his youth. Born in Oklahoma. In 1898, threatened with discipline for pranks, he left school and came to Texas. He became a cowboy on the Little Robe Ranch near Higgins and made a lifelong friend of young Frank Ewing, son of his employer. In 1902 he joined a wild west show; was famous by 1918. Rogers died in a crash during a globe-circling pioneer flight with aviator Wiley Post, 1935. (1967)