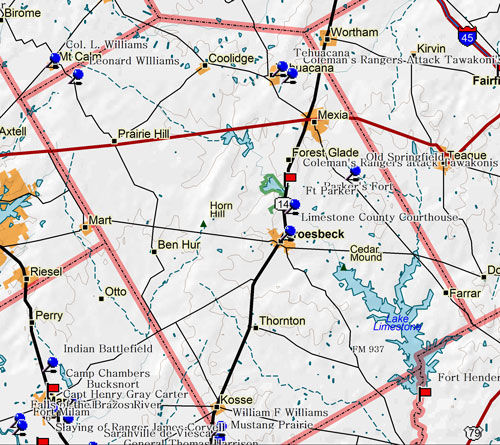 Marker Title: Limestone County Courthouse
Address: 200 W. State St.
City: Groesbeck
County: Limestone
Year Marker Erected: 1998
Marker Text: Limestone County was established in 1846. Springfield served as the first county seat, but geographic boundary changes and the burning of the Springfield Courthouse led to the designation of Groesbeck as the county seat in December 1873. Three more official courthouses served the county before the early 1920s. The county employed the midwest engineering company of Amarillo to draw up plans for a new structure in 1923. The William Rice Construction Company, also of Amarillo, received a contract for $300,000 to erect this structure. Rice had been the contractor for both the Lipscomb and Lynn County courthouses. A fine example of a classical revival building with beaux arts influences, the 1924 Limestone County Courthouse is a variation on the most common themes of early 20th century courthouses. Then-modern construction methods, such as reinforced concrete structural systems covered in brick and terra cotta, were employed. The elevations -- classical columns flanking the windows, upper floors adorned with balustrades and elaborate cornucopia moldings -- indicate that the edifice is intended to be viewed from all sides. The Limestone County Courthouse functions as the heart of Limestone County and it continues to be used for daily county governmental business. Recorded Texas Historic Landmark - 1998

Marker Title: Old Springfield
Address: SH 14, S of Mexia
City: Mexia
County: Limestone
Year Marker Erected: 1966
Marker Location: On SH 14, 500 ft south of Fort Parker State Park entrance on west side of road.
Marker Text: Named for the large spring on townsite donated Jan. 6, 1838, by Moses Herrin, who gave 4 lots to any person agreeing to settle in the town. 12 families later in 1838 were forced out by Indian hostility. Post office was established in 1846. When Limestone County was created April 11, 1846, Springfield-- its only town of any size-- became county seat. First courthouse was built 1848 near Navasota River; new 2-story brick courthouse in 1856 on the hill. Home of Springfield District of Methodist Church from which stemmed the Northwest Texas Conference. Also had active Baptist and Disciples of Christ churches. Springfield College was established, but closed during the Civil War. The Navasota Stock Raisers Association was organized here. When Houston & Texas Central Railroad was built some miles to the East in 1870, population dwindled. In 1873 there were 2 great fires in the town-- one burning the courthouse. Surviving buildings were moved away. Groesbeck became the county seat. The old cemetery and Springfield Lake, both in Fort Parker State Park, retain the historic name of the once important town. Lake Springfield provides recreation, irrigation and municipal water. 1966

Marker Title: Tehuacana
Address: Westminster Rd.
City: Tehuacana
County: Limestone
Year Marker Erected: 1967
Marker Location: On Campus of Westminster College, Westminster Rd., Tehuacana.
Marker Text: Located at one of highest points (altitude 661 ft.) between Dallas and Houston. First noted in history by Philip Nolan's trading expedition, 1797. Home in early days of Tehuacana Indians, a Wichita tribe, who engaged in farming and peaceful pursuits until they were destroyed in early 1830s by Cherokees. Town is on Mexican land grant obtained 1835 by John Boyd, member First Congress Republic of Texas. In 1847 Boyd became first postmaster, and in 1849 nominated Tehuacana for capital of State of Texas. However, Austin won in election held in 1850. Tehuacana Academy, a Presbyterian school locally organized and supported, operated ten years. It was organized and supported, operated ten years. It was closed during Civil War, but furnished incentive (with help of Boyd) for founding in 1869 of Trinity University. Boyd's gift of 1,520 acres of land for college use includes preset campus, where Trinity (now in San Antonio) operated until 1902. School plant was deeded to Methodist Protestant Church, which relocated here Westminster College, one of first junior colleges (1916) in Texas. The Congregational Methodist Church bought the property in 1953 and now operates Westminster College and Bible Institute on the historic campus.

In July of 1835, Coleman's Rangers attacked a force of over one hundred Tawakonis in Limestone County. Coleman later wrote, "We had a severe battle. One fourth of my men was killed and wounded. We took their encampment by charge and the battle ended." They arrived back at Parker's Fort on July 11th.