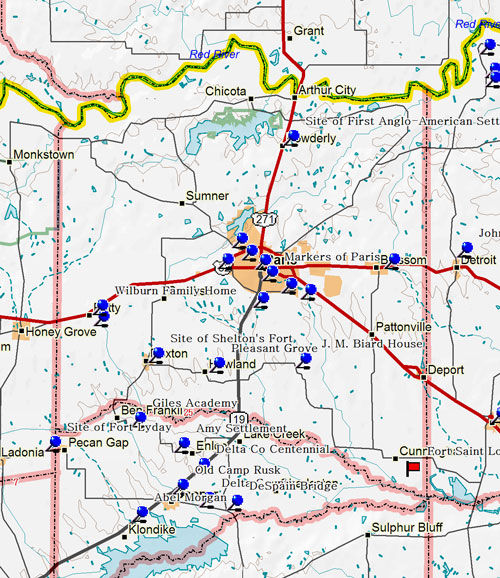 Marker Title: Site of First Anglo-American Settlement in Lamar County
City: Powderly
County: Lamar
Marker Text: Legend tells of French and Spanish forts before the families of J.W.G. Pierson, Luke and John Roberts, and the Mason brothers settled here in 1820. Within a year, in the absence of the men, women, children and slaves were victims of an Indian raid. Five of the men pursued, but outnumbered, they too were killed. Be silent, friend! Here heroes died To blaze a trail For other men.

Marker Title: James Henry Campbell Home
City: Blossom
County: Lamar
Year Marker Erected: 1983
Marker Text: Tennessee native James Henry Campbell (1830-1918) moved to Texas in 1856 with his wife, Julia Emeline (Perkins), and their children. One of the first settlers in this area, he named the surrounding community Sylvan for the nearby grove of trees. A Confederate veteran, Campbell completed this homby later roads.

Central National Road of the Republic of Texas

Marker Title: Central National Road of the Republic of Texas
City: Paris
County: Lamar
Year Marker Erected: 1968
Marker Location: US 82, west city limits of Paris in roadside park
Marker Text: Designed as a military highway, intended to make linkage with United States military road built to the north of the Red River in the 1820s. This was part of the national effort of Republic of Texas to open a good road system. Congress in 1839 passed a bill for a road east from Washington-on-the-Brazos to the Sabine River; 1841 legislation called for a road from the Nueces to the Red River and another from Austin to Santa Fe, New Mexico. The Central National Road was created in 1844, to reach from mouth of Elm Fork on the Trinity to Kiomatia Crossing on the Red. It went down a main street in Paris, which was founded in 1844; near its south end was the 1841 John Neely Bryan home around which the city of Dallas originated. Major George W. Stell surveyed the 130-mile route. Plans called for a road 30 feet wide and clear of tree stumps over 12 inches high. For each mile of road built (including bridges), grants of 160 acres of public lands were offered. Commissioners were Roland W. Box, Harrison County; James Bradshaw, Nacogdoches County; William M. Williams and Jason Wilson, Lamar County; John Yeary, Fannin County. The route is roughly followed by later roads.

Marker Title: Burial Site of John S. Chisum
City: Paris
County: Lamar
Year Marker Erected: 1967
Marker Location: Washington St. next to rail crossing, Paris
Marker Text: (1824-1884) Cattle baron whose herds, moving from east to west Texas and into New Mexico, expanded into one of the greatest cattle spreads in the west. Coming from Tennessee to Paris, 1837, Chisum joined S.K. Fowler in a cattle venture in Denton County, 1854. During the Civil War, he supplied beef to Confederate troops west of the Mississippi and his cowboys guarded the frontier against Indians. After moving in 1864 to the Concho River, then to "Bosque Grande" on the Pecos, he finally located his spread at South Spring near Roswell, New Mexico, 1873. His enormous herds-- 60,000 to 100,000 head-- pounded trails across Texas into New Mexico. His name and fame led to confusion with Jesse Chisholm, blazer of part of the historic Texas-to-Kansas cattle trail. Chisum's onetime partner, famous cattleman Charles Goodnight, said that Chisum, who could correctly tally three grades of moving cattle at once, was the best counter he knew. Chisum's distinctive "Long Rail" brand and "Jinglebob" ear-notch defied alteration. A disastrous packing house deal and involvement in the 1876 "Lincoln County War," in which Billy the Kid and various cattle factions figured, ultimately led to Chisum's financial ruin.

Marker Title: Lamar County, C.S.A.
City: Paris
County: Lamar
Year Marker Erected: 1965
Marker Location: Main and 1st St. on Houston at Courthouse
Marker Text: Of uneasy border of Indian Territory in the Civil War. A military transport center, on the Old Central National Road surveyed in 1844 by the Republic of Texas, to run from San Antonio, crossing Red River north of Paris. A rich farming area. Lamar County gave much food to the Confederacy, despite unrest over rumors of Federal invasion from the north. In 1861, Lamar County sent to the Texas Secession Convention the one delegation to vote unanimously against secession. Citizens in the statewide election also opposed secession by vote of 663 to 553. Once war came, however, the county raised at least 9 combat companies. Organized 9th Texas Infantry, led in succession by Colonels S.B. Maxey, W.H. Young and W.A. Stanley. The 9th fought at bloody Shiloh in 1862 and later was in famous Hood's Texas Brigade, one of the most illustrious armies in the Civil War. Maxey became one of the 3 major generals and Young one of the 32 brigadier generals given by the state of Texas to the Confederate cause. Among most noted of Texas contractors of beef to feed Confederate armies was a Lamar countian, John Chisum, who during wartime became a cattle king, with great herds in open country to the west.

Marker Title: The Historic Persimmon Grove and Capt. Hill's Military Camp
City: Petty
County: Lamar
Year Marker Erected: 1977
Marker Location: 6 mi. north of Petty via US 82 and FM 38
Marker Text: Up to 1860, pioneers found here a grand 100-square-mile prairie overgrown with high grass. The grove of persimmons 100 yards west of this spot formed an island on the north-central edge of the prairie. The locality's only trees, the persimmon grove was a gathering place where settlers swapped news or livestock and followed other casual pursuits. When Texas and other states seceded from the Union and prepared for war, Lamar Cavalry Company No. 2 was organized here on June 10, 1861, by Methodist lay minister and Mexican war veteran James Hill (1827-90). Capt. Hill drilled his men for several months on the prairie beside the grove. Then it became known that militia laws would forbid such cavalry units to leave the state of Texas. Disbanding, Hill's men formed Company E, 9th Regiment, Texas Infantry, and were mustered into Confederate service on Nov. 26, 1861. In Ector's Brigade, French's Division, army of Lieutenant General Polk, they fought at Shiloh, Murfreesboro, Chickamauga, and other actions. Farmers later plowed up the prairie and planted trees that obscured the persimmon grove. Yet is has become a landmark of pioneer days.

Marker Title: Site of Shelton's Fort
City: Roxton
County: Lamar
Year Marker Erected: 1978
Marker Location: CR 24050 off FM 2675, about 4 mi. SE of Roxton
Marker Text: In 1837 Jesse Shelton (1782-1855) built a log house and stockade at this site. It served as a way station for pioneer travelers and a stronghold for settlers fleeing Indian raids. Shelton's Fort was designated a Republic of Texas Post Office in 1840. It was also the site of Methodist worship services. Shelton served on the committee to select the first Lamar County Seat and was one of the county's first justices of the peace. In 1851 George McGlasson bought the property. The settlement that grew up in this vicinity became known as McGlasson community.

Marker Title: George Washington Stell, Sr.
City: Paris
County: Lamar
Year Marker Erected: 1980
Marker Location: Shady Grove Cemetery off FM 905, 9 mi. south of Paris
Marker Text: (1793 - Dec. 12, 1870) A veteran of the War of 1812, Virginia native George W. Stell, Sr. came to Texas in the late 1830s. A farmer, surveyor, and builder, he constructed the first courthouse in Paris after it was named the Lamar County Seat in 1844. Stell, who was deaf, also surveyed the route of the Central National Road for the Republic of Texas Congress. Stretching for 130 miles from the Trinity River to the Red River, it helped open the area for settlement.

Marker Title: Tridens Prairie
City: Paris
County: Lamar
Year Marker Erected: 1985
Marker Location: FM 38 / US 82, 8 mi. west of Paris
Marker Text: In 1841, when Zacharia Westfall was granted 1280 acres of land in this area, much of the northeastern region of Texas was covered with natural prairies. Over the years most of them have been plowed or destroyed. Tridens Prairie, which covers 97 acres of Westfall's original grant, is an undisturbed remnant of the blackland prairie that now is under preservation management. Tridens Prairie is part of a natural grassland that extends from Texas through the midwestern United States and into southern Canada. Its name is derived from the native, perennial bunch grass known as long-spiked tridens. Over 150 species of grasses and wildflowers have been identified in Tridens Prairie. Dominant grasses of the prairie include sporobolus silveanus (silveanus dropseed), tridens strictus (long-spiked tridens), paspalum floridanum (Florida paspalum), and tripsacum dactyloides (eastern gama). One of the few remaining native grasslands in the state and once part of a large hay-producing region, Tridens Prairie is an important part of Texas' natural history. It is being preserved by the Texas Nature Conservancy and Texas Garden Clubs, Inc.