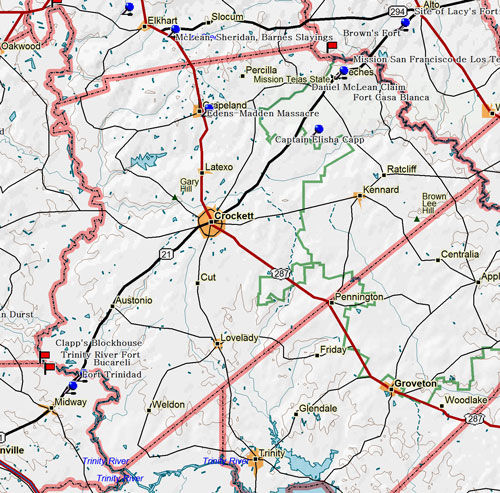 Marker Title: George G. Alford
Address: East Pease Street
City: Crockett
County: Houston
Year Marker Erected: 1981
Marker Location: Glenwood Cemetery
Marker Text: (June 17, 1793 -- April 1, 1847) New York native George G. Alford, an officer in the War of 1812, came to Texas from Missouri in 1836. During the Texas Revolution he served as Gen. Sam Houston's quartermaster general. Captured by Mexican forces after the was while on a supply trip for the Republic of Texas, he was released by Mexican forces through intervention by the U.S. President, Andrew Jackson. Alford later owned a Houston County plantation and served as justice of the peace and county judge.

Marker Title: Joseph T. Bowman
County: Houston
Year Marker Erected: 1990
Marker Location: Guiceland Cemetery; 5 miles north of Grapeland on US Hwy 287, then east on Anderson CR 174 .7 mile.
Marker Text: A native of Illinois, Joseph T. Bowman was the son of Jesse B. Bowman, who died at the Alamo. Arriving in Texas in 1835, Joseph T. Bowman enlisted in a company known as U.S. Provisionals in Nacogdoches. In December 1835 he signed the Goliad Declaration of Independence, which resolved that Texas should become an independent Mexican state. Following the Texas Revolution, he served in the Republic of Texas Army. He and his family settled in this area about 1845. Married to the former Naphania Hardin, Joseph Bowman was the father of ten children.

Marker Title: Elisha Clapp
City: Crockett
County: Houston
Year Marker Erected: 2000
Marker Location: 11 mi. W of Crockett on SH 21; .25 mi. N on CR 2917
Marker Text: The son of a veteran of the American Revolution, Elisha Clapp was born in Tennessee and came to Texas in 1822. He served in the army at San Jacinto in a cavalry company during the Texas revolution. He was in charge of a company of mounted rangers near his home on Mustang Prairie in 1836, and in 1837 was among the petitioners for the organization of Houston County. President Sam Houston nominated Clapp for a commission as captain and appointment to the command of the ranger company at Nacogdoches County in 1837. Clapp later returned to Houston County, where he helped to organize and became one of the first trustees of Trinity College in the Alabama community in 1841. Clapp and his family moved to Leon County by 1849. He died in 1851. (2000) 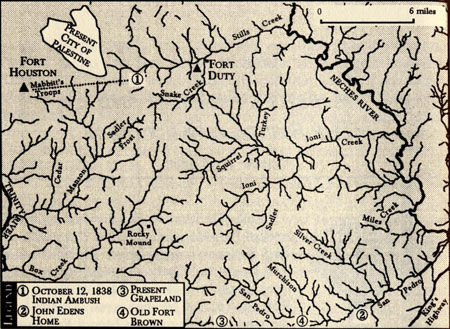 Marker Title: John Edens Cemetery
City: Grapeland vicinity
County: Houston
Year Marker Erected: 2000
Marker Location: 6 miles east of Grapeland on FM 2423, then 1.1 mile south on FM 2022 to CR 1655.
Marker Text: (3 miles east) Among the earliest burials in this family cemetery on John Edens' land are believed to be the victims of the Edens-Madden massacre, which occurred near here in October 1838. The victims included John Edens' second wife, whose name is unknown; his daughters Caledonia, 3, and Emily, 16; grandsons Robert and Seldon Madden, ages 7 and 4; Sarah (Hall) Murchison; Mary Madden, the 3-year-old daughter of Robert and Nancy Madden; and Mary Murchison Sadler. More than 30 people reportedly were buried here, including James Madden (d. 1843), first sheriff of Houston County. The four marked graves remaining at the dawn of the 21st century are those of John Edens (1783-1857); his grandson, Isaac R. Earl; and great-grandsons James Franklin and Henry Lee Earl. (2000) 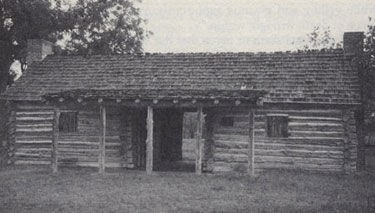 Marker Title: Edens-Madden Massacre
County: Houston
Year Marker Erected: 1971
Marker Location: on FM 227 10 miles east of Grapeland; Augusta.
Marker Text: A famous tragedy of the 1830s. While able-bodied men where away fighting Indians, six or seven women, some young children, and four elderly men -- most of them relatives -- were at the home of John Edens (2.4 mi. SW of here). Indians attacked, killing several women and setting fire to the house. The men, 4-year-old Balis Madden, and a little girl escaped. Two wounded women, Mrs. James Madden and Mrs. Robert Madden, managed to survive. The Indians may have carried off some of the missing; the fire burned several bodies. Patsy, or Betsy, an African woman, rescued some of the survivors. More

Marker Title: Five Courthouses of Houston County
Address: Courthouse Square
City: Crockett
County: Houston
Year Marker Erected: 1979
Marker Location: west side of Courthouse Square in Crockett
Marker Text: On June 12, 1837, President Sam Houston authorized the formation of Houston County, the first newly created county in the Republic of Texas. Andrew W. Gossett (1812-1890) donated land, which included this square, for the townsite. He and his father, Elijah, both veterans of the Battle of San Jacinto, named the county for Sam Houston, and the county seat for David Crockett, a former Tennessee friend. The first county courthouse, a log structure which served as a fortress during Indian attacks, was in use at this location by 1838. A brick building, which replaced the first courthouse in 1851, was destroyed by a fire of mysterious origin in 1865. County business was conducted in the L.E. Downes building on the southwest corner of the square until a two-story frame structure was finished in 1869. A jail addition burned in 1871 while it was under construction. The third courthouse and jail burned in 1882. The fourth courthouse, completed at this site in 1883, was razed in 1938. While this three-story structure was under construction, county business was conducted in the Crockett Hotel. In 1975 the third-floor jail was moved to a separate building and the fifth Houston County courthouse was remodeled. Incise in base: Eliza H. Bishop, Houston Co. Historical Commission Chairman, 1871-78.

Marker Title: Houston's Mound
County: Houston
Year Marker Erected: 1995
Marker Location: 20 miles north of Crockett on FM 2022
Marker Text: At 552 feet above sea level this oblong knoll rises to the highest elevation in the area. Known as Houston's Mound as early as the 1830s, it afforded Native Americans, pioneers, and soldiers a view of the surrounding terrain. William T. Sadler (1797-1884) acquired land here which included the mound in the 1820s. Sadler, San Jacinto battle veteran and a respected land surveyor, is credited with establishing the mound as a survey benchmark. Sadler and a number of other surveyors used the mound to verify boundaries between Houston County and counties to its north and east.

Marker Title: Madden Massacre
County: Houston
Year Marker Erected: 1936
Marker Location: 10 miles east of Grapeland
Marker Text: In a log cabin built here in 1832 by James Madden seven white women with their children were killed by Indians in 1833 while their husbands were held captives in the adjoining cabin. Known as the Madden Massacre.

Marker Title: Daniel McLean and John Sheridan
City: Augusta
County: Houston
Year Marker Erected: 1971
Marker Location: on FM 227 in Augusta
Marker Text: This area's earliest settlers; from North Carolina. McLean (1874 -- May 10, 1837) came to Texas in 1813 with Guttierez-Magee expedition, seeking to free Mexico from Spain. Returning when Austin opened Texas to Anglo-American colonization, he took up land in 1824 on San Pedro Creek (east of here); His brother-in-law John Sheridan (April 5, 1796 -- May 10, 1837) settled on Silver Creek (300 yds. north) Near site of present Slocum (12 miles northwest). They were both killed by Indians while pursuing stolen horses. Mrs. Sheridan, with help of a boy, brought back the bodies. Each man was buried on his own land.

Marker Title: Site of Daniel McLean Claim
County: Houston
Year Marker Erected: 1972
Marker Location: 1.5 west of Weches on SH 21
Marker Text: Daniel McLean (1784-1837) first came to Texas in 1813 with the Gutierrez-Magee expedition, and was one of 93 survivors of the fateful Battle of the Medina. Returning with his wife Hannah (Sheridan) in the original Austin colony, he settled this league in 1821 and became first permanent resident of area now in Houston County. McLean and his brother-in-law John Sheridan were killed by Indians May 10, 1837, near site of present town of Elkhardt, Texas. Daniel and Hannah McLean are buried near this marker. Because of their pioneering spirit, this has been Mclean land since 1821.

Marker Title: Mission San Francisco de los Tejas
County: Houston
Year Marker Erected: 1968
Marker Location: SH 21, entrance to Mission Tejas State Historical Park
Marker Text: First Spanish Mission in East Texas. Established in 1690 by Franciscan friars to convert the Tejas Indians. "Tejas", a Spanish rendition of the Indian word for "friend", was in time adopted as the state name. The founding party was led by Capt. Alonso de Leon, a veteran explorer making his fifth journey into Texas. He was to see if the Tejas desired a mission and to find any remaining threat of the Frenchman La Salle's expedition of 1685. Finding none, de Leon proceeded to this site. As the Tejas were willing to accept missionaries, he built a dwelling and church of rough-hewn logs near a brook. The church was dedicated on June 1, 1690. Leaving father Damian Massanet in charge, de Leon departed on July 4. Three years later, however, the mission was empty. Lack of sufficient defense, the isolated location, epidemics and the insincerity of the Indians (who took the Spaniard's gifts but not their religion) contributed to its failure. In 1693 it was abandoned, although later twice re-established and renamed. In spite of this, Spanish officials were inspired by the Tejas effort to make long-range plans for future expeditions, which marked the beginning of the Spanish mission and colonization movement in Texas.

Marker Title: San Pedro Community
City: San Pedro
County: Houston
Year Marker Erected: 1993
Marker Location: 11 miles north of Crockett on FM 2423, then 50 feet west on FM 2423 to cemetery.
Marker Text: In the 1830s immigrants from the southeastern U.S. settled here along San Pedro Creek and the stage route to nearby Rusk. A stage stop and general store established by Joel W. Stowe became site of the San Pedro post office in 1842. Settlers made molasses from native ribbon cane, grew cotton and corn, and milled lumber. The Presbyterian Church (1870s), cemetery (1872), San Pedro School (1888), and Baptist church (1904) were community centers. The population fell during World Wars I and II before rebounding in the 1960s. A new Baptist sanctuary was completed in 1979.

Marker Title: Stagecoach Inn
County: Houston
Marker Location: SH 21 4.5 miles east of Crockett
Marker Text: Built as a home by Joseph D. Rice, Sr., who came to Texas in 1828. In 1838 it was designated as a stopping place for the stage coach from Nacogdoches to Crockett.

Possibly the earliest settlement fort in Texas, built around 1833 in northeastern Houston County by Reuben Brown. 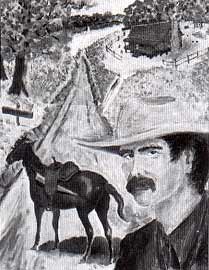 "You will range from any point on the Brazos to Mr. Hall's Trading House on the Trinity. For your orders, I refer you to copies of those given to Captain Michael Costley of the N. W. Frontier, therewith enclosed for your information. The general principles of them you will find applicable to your command as well as to all officers employed on the frontier. You will detail eight men from your command for the service and place at the disposition of Dan Parker Esq., as the local situation of the frontier may require."