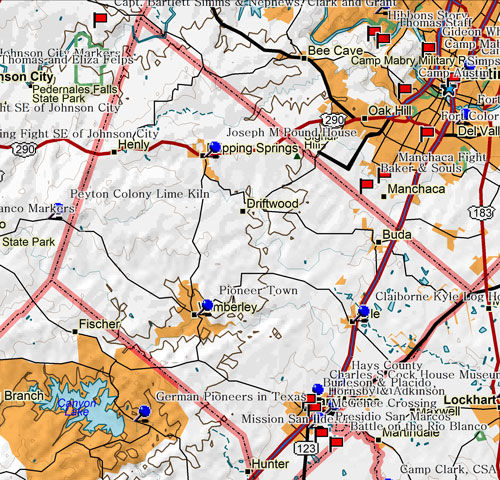 Marker Title: The Courthouses of Hays County
City: San Marcos
County: Hays
Year Marker Erected: 1974
Marker Location: West side of Courthouse Square
Marker Text: When Hays County originated in 1848, its one public building was a log church-schoolhouse that had to serve as the courthouse, along with its other uses. Although the San Marcos townsite, platted in 1851, contained a court square donated to the county, the forfeiture of a $2,000.00 criminal bond later gave the county funds for building, and in 1861 officials employed contractor C. F. Millett to erect on the Square a 36 x 40-foot, 2-story frame courthouse with a hearing room, jury rooms, and 4 offices. That pine building burned in 1868, and county officials operated from rented quarters until a courthouse of soft, locally quarried limestone was completed in 1871. Damaged by earth shiftings, that 2-story, 45 x 53-foot building was razed (1881) and replaced by a 50 x 60-foot, 2-story building of harder limestone designed by F. E. Ruffini, architect for University of Texas buildings and for courthouses in several other counties. After that 1882-83 structure lost its top story in a fire on Feb. 28, 1908, it also was razed. The fourth and present courthouse, in eclectic style, was designed by C. H. Page & Brother, of Austin. Completed and accepted by the county court on Dec. 13, 1909, it has had interior alterations; it was restored in 1972.

Marker Title: McGehee Crossing
City: San Marcos
County: Hays
Year Marker Erected: 1987
Marker Location: From the Blanco River Crossing on SH 80 (San Marcos) go south on SH 80 approx. 1 mile to ROW.
Marker Text: The Camino Real, also known as the Old San Antonio Road and the King's Highway, followed a route from Nacogdoches to the Rio Grande. Louis Juchereau de St. Denis (1676-1744) traveled the route to establish trade between the French in Louisiana and the Spanish of Coahuila Province on the Rio Grande in 1714. The first settlement at the San Marcos River crossing of the road was Villa San Marcos de Neve, established by the Spanish in 1808. It was abandoned by 1812 due to the brewing Mexican revolution. During their colonization efforts in 1820 and 1821, Moses Austin (1761-1821) and his son, Stephen F. Austin (1793-1836), very likely crossed the San Marcos River near this point. Thomas Gilmer McGehee (1810-1890) settled on the east side of the river on a Mexican land grant about 1846. In 1859 his nephew, Charles L. McGehee, Jr. (1837-1929), acquired 1200 acres of land bordered by the Camino Real and the river. Ten years later he sold the land to his cousin, George T. McGehee (1836-1926). Due to the McGehee family's association with this historic site, it became known as McGehee Crossing.

Marker Title: Charles Lewis McGehee Cabin
City: San Marcos
County: Hays
Year Marker Erected: 1985
Marker Location: From San Marcos (I-35) take RR 621 SE approx. 2.6 miles to Old Bastrop Rd. (CR 266); then NE on CR 266 approx. 1.5 miles to entrance to Rancho del Camino Real (on private property).
Marker Text: The McGehee family came to Texas from Alabama in 1847. In 1859, Charles Lewis McGehee, Jr. (1837-1929) acquired this property along the San Marcos River. He soon built this cabin for his wife, Sarah Jane (Humphreys), and their children. One of the oldest existing structures in this part of Hays County. The cabin features a fireplace and chimney of hand-hewn stone. About 1870, McGehee moved his family from the farm into the town of San Marcos, where he worked as a land developer and stock dealer.

Marker Title: William W. Moon
City: San Marcos
County: Hays
Year Marker Erected: 1975
Marker Location: Corner of C. M. Allen Pkwy. and Hutchison.
Marker Text: (March 25, 1814 - Jan. 7, 1897) Orphaned two days after his birth, William W. Moon grew up with two uncles in his native Alabama. He married Sophronia Elizabeth Sublett (1819-46) in 1834 and moved to Bastrop, Texas in 1838. Moon joined the Texas Rangers and first visited San Marcos Springs during a running Indian battle in 1843. Enchanted by the countryside, he brought his family here in 1845 and built a cabin at this site. The Moons were the first permanent Anglo-American settlers in what is now Hays County. Sophronia Moon died April 21, 1846, but her husband and four daughters were soon joined by other pioneers who decided to make their homes here. William W. Moon made many contributions to the growing settlement. His cabin was the site of the first sermon preached and the first school held in Hays County. In 1846 he helped build the log church-schoolhouse which became a courthouse when Hays County was organized (1848). Moon and his family were charter members of the Presbyterian church formed in 1853. In addition to ranching, Moon operated a hotel and stage stop, blacksmith shop, and freight line. He was elected county sheriff and served, 1846-47, in the Mexican War, and 1862-63, in the Civil War. He died in 1897 and is buried in Wimberley Cemetery.

Marker Title: Post San Marcos
City: San Marcos
County: Hays
Year Marker Erected: 1973
Marker Location: Inside Aquarena Springs Park (SWTSU), behind the Visitor Center.
Marker Text: The Republic of Texas Congress in Dec. 1838 called for military roads and forts from Red River to the Nueces. A road from Austin, joining El Camino Real near St. Mark's Springs, was designed for rapid communication between San Antonio and the Capital. Post San Marcos was to be constructed at the springs to safeguard travel. Adj. Gen. Hugh McLeod (1814-62) laid out the fort, to be garrisoned by a company of 56 men. Capt. Joseph Wiehl's Co. H, 1st Inf. Regt., in Oct. 1840 completed the road and the fort. In 1841 the Republic of Texas army disbanded for lack of funding, and the post was closed.

Marker Title: San Marcos Springs
Address: Aquarena Springs Park
City: San Marcos
County: Hays
Year Marker Erected: 1971
Marker Text: Pouring forth millions of gallons of clear, icy water daily, these springs feed the San Marcos River and the 1,380-square-mile area which it drains. The immense springs rise at the Balcones Escarpment, a geologic fault line which slices across the state, separating upland from lowland Texas. The abundance of fresh water made these springs a mecca for the Indians who inhabited Central Texas and later for the European explorers and settlers who followed. The name San Marcos was first given to a Texas River by the Alonso de Leon Expedition on April 26, 1689 (Saint Mark's Day). The name was not applied to the present river, however, until 1709. Other explorers inspected this area and in 1755 it became a temporary site for several Spanish missions. Almost a century later, in 1845, pioneers William W. Moon and Mike Sessom made a permanent settlement here. In 1851 Gen. Edward Burleson, William Lindsey, and Eli T. Merriman bought the adjacent land and on it laid out the town of San Marcos. Attracted by the scenic beauty of the area, A. B. Rogers started a park here in 1926. Over the years it has been developed into "Aquarena Springs," one of Central Texas' most popular tourist attractions.

Marker Title: Wonder Cave
City: San Marcos
County: Hays
Year Marker Erected: 1972
Marker Location: Corner of Prospect (1200 block) and Allen
Marker Text: In Balcones Fault, created by prehistoric earth shift. Said to have been campsite of Indians and Spaniards, especially priests who planted Anaqua trees in area. By legend, robber gangs in 1820s cached Camino Real booty here. Discovered 1893 for Anglo-Texas by Mark A. and Elizabeth Burleson Bevers, after water well drill fell 158 feet at their home here. This became first commercially opened cave in state about 1900 when W. S. Davis gave guided tours by candlelight; bought in 1916 for $50 and a gray horse by A. B. Rogers, who spent his lifetime in discovery and development.

Battle on the Rio Blanco

Castleman gathered his family and hurried to Gonzales where volunteers were raised for pursuit. Just outside of San Marcos on bluff of Blanco River, April 18th, 1835, Captain Bartlett D. McClure's posse of about thirty men found the murderers. The posse split into two parties, one circling around while the other attacked. John Castleman was among those who killed a few warriors during the advance. Andrew Sowell Sr. was part of the group of volunteers waiting behind the Indians in ambush. His nephew, A. J. Sowell, later wrote: 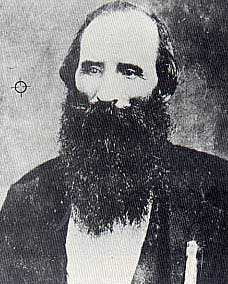 Several shots were fired, and a third Indian had his bow stick shot in two while in the act of discharging an arrow. Andrew Sowell attempted to fire with a flintlock rifle, but it flashed in the pan. He had stopped up the touch-hole to keep the powder dry in the fog, and had forgotten to take it out. The other Indians now ran back towards the river, yelling loudly. By this time most of the men had gotten clear of the brush and charged with McClure across the open ground.

...Captain McClure's volunteer forces pursued the Indians to the Blanco River, where the fighting became more general. More of the fifty-odd Comanches were killed as they tried to cross the water with their stolen goods. Andrew Sowell shot and killed on Indian as he tried in vain to climb a steep bank on the far side. In the end, they left much of their spoils behind and moved swiftly from the area. The whites chose not to cross the river and continue their pursuit. They were fortunate to have not had any man killed or any serious injuries sustained.

Presidio San Marcos de Neve was founded in the early nineteenth century four miles below present-day San Marcos, where the Old San Antonio Road crossed the San Marcos River. A flood in June of 1808 nearly wiped out the community. The colony held on for several years, but harassment by Comanche and Tonkawa Indians forced settlers to abandon it in 1812. Archeologists recently have discovered ruins, which are probably of the presidio and community. The location of these ruins is still being kept a secret.

Indians Kill a Mr. Moore and Raid in Hays County

During May of 1872, the Indians killed a Mr. Moore, about one-fourth mile from his home, on the head of Barton's Creek, in Hays County. It was in the morning, and he was searching for his horses. He was scalped.

The next day it has been supposed these same Indians ran D.W. Wonsley out of the cedar brakes about fifteen miles further west, and succeeded in capturing his horse.