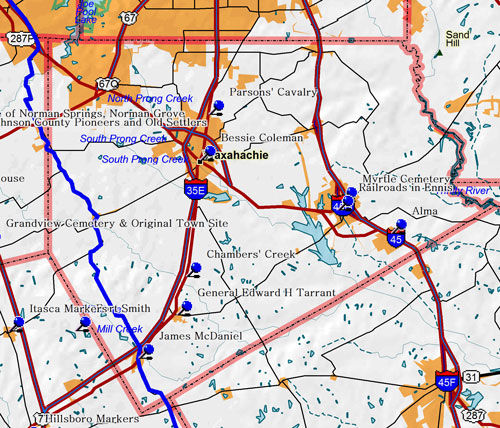 Marker Title: Alma
Address: FM 1183 at Inter Urban Rd.
City: Alma
County: Ellis
Year Marker Erected: 1990
Marker Location: FM 1183 at Inter Urban Rd. and Railroad tracks, Just W. of IH 45, Alma Marker Text: Settlement of this area began as early as 1848. The town of Alma was established in 1871, when the Houston and Texas Central Railroad was built through Ellis County. C.C. Hemming deeded part of his property for the railroad right-of-way and a town to be named in honor of his daughter, Alma. Soon the town included numerous homes, businesses, churches, and civic organizations. It was the center of a farming community until the 1950s, when Interstate Highway 45 was built through the middle of town.

Marker Title: Chambers' Creek
Address: Road side picnic area on US 77
City: Forredton
County: Ellis
Year Marker Erected: 1936
Marker Location: From Forreston take US 77 S about 1 mile to picnic area on W. side of rd., marker in picnic area.
Marker Text: Named in honor of Thomas Jefferson Chambers (1802-1865) to whom the first land grant within present Ellis County was made in 1834 by the Mexican government also known as Howe's Settlement in honor of William R. Howe, first settler in the region in 1843. An early post office in Robertson County first county seat of Navarro county, 1846-1848.

Marker Title: Bessie Coleman
City: Waxahachie
County: Ellis
Year Marker Erected: 2001
Marker Location: E. Main and Clift Sts., Waxahachie
Marker Text: (1892-1926) Born in Atlanta, Texas, pioneer aviatrix Bessie Coleman grew up and went to school in a Waxahachie neighborhood a few blocks north of this site. At age 23 she moved to Chicago and first expressed her desire to fly. Since there were no flight schools in this country that would teach African American women, Coleman learned to fly in France and obtained her international pilot's license in 1921. Upon her return to the United States, she was hailed as the first black woman pilot. Extremely popular, "Queen Bess", as she was known, performed as a barnstormer for integrated audiences at air shows and exhibitions around the country before her death in an air accident in Jacksonville, Florida. (2001)

Marker Title: Myrtle Cemetery
Address: W. Knox St.
City: Ennis
County: Ellis
Year Marker Erected: 1980
Marker Location: At the end of W. Knox St., Ennis
Marker Text: W.H. Parsons deeded the original ten acres at this site in 1875 for use as a cemetery. The burial ground was named "Myrtle" for a child whose single grave was included in the tract of land. Also buried here is Frederick H. Ranklin (1795-1874), a member of Stephen F. Austin's "Old 300" colony and veteran of the Texas Revolution. Other graves include those of author Katie Daffan (1874-1951), and Marine Lieutenant Jack Lummus (1915-1945), who was killed at the battle of Iwo Jima during World War II and later awarded the Congressional Medal of Honor

Marker Title: Railroads in Ennis
Address: NW Main & US 287
City: Ennis
County: Ellis
Year Marker Erected: 2000
Marker Location: Pierce Park
Marker Text: The Houston and Texas Central Railroad built tracks through Corsicana en route to Dallas in 1871. In 1872 the town of Ennis was platted along this line on 647 acres selected by Captain W.G. Veale. The town was named for railroad official Colonel Cornelius Ennis. The Houston and Texas Central (H&TC) began an extension from nearby Garrett to the town of Paris in 1882. Railroad magnate Hetty Green purchased the line in 1892. The line was extended to Ennis in 1894, and the railroad was named the Texas Midland Railroad. As a result of high community involvement, Ennis became a division point. The H&TC established a roundhouse, machine shops and its northern division headquarters here with the agreement that the shops would never be moved while Ennis could supply water for them. Two lakes were built for this purpose in 1891 and 1895. The Southern Traction Company was chartered on March 12, 1912, and operated an interurban line from Dallas to Corsicana via Ennis beginning October 20, 1913. The interurban line in Ennis ran along McKinney Street, turned onto Baylor Street, continued east one block and then proceeded south on Dallas Street. In Dallas, the interurban connected to Southern Traction's line to Waco. Southern Traction merged with Texas Traction in 1917. The interurban railway was abandoned in February 1941. The rail line to Paris was abandoned between Ennis and Kaufman in 1942, and all Texas Midland lines were closed by 1975. At the dawn of the 21st century, the Houston and Texas Central Railroad line that established Ennis was owned and operated by the Union Pacific Railroad. (2000)

Marker Title: General Edward H. Tarrant
Address: SH 34 and Couch St.
City: Italy
County: Ellis
Year Marker Erected: 1936
Marker Location: Intersection of SH 34 and Couch St., in traffic circle, Italy
Marker Text: Veteran of the War of 1812, member of the Texas Congress and a courageous indian fighter. Born in North Carolina, 1796, died in Parker County, Texas, August 2, 1858. Reburied in Ellis County near his former plantation, 1859. His remains removed to the county named in his honor in 1928 and reinterred in Fort Worth.