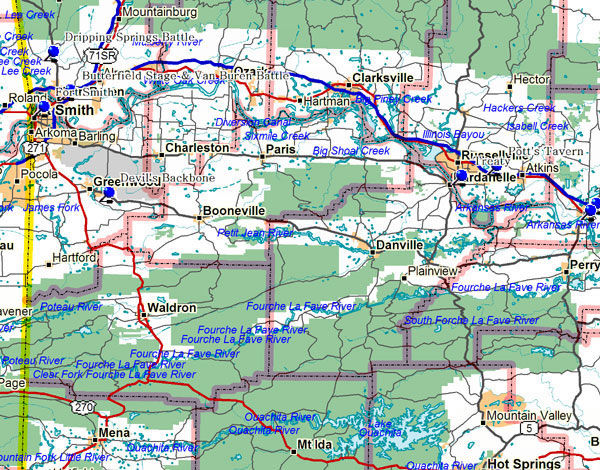 This battlefield in Sebastian County near Jenny Lind is the location of a battle between Confederate Infantry and a larger, mixed Federal force. On September 1, 1863 a Union force under Col. William E. Cloud attacked Confederate troops at Backbone Mountain. The battle began with an ambush by Confederate forces in an effort to allow their supply train time to reach safety. After three hours Confederate General William L. Cabell withdrew his command to Waldron. The Confederates had the better of the fight until Union forces could organize and bring up their artillery and cavalry. The Confederates tactical objectives had been accomplished, but the losses in men and morale could not be replaced. Losses were 14 Federals and 17 Confederates killed and wounded.

The Battle of Dripping Springs, Arkansas (December 28, 1862) was a preliminary of the Battle of Van Buren fought later the same day. Pushing south out of the Boston Mountains, a Federal force of 8,000 men and 30 pieces of artillery were advancing south when they ran into a Confederate picket in northern Crawford County. Learning that a regiment of Confederate cavalry (Crump's 1st Texas Partisan Rangers) were camped at Dripping Springs, Union Generals Blunt and Herron advanced on them with 3,000 cavalrymen When the Federals reached Dripping Springs, they found the Confederates camped on the northern slope of a substantial ridge. Forming into a line of battle, they advanced across fields and open ground and engaged the Confederate line of battle in a short firefight.

Charging down from Log Town Hill overlooking the town, the Federal cavalry (2nd and 6th Kansas and 3rd Wisconsin) chased the retreating Confederates down the main street. The attack came so quickly that it caught the residents of Van Buren by surprise. Union soldiers described seeing the citizens standing by the sides of the street in amazement. School children in Van Buren still reenact this part of the battle every year.

The charging Federals (and retreating Confederates) dashed past the front of the Crawford County Courthouse on their way to the river. Markers and monuments on the grounds help interpret Civil War activity in the area. The courthouse grounds also provide a home for the preserved log one-room school where Confederate General Albert Pike once taught class.

The retreating Confederates escaped by ferry boat, but came under artillery fire from the pursuing Federals. The Confederates on the other shore soon brought up a battery and began shelling the town. At least one civilian was injured and numerous buildings were damaged.

Once the Confederates opened fire from across the river, the Federals responded with guns of their own from the heights behind the town. Fairview Cemetery is the traditional spot where the Union artillery was placed.

The Butterfield Stage route between St. Louis and San Francisco passed through the main street of Van Buren, Arkansas and crosses the river at this point.

Seized by Confederate troops in 1861 and not recaptured until 1863. Fort Smith was an important objective for both sides and was an important opening into the Indian territory. The historic site is open to visitors. The National Cemetery contains both Union and Confederate graves, including three Confederate Generals. Recently added to the Civil War Discovery Trail.

Upon this spot under the Council Oaks, acting Governor Robert Crittenden and the Chief Black Fox, tribe spokesman, met in council April 1820 and made the Treaty which gave to Arkansas all the Cherokee land south of the Arkansas River.