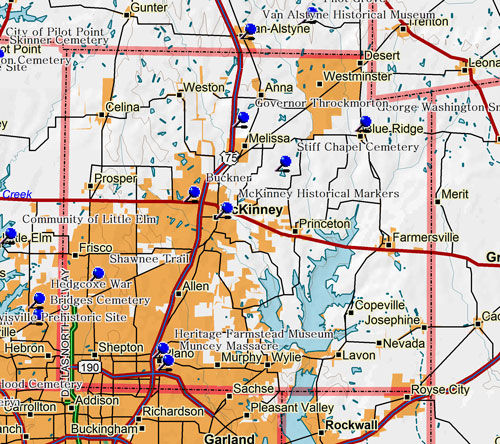 Marker Title: Buckner
City: McKinney
County: Collin
Year Marker Erected: 1978
Marker Location: on N. side of U.S. 380, about 3 mi W. of McKinney
Marker Text: John (Jack) and Polly McGarrah and family came to this site from Tennessee in 1842. The third settler in present Collin County, McGarrah opened a trading post to barter for hides and furs. While in the act of building a family fort, he and his men had to defend themselves from roaming hostile Indians. The Texas Legislature created Collin County on April 3, 1846, directing that its county seat, to be named "Buckner", would be no more than three miles from the geographic center. Buckner townsite was soon laid off here in McGarrah's settlement. On the Fourth of July, citizens met here and elected their first county officials. They also raised a military company for the Mexican War. On Sept. 21 there was an auction of Buckner town lots; on Nov. 25, 1846, the post office opened, with McGarrah as postmaster. By 1848 it was noticed that Buckner townsite was outside the legal limits for the county seat. The Legislature ordered another election and named the new county sear "McKinney", honoring early settler Collin McKinney, a signer of the Texas Declaration of Independence. Residents moved their homes and other buildings to McKinney (3 Mi.E), and Buckner townsite reverted to agricultural land uses.(1978)

Marker Title: Buckner Cemetery
City: McKinney
County: Collin
Year Marker Erected: 1988
Marker Location: On N. side of US 380 about 3 miles W of McKinney.
Marker Text: The land surrounding this historic cemetery was part of a grant obtained by John McGarrah, a member of the Peters Colony who arrived in this area in 1843. McGarrah founded a trading post near this site, and soon the Fort Buckner settlement was established. It would later become the first county seat of Collin County. David William O'Brien (1808-1885) came to Collin County with his family in 1857. He eventually acquired the part of the McGarrah land which included this site. The Buckner Cemetery, which was established on the O'Brien land, has also been referred to as O'Brien Cemetery over the years. Although there may be earlier unmarked graves, the oldest documented burial is that of Franklin O'Brien (1851-1870). Many early pioneers of Collin County are interred here, including victims of a smallpox epidemic in the 1870s. According to local tradition, a Kiowa Indian named Spotted Tail also lies here in an unmarked grave. The only physical remnant of the Buckner community, this cemetery serves as a reminder of the early history of Collin County. (1988)

Marker Title: 1927 Collin County Courthouse
Address: City Square
City: McKinney
County: Collin
Year Marker Erected: 1998
Marker Text: Collin County was formed in 1846 and its only town, Buckner, was automatically selected as the county seat. To comply with state law, an election was held to relocate the county seat to the center of the county. Only eleven people participated due to inclement weather, and when the vote was tallied McKinney was established as the county seat in 1848. The first courthouses in McKinney were modest wooden structures. A third courthouse was erected on this site during 1874-1875, and was opened for use in 1876. The 2-story Victorian structure was made of native limestone blocks with a steep mansard roof and a main entrance that faced east. The building's architect, often mistakenly identified as Charles Wheeler, was Charles Wheelock of Sherman. The much-celebrated courthouse on the square became a backdrop for parades and other events. The structure was overcrowded and in poor condition by the mid-1920s. Extensive exterior and interior renovations included the removal of the mansard roof and tower caps, as well as the addition of a third story and basement. Overseen by W.A. Peters of the Paris, Texas, architectural firm of Sparger and Peters, the work resulted in a classical revival edifice completed in 1927. Original features included tripartite windows with flanking double classical columns on the north and south facades. The new structure was commonly known as the "Temple of Justice," and continued to be the center of activity for city and county functions. It remained in service as a courthouse until 1979. The structure remains a fine example of 20th century classical revival design and a monument to Collin County history. Recorded Texas Historic Landmark - 1998

Marker Title: Old Collin County Courthouse
City: McKinney
County: Collin
Year Marker Erected: 1982
Marker Location: on Courthouse grounds, 100 Blk of N. Tennessee Ave, between Virginia and Louisiana Sts., McKinney.
Marker Text: Collin County was created from Fannin County in 1846. It was named for pioneer area settler Collin McKinney (1766-1861), a signer of the Texas Declaration of Independence. The first county seat was established at Buckner (2 mi. NW). In 1848 William and Margaret Davis conveyed 120 acres of land at this site for a more central seat of government, which became the community of McKinney. The first two courthouse in the new town were built of wood. In 1874 county commissioners approved plans for a more substantial courthouse on this site. Sherman architect Charles Wheeler designed the building and O.J. King served as general contractor. Constructed of stone from a local quarry (3.5 mi.ne), it was completed in 1876. A grand ball was held in the courthouse to celebrate the event. By the 1920s the courthouse was inadequate to meet the needs of a growing county. Extensive changes, including the addition of a basement and a third floor, were made in 1926-27 under the direction of architect W.A. Peters of Paris, Texas. The site of many political speeches and events, the building was used as a courthouse until 1979. It now serves as a historic reminder of the county's early development. (1982)

Marker Title: Site of Elm Saloon
City: McKinney
County: Collin
Year Marker Erected: 1995
Marker Location: 346 E. Virginia St. McKinney
Marker Text: The Elm Saloon opened about 1883 in a 2-story frame building at this site owned by T.O. Bower. According to an 1884 newspaper story gunfighter Frank James was arrested for his involvement in a fight in the Elm Saloon. By 1892 the saloon, named for a large elm tree near its entrance, was housed in a one-story stone structure. The saloon was located next to McKinney's only railroad passenger depot and by the early 1900s had become a local landmark known variously as the Elm Saloon, Rock Front Saloon, and Old Rock Saloon. The saloon was closed in 1902. Sesquicentennial of Texas Statehood 1845-1995

Marker Title: Muncey Massacre
Address: 2800 Spring Creek Pkwy.
City: Plano
County: Collin
Year Marker Erected: 1976
Marker Location: 2800 Spring Creek Pkwy., on Collin County Community College Spring Creek campus, Plano.
Marker Text: McBain Jameson and Jeremiah Muncey settled in this vicinity in 1840 and 1842. While hunting in late 1844, William Rice and Leonard Searcy came to Muncey's hut and found the savagely slain bodies of Jameson, Muncey, Mrs. Muncey, and a small child, and recognized signs of an Indian raid. The men sped out to their own sons, who were hunting nearby. Young Searcy was found safe, but Rice had been killed. Two Muncey boys disappeared, never to be found. Another was at Throckmorton settlement. That was the last tragic Indian raid in Collin county. (1976) Supplemental plaque added 1998: Historical marker relocated to this site in 1998. The site of the Muncey home and graves of the victims are approximately one mile northwest of this site.

Marker Title: Shawnee Trail
City: Frisco
County: Collin
Marker Location: on Preston Road (SH 289) between Prestmont Road and Hacienda Trail in Frisco.
Marker Text: In 1838 the Republic of Texas Congress appropriated money for construction of a north-south road opening the Northern Texas area to trade. The project leader, Colonel William G. Cooke, followed an existing Indian Trail which reached from the Red River to Austin. A supply fort established on the river near the trading post of Holland coffee was named for Captain William G. Preston, a veteran of the Texas Revolution, who was in charge of troops stationed there in 1840. The part of the road running south from the Red River to the Trinity River crossing in 1841 John Neely Bryan began the settlement of Dallas. By the 1850s the road was known as the Shawnee Trail and was used by immigrants coming to Texas. It also served as a cattle trail, leading to northern markets. The number of cattle drives decreased as new trails were opened to serve the growing Texas cattle industry. Further decline occurred when rail lines were completed to the area in the 1870s. Lebanon served as an assembly point for cattle drives on the Shawnee Trail. Bypassed by the Frisco Railroad in 1902, the town declined. The post office, opened in 1860, closed in 1905. (1980)

Marker Title: George Washington Smith
City: Blue Ridge
County: Collin
Marker Location: Blue Ridge Cemetery at the intersection of 1378 and FM 981 in Blue Ridge.
Marker Text: (1796?-1876?) Born in Wilson county, Tennessee, George Washington Smith came to Texas in 1834 with his wife Elizabeth Briggs. He fought in the Texas War for Independence (1835-36) as a private in Capt. Clendennin's Company, 1st regiment artillery. In the Mexican War (1846-48), he served as a sergeant in company, K, 1st regiment of the Texas Rangers, under Col. John Coffee (Jack) Hays. The Smith family settled in Collin county in 1852. When Smith died about 1876, he was buried near the entrance of the present Blue Ridge Cemetery. Later his grave was moved to the grounds cemetery (1.25 miles northwest). (1979)

Marker Title: Stiff Chapel Cemetery
City: McKinney
County: Collin
Marker Location: from McKinney, take FM 2933 north about 7 miles to CR 412, go east on CR 412 about 1.3 miles to marker on south side of road.
Marker Text: Jesse Stiff (1796-1871) came to Texas from Virginia in 1835 and settled on several thousand acres of land in this area. His brother, Louis, arrived in 1849, and a community known as Stiff Chapel developed around their homesteads. In 1847, Jesse's son, James, died while serving as a Texas Ranger. He was buried near his father's house on land that later was deeded as the Stiff Chapel Cemetery. Most of the graves in the two-acre family burial ground date from the 1800s. The last burial in the Stiff Chapel Cemetery, that of Minnie Swaim, took place in 1935. (1984)

Marker Title: Governor James Webb Throckmorton (February 1, 1825-April 21, 1894)
City: McKinney
County: Collin
Marker Location: take US 75 about 7.7 miles north of McKinney to Throckmorton exit, marker is on access road on east side of US 75.
Marker Text: A doctor's son, James W. Throckmorton was born in Tennessee. He migrated with his parents to the Texas frontier in 1841 and settled near this site. At age 17, he became hunter and scout for his pioneer neighbors. He served in the Mexican War (1846-48). In 1848 he married Annie Rattan (1828-1895) and built a home near McKinney. Trained as a physician, Throckmorton disliked medicine and in 1851 entered law and politics. He served 1851-57 in the Texas Legislature, where he promoted railroad building. Later he became attorney for Texas and Pacific Railroad. He was state senator, 1857-61 and 1863-65. Although he upheld the right of secession, he was one of seven men who voted against Texas leaving the union at the Feb. 1861 Secession Convention. During the Civil War (1861-65), he fought in the Confederate Army. Elected governor in the summer of 1866, he grappled with postwar problems of frontier defense and federal military occupation. In July 1867 Gen. Philip H. Sheridan, commander of the 5th military district to which Texas was assigned, removed Throckmorton from office as "an impediment to Reconstruction" and named E.M. Pease provisional governor. Throckmorton continued his political career in the U.S. Congress, serving his North Texas district in 1875-79 and 1883-87. (1977)