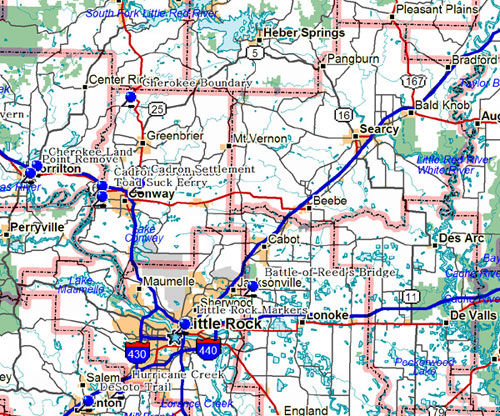 The blockhouse is a replica of a structure that was built on this site in the late 18th century. The building was a multiple structure but constructed originally for defense. It was used as a trading post, as a residence and as a public gathering place. When the French trappers and other early settlers were in this are, the Osage Indians occupied the land north of the Arkansas River. When the Osage were on the warpath, the settlers used the blockhouse as a place of refuge. The blockhouse was referred to in some of the French and Spanish journals and other early records. In the early 1800s the Job McElmurry family owned the property and occupied the blockhouse as a residence. The reconstruction was a joint venture of the Conway Chamber of Commerce and the Faulkner County Historical Society in cooperation with the U.S. Engineers. The 1830 Daniel Greathouse home, a two-room house built of massive cypress logs, is now a museum. Faulkner County, Old Cadron Settlement (From Conway take Highway 64 West toward Menifee (about 5 miles). Turn left onto Hwy. 319 (only way to turn) just before the bridge that goes over Cadron Creek. Take Hwy 319 all the way (about 2 miles). When you can't go any further (dead ends @ the gravel company) take a right into Cadron Settlement Park.)

On July 8, 1817 a treaty between the US Government and the Cherokee Indians was made by which the Cherokees ceded a part of their land east of the Mississippi river to the US in exchange for an equal amount of land between the Arkansas and White Rivers. This tract of land included that portion north of the Arkansas River beginning at the mouth of Point Remove Creek on the Arkansas River near Morrilton and extending a distance of 71 miles in a northeasterly direction to the Chatongua Mountain which is the first hill above Shields Ferry on White River near Batesville, then in a westerly direction far enough to embrace the required area to equal their exchanged lands, the line crosses this highway intersection and continues easterly along the left side of Hwy 124 approx. 7/8 mile. Another treaty in 1828 removed the Cherokees to Indian Territory in Oklahoma. Faulkner County, Junction Hwy 124 and 285

After the fall of Little Rock to Union forces in September 1863, the area immediately south of the Arkansas River became a No Man's Land. On the morning of October 23, 1864 a detachment of the 7th Army Corps, returning to Little Rock after raiding the Confederate Arsenal at Princeton, was engaged by Logan's 11th Arkansas Cavalry, CSA, at a point one mile southeast of this spot. The ensuing battle was fought at the Hurricane Creek Crossing of the Old Camden Road and resulted in 28 men killed, 11 wounded and one captured. Saline County

Land of the Cherokee

You are standing on land which was the homeland of the Cherokee Nation Wet. On July 8, 1817 a treaty was concluded between the members of the southern, or lower, Cherokee Nation in the present Georgia-Tennessee-North Carolina area. By this treaty the Indians agreed to exchange their land for acreage of land of equal size in the Territory of Arkansas. The Government agreed to give to the Cherokee lands lying between the Arkansas and White Rivers. The Eastern boundary line would begin at the south of Point Remove Creek. It ran northwest to the first hill above Shield's Ferry on white River near Batesville, then westward along the river bank. Chief "Major" John Ridge persuaded them to move to Arkansas. Chief "Dutch" Talchee carried the request to remove them to Oklahoma. Conway County, Cherokee Park southwest of Morrilton

Boundary Line was one and one-half miles south of Church and Cherokee Streets in Morrilton. Point Remove Creek empties into the Arkansas River. This site was the lower terminal of the Eastern Boundary of the Cherokee Nation West, established by the 1817 Treaty of Turkey Town, Alabama. In 1828 the Western Cherokees exchanged their Arkansas holdings for new lands in Oklahoma and moved there. During 1832 to 1839 thousands of eastern Cherokees and other Indians passed Point Remove, hundreds dying on the journey in the tragic "Trail of Tears" migration to Oklahoma. Conway County, Point Remove Park, Near Morrilton

On August 27, 1863 the Federal Army was advancing along the Military Road toward Little Rock when its Cavalry Division of 6000 men under Gen. John W. Davidson attempted a crossing here and was met by a Confederate force of 4000 under Gen John S. Marmaduke. After burning the bridge the Confederates defended the crossing under heavy fire throughout the day. Several attempts crossing failed and the Federals withdrew at sunset and two days later crossed the Bayou five miles southward. Little Rock ultimately fell on Sept. 10, 1863. Pulaski County, highway 161, southeast of Jacksonville (Military Road is also 294)

Toad Suck Ferry Faulkner County boasts colorfully named attractions. Toad Suck Park is the site of an Arkansas River Crossing dating back to 1820 and the current site of Toad Suck Ferry Lock and Dam. According to legend, steamboat crews waiting for the river to get deep enough for passage frequented a nearby tavern. Disapproving locals said, "They suck on the bottle 'til they swell up like toads." Facilities don't include a tavern now, but the original Toad Suck Ferry towboat is still on display. In May, Toad Suck Daze features toad-jumping contest, crafts, and a street dance.

Building was the site of the Arkansas Secession Convention of 1861 and seat of the Confederate Government until 1863. After the capture of Little Rock by Federal Forces the Old State House became headquarters of a Unionist State Government led by Isaac Murphy. The old state house, Little Rock

1840 building located in MacArthur Park in downtown Little Rock. Was surrendered to Governor Rector in February 1861 by its Union garrison. General Patrick Cleburne commanded some of the Arkansas troops that forced the surrender. It was used as an arsenal and hospital by Confederate forces until the fall of Little Rock. This building is also the birthplace of General Douglas MacArthur. It is reported to be the most "haunted" building in Arkansas with numerous citings of apparitions. For the moment it houses the Arkansas Museum of Science and History, but they will be moving to a new location soon. Some thought has been given to establishing a Civil War Museum in the building but no plans have been finalized. Pulaski County, Little Rock, MacArthur Park

"Ten Mile House" built between 1825 and 1836. First built for Archibald and Eliza McHenry from Tennessee. Slaves made bricks for the house. Built by Thomas Thorn. It was a Civil War military outpost. David O. Dodd, 17, was held there on spy charges December 1863. Was hanged January 1864. Pulaski County