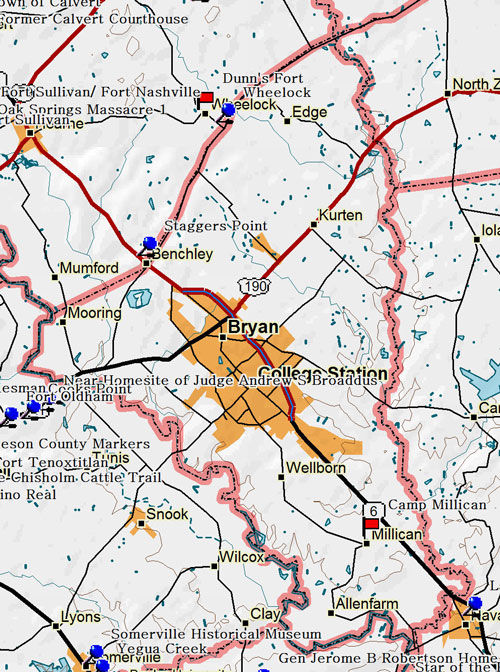 Marker Title: Brazos County
Address: 300 E. 26th St.
City: Bryan
County: Brazos
Year Marker Erected: 1936
Marker Location: 300 E. 26th St., Bryan
Marker Text: 1936 text: Created from Robertson and Washington Counties in 1841. First called Navasota, changed 1842 to Brazos after two rivers on county's boundaries. Organized in 1843, with Booneville as county seat; Bryan county seat since 1866. Area originally included in Stephen F. Austin's Second Colony, 1828. Became a part of the Washington municipality, 1837, under the Mexican government. First railroad reached Millican in 1860. A&M University opened, 1876. Economy based on agricultural, industrial and educational activities. Replacement text, 2000: Brazos County, part of Stephen F. Austin's colony, was created from Washington County in 1841. It was first named Navasota County, with Boonville as the county seat. In 1842 the name was changed to Brazos County. Through the Civil War, Millican, located at the end of the railroad from Houston, was a major town. When the railroad was continued through the county, Bryan became the county seat in 1866. The Agricultural and Mechanical College of Texas (Texas A&M) opened in 1876 and College Station grew around it, incorporating in 1938.

Marker Title: Brazos River
County: Brazos
Marker Text: Largest river between the Red and the Rio Grande, the 840-mile Brazos rises in 3 forks: the Salt, Clear and Double Mountain forks. According to legend, this river saved Coronado's Expedition of 1540-1542 from dying of thirst, so the men thankfully named it "Los Brazos de Dios" (Arms of God). On its banks were founded historic San Felipe, capital of Stephen F. Austin's Colony, and Washington, where in 1836 Texas' Declaration of Independence was signed. Vast plantations thrived in the fertile Brazos Valley, making cotton "king" in Texas until the Civil War.

Marker Title: Bryan, William Joel
City: Bryan
County: Brazos
Marker Location: N side of courthouse square; Bryan.
Marker Text: Native of Missouri. Member of prominent family who were Texas statesmen, planters, developers. Grandson of Moses Austin, who obtained from Mexico charter for American Colony in Texas, but died before making settlement. Nephew of Stephen F. Austin, "Father of Texas", who actually established the colony. Came to Texas with his mother, Emily Austin Bryan Perry, in 1831. During Texas Revolution, fought in Battle of Bexar, 1835. For 71 years was a planter on land near Peach Point, where the bachelor Stephen F. Austin had a room reserved for him in Perry Home. As eldest nephew, inherited family leadership when Stephen F. Austin died in 1836. Backed his brothers' careers, especially in the case of Guy M. Bryan, U.S. Congressman 1858-1860, and for many years a leader in Texas government. During the Civil War, cared for business interests of his 4 sons in the Confederate Army. At his own expense fed Confederate troops stationed near his plantation to defend the Texas coast. Backed construction of Deep Water Harbor at mouth of the Brazos. During building of Houston & Texas Central Railroad, donated site for Bryan, which in 1866 became county seat of Brazos County.

Children's Museum of the Brazos Valley

Marker Title: El Camino Real
County: Brazos
Marker Location: From Bryan take SH 21 approx. 10 miles to OSR (Old San Antonio Road) E; marker is located near OSR stop sign onto SH 21.
Marker Text: Great thoroughfare of pioneer Texas, stretching 1,000 miles from Saltillo, Mexico, to present Louisiana. The general route followed ancient Indian and buffalo trails, but the oldest marked portion, known as "Trail of the Padres", was blazed in 1691 under Domingo Teran de los Rios, first Governor of Texas. This part joined Monclova, then capital of the province, to the Spanish missions of East Texas. San Antonio, military nerve center of the region, was a major stop. Over the centuries, explorers, traders, smugglers, armed men, and civilians traversed this road. In 1820 Moses Austin traveled it to San Antonio to request a land grant from Spanish officials. The colonizing venture he started later brought thousands of Anglo-Americans over the road to help settle Texas. In 1915 the Texas Legislature appropriated $5,000 to survey and mark the route. The Daughters of the American Revolution and other patriotic groups sponsored and endorsed the project, and V.N. Zivley was commissioned to make the survey. In 1918 the state and D.A.R. placed granite markers approximately every five miles along the Texas section of the road. Today many modern highways, particularly State 21, follow the original route of El Camino Real.

Marker Title: Millican, C.S.A.
City: College Station vicinity
County: Brazos
Marker Location: From College Station take FM 2154 SE approx. 14 miles to the intersection of FM 2154 and FM 159.
Marker Text: Millican was Texas' northernmost railroad terminus when the war between the states began in 1861. It became a vital Confederate shipping point for the area extending to the Red River on the north and to be frontier settlements in the west. The products of that region moved over the rails of the Houston and Texas Central Railroads from Millican to Houston, Beaumont, Galveston and Alleyton. Confederate troops came by rail to nearby Camp Speight, a training and rendezvous point. Many marched overland from here for duty in Arkansas and Louisiana. Other entrained here for Houston and Beaumont where they borded ships for Neblett's Landing on the Sabine and other devarkation points. During the war cotton from North Texas and the Brazos Valley went to market through Millican to Alleyton, the state's southernmost railroad terminus, where it was transported over the cotton road by wagons and carts to Brownsville and Matamoros, Mexico. Returning wagons and carts brought military supplies and merchandise which eventually reached Millican by rail for wide distribution. Millican, which had been born with the coming of the railroad in 1859, flourished with the railroad, and declined with the northward extension of the railroad that began in 1866.

Marker Title: William Templeton Millican
Address: 3 mi. NW of Millican on FM 2154, then 1 mi. W on High Prairie Rd.
City: Millican
County: Brazos
Year Marker Erected: 2002
Marker Location: 3 mi. NW of Millican on FM 2154, then 1 mi. W on High Prairie Rd.
Marker Text: William Templeton Millican Old Three Hundred Colonist William T. Millican was born in South Carolina about 1780 and came to Texas with his parents and siblings in 1821. They joined Stephen F. Austin's first colony and were granted land in this area on which to make their home. The community that grew up around their land became known as Millican. W. T. Millican's property was granted in 1824, and in the 1826 census he was listed as a farmer and stock raiser. Just prior to the outbreak of the Texas Revolution, he served as a delegate to the consultation at San Felipe in 1835, which endorsed the establishment of a provisional government for the colonists. The Millican family fled their home in 1836 as part of the Runaway Scrape, as news spread of Sam Houston's retreat eastward from Mexican general Santa Anna. Millican's father, Robert Hemphill Millican, died during the flight. By the time the rest of the family reached Liberty, victory had been won at San Jacinto and they returned to their home. From April until July 1836, W. T. Millican served in the Republic Of Texas army to guard the frontier and posthumously was awarded land at this site from Sam Houston for his service. During the years of the Republic, Millican served as a public official in several capacities, including Justice of the Peace and a member of the committee appointed to select a county seat for Brazos County (first called Navasota County) upon its establishment in 1841. He died two years later and was buried in the Weaver Cemetery in Millican. (2002)

Marker Title: Texas A&M University
City: College Station
Year Marker Erected: 1978
Marker Location: Main entrance to Texas A&M Univ. off Texas Avenue, College Station
Marker Text: The State Legislature authorized the Agricultural and Mechanical College of Texas April 17, 1871, under terms of the Federal Morrill Act. Constitutionally a part of a chartered, yet-unorganized state university, A&M gained its own directorate in 1875 with Governor Richard Coke as Board President. Brazos Countians provided its 2,416-acre site. Committed to "teach...branches of learning...related to agriculture and mechanic arts...to promote liberal and practical education," A&M opened Oct. 4, 1876, as the first state institution of higher learning actually operating in Texas. Thomas S. Gathright was President. Its original six students in seven academic departments grew to 28,038 students in eleven academic colleges by 1976. Initially an all-male, all-white school, it was desegregated as to color in 1963 and made fully coeducational in 1971. The Legislature recognized its diversified programs and international leadership in education and research by awarding the new name, Texas A&M University, on Aug. 23, 1963. On Sept. 17, 1971, the U.S. Congress made this one of America's first four Sea Grant Colleges. National defense has drawn from Texas A&M thousands of ROTC men, including 29 general officers for World War II.

Texas' northern most terminal of the Houston and Texas Central Railroad was the settlement of Millican. It became the site of Camp Millican during the Civil War. Enlistees arrived by train to this camp that was nothing more than a gathering site. Sometimes recruits were trained here before marching for duty in Arkansas and Louisiana but some went to nearby camps to train. A marker for Camp Millican is across from the Millican Post Office on Highway 159.