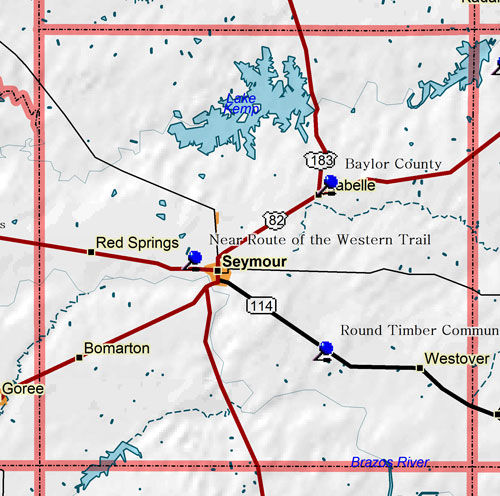 Marker Title: Round Timber Community
City: Seymour
County: Baylor
Year Marker Erected: 1972
Marker Location: From Seymour, take SH 114 SE about 8 mi. to FM 1285 S. - follow FM 1285 to FM 2374, and follow FM 2374 South to Round Timber Cemetery.
Marker Text: Named for round clumps of oaks. Pioneered by C.C. (Lum) Mills, 1863, but soon abandoned to Indians, site became the first permanent settlement in Baylor County when reopened in 1874 by T.K. Hamby, C.C. and W.B. Mills, John W. Stevens and Tom Whitworth. Post Office opened in 1879 with A.C. Burnham as postmaster. In school built in 1879, first teacher was Eliza Mitchell. Town had stores, barber and blacksmith shops, 1880s. The church was built by Methodists, 1879, sold to Baptists, 1933. The burial ground, dating from 1870, was deeded 1962 by J. Hop Parker to the cemetery association. Incise on back: Marker sponsored by Harry and Helen Portwood. 1972.

Marker Title: Near Route of The Western Trail
City: Seymour
County: Baylor
Year Marker Erected: 1972
Marker Location: From Seymour, take US 82 1 mi north to Roadside Park.
Marker Text: Principal cattle trail from Texas to Kansas and beyond from 1876 to 1887; superseded the Chisholm Trial after Dodge City replaced Abilene as the main intermediate northern beef market. As its name implies, the Western Trail ran west of the Chisholm Trail, by about 100 miles. Most of its feeder trails started in South Texas, although some made connections at San Antonio and Fort Griffin. Here in Baylor County the trail crossed Brazos River, passing half a mile east of Seymour, a major supply center. The herds bedded near Seymour Creek, at the site of the present Fairgrounds. The Millett Ranch (established 1874) served as a watering spot, and the Millett Brothers--Eugene, Alzono, and Hiram-- were among the first users of the trail. From Seymour the route continued north, leaving Texas at Doan's Store on the Red River. It then ran through Oklahoma to Dodge City, with lesser extensions proceeding to Nebraska, Wyoming, and Montana. During its life, the Western Trail moved hundreds of thousands of cattle north to stock ranges, Indian reservations, and markets. But after the fencing of the open range and building of the Texas & Pacific Railroad, it ceased to be used by the cattle industry. (1972)