Marker Title: Archer County Copper Mines
Address: 4.5 mi. NW on SH 25
City: Archer City
Marker Erected: 1971
Marker Location: From Archer City, take SH 25 northwest about 4.5 miles.
Marker Text: The civilized world first heard of copper in this area from Texas Rangers after an 1860 campaign against Comanches on the Pease River, about 100 miles to the northwest. The Ranger Captain, Lawrence S. ("Sul") Ross, later to serve Texas as governor, had nuggets picked off the surface of the ground and hauled to Austin. In 1861, Assistant State Geologist S.B. Buckley charted the mineral site. The Rangers' ore haul was processed and used in gun caps for Confederate forces during the Civil War. To get more of the needed metal, the Texas Copper Mining & Manufacturing Company was founded on May 28, 1864, but wartime shortage of men apparently prevented recovery of copper at that time. The T.C.M.&M. Co., based in Dallas, sent W.F. Cummings to Archer County in 1880 to open mining sites. Although the Texas Commissioner of Agriculture and Statistics reported in 1882 that no mining had commenced, ore eventually was hauled out and shipped to smelters in the east. No central vein or deposit could be found. The Boston & Texas Copper Company of Tucson, Ariz., leased the mine site here in 1899. It produced some copper ore which was processed in El Paso, but again the project failed to meet expectations. (1971)

Battle of the Little Wichita

Marker Title: Battle of the Little Wichita
City: Archer City
Year Marker Erected: 1974
Marker Location: from Archer City, take FM 25 North about 2 miles to roadside park.
Marker Text: In reaction to an Indian attack on a mail stage, Capt. Curwen B. McLellan set out on July 6, 1870, from Fort Richardson with 56 men of the 6th Cavalry. On July 12, McLellan's command encountered a war party of 250 Kiowas led by "Kicking Bird" near the north fork of the Little Wichita (6 miles NW). After a brief skirmish, McLellan ordered his troops into retreat, fighting a defensive battle across the middle and south forks of the Little Wichita. The Indians gave up the chase on the 13th. Corporal John Given and Private George Blume were killed; 13 Medals of Honor were awarded for heroism. (1974) More

Confluence of the Brazos, Trinity, and Red River Watersheds

Marker Title: The Confluence of the Brazos, Trinity, and Red River Watersheds
City: Olney
Year Marker Erected: 1976
Marker Location: From Olney, take US 79 3 miles north.
Marker Text: The Trinity, a major Texas river rises 250 yards west of this 1250-foot mound. South of this site water drains to the Brazos, and north and west to the Red. This high point has been important in Texas history. It guided Capt. Diego Parilla to battle Indians on the Red in 1759 and aided Capt. R.B. Marcy in mapping a California trail in 1849. Marcy and Maj. R.S. Neighbors used it as a beacon point in finding a site for an Indian reservation in 1854. It also was on U.S. Cavalry maps for 1870s Indian campaigns. (1976)

In Vicinity of French Trading Area

Marker Title: In Vicinity of French Trading Area (4.5 Miles West)
City: Archer City
Year Marker Erected: 1969
Marker Location: from Archer City, take FM 25 North about 2 miles to roadside park at intersection with FM 210.
Marker Text: In the mid-1700s, Indians of this region met at a trading ground near this site with Frenchmen who brought them manufactured goods, sometimes including guns and ammunition--products denied them by the Spanish who held sovereignty, but could not prevent intrusions from Louisiana. The Spanish explorer Jose Mares on a road-mapping expedition here in 1787 saw evidences of the French. Among noted early-day visitors were Captain R.B. Marcy of the U.S. Army and Indian agent R.S. Neighbors, who camped nearby in 1854 while seeking a good site for an Indian reservation. (1974)

Marker Title: Captain John Holliday
City: Holliday
Year Marker Erected: 1973
Marker Location: From Holliday, take US 82 north about 1 mile.
Marker Text: (Dec. 8, 1811 - Aug. 19, 1842) Born Hollidaysburg, Pennsylvania; came to Texas about 1835, joined Texian Army, and was one of 24 survivors of the Goliad Massacre, March 27, 1836. Joined Texian-Santa Fe Expedition, and en route to New Mexico, Aug. 4, 1841, carved his name on a tree in this vicinity. After reaching Santa Fe, the party was arrested and marched to Perote Prison near Mexico City. In Aug. 1842, Holliday was released, but he died of yellow fever aboard ship two days from Galveston, and was buried at sea. Nearby Holliday Creek and the town of Holliday were named for the carving on the tree. (1973)

Marker Title: A Jesse James Hideout
City: Archer City
Year Marker Erected: 1972
Marker Location: Courthouse lawn, Highway 79, Center Street, Archer City.
Marker Text: Jesse James, celebrated 1860s-1882 Missouri outlaw, used to visit in Archer City in house built by Stone Land and Cattle Company for its manager, Allen H. Parmer (1848-1927), his Confederate comrade of the Civil War and husband of his sister Susan (1849-89). With Frank James, his brother and aide, the outlaw chief hid at the Parmers' when hunted for train and bank robberies or on other occasions. Jesse James was killed in 1882; Frank and his wife continued to visit at Parmer's house, which was later moved from original site. Parmer brought up a family of respected, upright citizens. Erected by Archer County Historical Survey Committee. House is shown only by appointment, 1972.

On Route of the Comanche Exodus

On October 31st 1870, Captain Tullius C. Tupper's Group G, Sixth Cavalry spent seventeen days scouting between Little and Big Wichita River, Texas, south and east of the Little Wichita. The distance marched was two hundred and thirty miles. They were attacked by Indians on the night of October 6th at 10:30 p.m., about three miles north and thirty-five miles from the mouth of the Little Wichita River. The charge of the Indians was promptly repulsed. Nine horses belonging to the company were lost during the engagement. Heavy and almost incessant rain commenced on the following day and continued for 36 hours, rendering a successful pursuit of the Indians impossible. 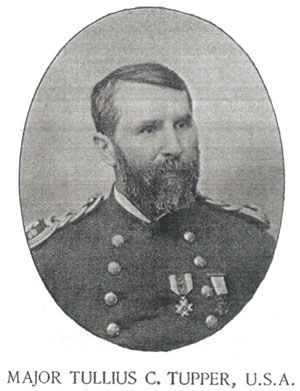 On May 12, 1872, Captain J.A. Wilcox was in command of detachment troop C, Fourth U.S. Cavalry, between Big and Little Wichita River, Texas when they were attacked by the Kiowas. Two Indians were killed and one soldier wounded.

Capt. W.A. Rafferty commanding station at Fort Richardson, Texas, Troop M, Sixth Cavalry on September 26, 1870, left with twenty-two enlisted men of the company and one officer on a scout trip and returned to the post October 7th. They marched a distance of two hundred and thirty miles, killed two Indians beyond Little Wichita River and about sixty-five miles northwest of Fort Richardson, capturing eighteen horses.