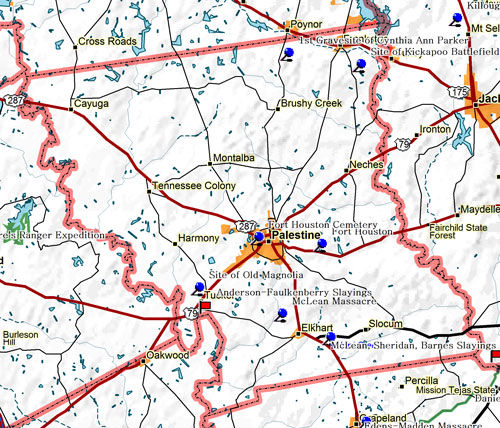 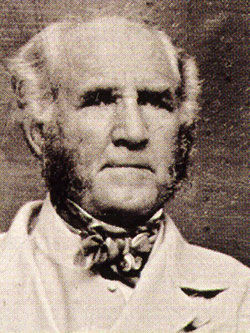 Marker Title: Fort Houston
City: Palestine
County: Anderson
Year Marker Erected: 1936
Marker Location: about 2 mi. from Palestine off US 79S on FM 1990 just past tracks, behind Palestine Concrete
Marker Text: A fort and stockade built about 1836 on the public square of the town of Houston (then in Houston County), as a protection against the Indians, by order of General Sam Houston, Commander-in-Chief of the Texan armies. The town was abandoned in 1846 for Palestine, the new seat of Anderson County, the fort about 1841. The site is now a part of the historic home of John H. Reagan, which is called Fort Houston. 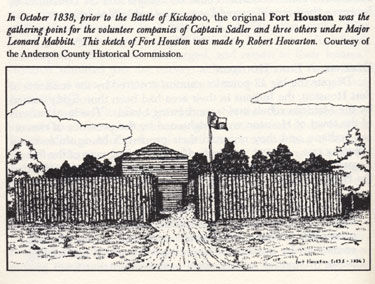 Sketch from the book, Taming Texas, by Stephen L. Moore

Marker Title: Fort Houston
City: Palestine
County: Anderson
Year Marker Erected: 1969
Marker Location: Intersection of US 79 and FM 1990, 2 mi. south of Palestine, .25 mi. north of Ft. Houston on FM 1990 just past tracks.
Marker Text: (site one-fourth mile south) A stockade and blockhouse of the Republic of Texas. Built in 1835-1836 to protect settlers who founded Houston, a pioneer town, now in Anderson County. Friendly Indians would come to trade at the site, but wary settlers often slept inside the 25-foot-square blockhouse, built of heavy logs. Trappers bought supplies there and men from Houston formed one of the first Ranger units in Texas. The fort defended a large area of the frontier, 1836-1839, but it was abandoned about 1841. The site later became part of home of John H. Reagan, Texas Statesman. 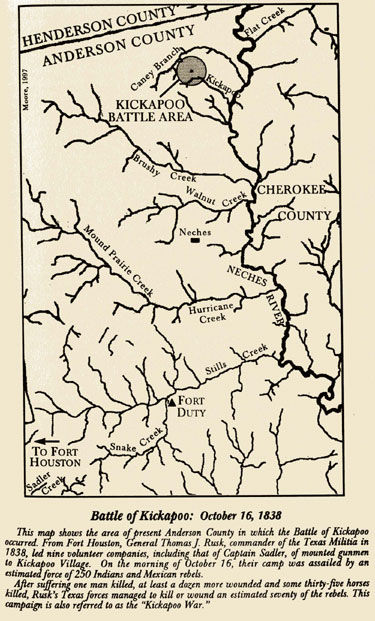 Site of the Kickapoo Battlefield

Site of the McLean Massacre

Marker Title: Site of the McLean Massacre
Address: 8 mi. S on FM 2419 to E. CR 185
City: Palestine
County: Anderson
Year Marker Erected: 1936
Marker Location: about 8 mi. south of Palestine via FM 2419 to E. CR
Marker Text: Daniel McLean and John Sheridan, expert Indian fighters employed by the settlers as guides and protectors, were killed here in 1837. By holding the savages in check until the settlers could escape, both sacrificed their lives. More 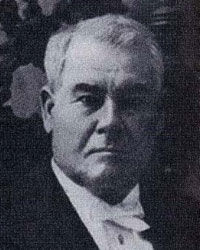 Marker Title: John H. Reagan
Address: Corner of Crockett Rd. & Park Ave.
City: Palestine
County: Anderson
Year Marker Erected: 1994
Marker Location: corner of Crockett Rd. and Park Avenue
Marker Text: John Henninger Reagan, son of Timothy and Elizabeth Lusk Reagan, was born on October 18, 1818, in Sevierville, Tennessee. He joined the Republic of Texas Army in 1839 and served in the Cherokee War. In the early 1840s he held several public offices in Nacogdoches County, and in 1847 obtained a law license and was elected to the Texas House of Representatives. He moved to Palestine in 1851 and opened a law office in his home. He was elected Texas 9th Judicial District Judge in 1852. Reagan, elected U.S. Congressman in 1857, resigned in 1861 over what he believed was a Federal takeover of states' rights. He served as postmaster general of the Confederacy during the Civil War. He was captured by Federal troops in 1865 and imprisoned for 18 months. He returned to Texas in 1866 and established a family farm near Palestine at the former site of Ft. Houston. During his tenure as a U.S. Congressman (1876-87) and U.S. Senator (1887-1891) Reagan led the fight that brought railroad monopolies under Federal control with the passage of the Interstate Commerce Act in 1887. In 1891 he became the first chairman of the Texas Railroad Commission, a position he held until 1901. Reagan died of pneumonia on March 6, 1906. The entire Texas legislative assembly attended his funeral. (1994)

January 28th, 1837, A six man Ranger party left Fort Houston in search of hogs. They gathered some hogs and sent them back with two of the rangers. The other four spent the night and waited for the other two to return with a canoe so they could work the other side of the river. The four were attacked by Indians. Colombus Anderson was hit by the first shot and mortally wounded. David Faulkenberry was shot but yelled "C'mon boys, it's time to go." With that, all jumped in and swam across the Trinity, in spite of their wounds. One Indian tale claimed that Faulkenberry fought like a wild man, killing two Indians and wounding a third. Though wounded and scalped, he threw himself into the river and swam to the middle, where he sank out of sight. More