Joseph Fowler, about sixteen, brother of Mary Ann Fowler, and son of Mrs. Gage by a former husband, had penned one ox and was down in the pasture, at the time, almost a mile from home, in search of another.

When the Indians arrived at the frontier home of Calvin Gage, who was away, they shot and killed Jane Masterson, dragged from her home in the manner mentioned in the preceding section. The Indians brutally slaughtered Mrs. Katy Sanders. They also shot Mrs. Calvin Gage, several times with arrows, knocked her in the head and left her for dead. Polly was also seriously wounded and left to die a lingering death. But she and her mother recovered. The death of Mrs. Gage, however, several years later was largely attributed to this horrible onslaught of the savages. The Indians also shot Mary Ann Fowler and Johnathan Gage. And to appease their peculiar sense of humor tossed one of the babies of Mrs. Gage high up in the air only to see it fall flat on the ground. To intensify the excruciating pain of this innocent little infant, it was again several times tossed backward over an Indian's shoulder.

Then at the home of Calvin Gage, the Indians murdered Mrs. Katy Sanders, mother of Mrs. Gage, and left the latter dead; they also left Jonathan Gage, Polly Gage, and Mary Ann Fowler badly wounded. No doubt, the Indians thought each would die. They killed Jane Masterson as has already been related. These brutal barbarians then ripped open seven feather beds and emptied the feathers on the ground; and after pilfering and plundering to their hearts content, rode away and took with them Katherine Landman, Matilda Gage, and little Hiram Fowler. Matilda and Katherine, both about fourteen years of age were savagely abused, stripped of most of their clothes and then released.

By this time the girls could hear Joseph Fowler driving the belled oxen, which had strolled away. Consequently, instead of returning home, in their pitiable condition, they hurried to convey the news to Joseph Fowler, for fear he would run into and be massacred by the Indians. The three cautiously hurried to the house, and Joseph Fowler personally told the author that it was impossible to conceive of the terrible scene he saw on that occasion. A cold wind was coming from the north and feathers were so badly scattered, they resembled snow. Joseph and the two girls carried Mrs. Gage and Mary Ann into the house, but Jonathan and Polly were able to walk.

As soon as possible, Dr. S.A. Cole and Dr. Milton Hays were called to the aid of the injured, all of whom in due time recovered. But the death of Mrs. Gage several years later, was attributed to her old wounds. About one year after this tragedy the bones of little Hiram were found several miles away, where he had either been murdered by the savages or turned loose to starve. So up to this time the Indians had killed five people, left four for dead, and carried Katherine Landman and Matilda Gage several hundred yards from home.

A little later during the same day after the Indians charged the home of these two frontier families, news was narrated in all directions, and a posse of men was soon on the Indian's trail. Joseph Fowler left the bedside of his dead and wounded, to convey the sad news to James Landman and his stepson were just ready to start for home, and can we really imagine the shocking effect of this sad news? And again can we realize the paralyzing effect of the horrible scene which presented itself to Mr. Landman at the time he reached his frontier home? Joe Fowler then crossed the creek to the home of Wiley Gunter, John Fowler, etc., to relate to them his sad story. When he returned home, it was already dark. Numbers of people at that time had gathered in. Needless to say, every able bodied person was ready to shoulder arms against the savages. For such a sight they had never before seen.

Note: Before writing this and the preceeding section the author personally interviewed Joseph Fowler himself, a stepson of Calvin Gage, and the same Joseph Fowler who was driving the belled oxen, when this tragedy occurred.

Also interviewed A.M. Lasater, whose father-in-law was murdered by these same Indians the following day, B.L. Ham, James Wood, and others who were then living in that section. 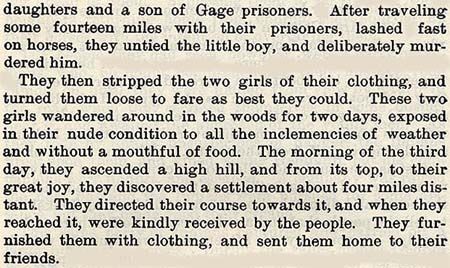