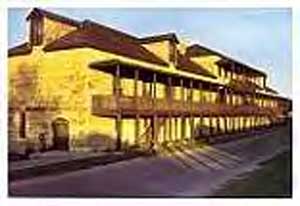 Fort Clark, located on US Hwy 90 on the east side of Brackettville, was established June 20, 1852 at Las Moras Springs by two companies of the First Infantry under the command of Major Joseph H. LaMotte along with an advance and rear guard of U.S. Mounted Rifles (later the 3rd Cavalry). Located at the headwaters of Las Moras Creek, the spring, named "The Mulberries" by Spanish explorers was a site long favored as camp grounds for Comanche, Mescalero, Lipan, and other Indians. During the late eighteenth and early nineteenth century, the big spring was a stopping place on the eastern branch of the great Comanche War Trail into Mexico. The original site was a strip of 1 to 2 miles in width extending from Las Moras Springs downstream about eight miles.

In 1849 Lieutenant W.H.C. Whiting, during his reconnaissance for a practicable route between San Antonio and El Paso, recognized its military potential and recommended the location as a site for a fort. The land was leased from S.A. Maverick. Two Companies (C and E) of the First Infantry encamped near the Springs. Later, the garrison was moved up the hill from the Spring. By 1853 quarters for the soldiers were nearly completed and in 1854 three grass-covered officers' quarters were built. In 1855 a stone hospital and a two-story storehouse were erected.

The Post was originally named Fort Riley in honor of the commanding officer of the First Infantry, but on July 15, 1852, at Riley's request, it was renamed in honor of Major John B. Clark, a deceased officer who had served in the Mexican War. A formal military lease for Fort Clark was made on July 30, 1852, by Lt. Col. D.C. Tompkins. 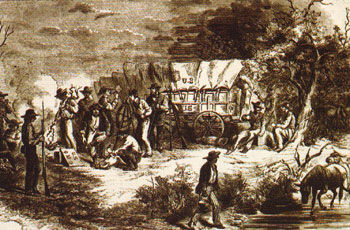 With the onset of the Civil War and the secession of Texas, the Federal soldiers left Fort Clark March 19, 1861, and returned December 12, 1866. Until August 1862 the Fort was occupied by the Second Texas Mounted Rifles. It later served as a supply depot and a hospital for Confederate troops and civilians in surrounding areas.

With the establishment of Fort Clark, a neighboring settlement of Las Moras came into existence when Oscar B. Brackett established a supply village for the Fort. The town's name was changed to Brackett in 1856, and later to Brackettville. The stage ran through the settlement and for almost a century the town and the Fort remained closely identified.

Fort Clark is perhaps most famous as the home for the Seminole-African Indian Scouts. After twenty years of protecting Mexico's northern states from hostile Indians for the Mexican Army, they came to Fort Duncan in 1872 and to Fort Clark to server the Army as scouts. The Indian Scouts served at Fort Clark from 1872 until 1914. Lt. John L. Bullis, later a general, was to server as their commander from 1873-1881. Fort Clark is also noted as the headquarters for Colonel Ranald S. Mackenzie's raiders. He led raids into Mexico to punish renegade Indians, playing a decisive role in bringing to and end the Indian depredations in Texas. Comanches on horseback swept down from the north on moonlit nights, raiding, killing, taking horses, mules, and cattle, and escaping across the Rio Grande into Mexico. Lipans and Kickapoos from Mexico slipped across the border into Texas, destroying, stealing, murdering, and returning quickly to safety. Outlaws of every nationality fled from one side of the border to safety on the other side. Hundreds of pioneers were forced to abandon their homesteads.

On May 17, 1873 Mackenzie, accompanied by Lt. Bullis and the Seminole-African Indian Scouts, let troops of the 4th U.S. Cavalry into Mexico on a punitive expedition against the Lipans. Other sorties followed. Again in 1878, Mackenzie was recalled to Fort Clark to stop the Kickapoo's war on Texas. Mackenzie with Bullis and Seminole Scouts and a large peace-time army crossed the border to effectively stop the Mexican Army and end the Mexican-Indian hostilities forever. The last Indian depredation in the Military District of the Nueces was in 1881.

Many infantry units and virtually all cavalry units, including the 9th and 10th black "Buffalo Soldiers", were stationed at Fort Clark at various times. During the Spanish-American War, Fort Clark was garrisoned by the Third Texas Infantry. With the Indian Wars at an end, the Fort was threatened with closure, but turmoil along the border due to the Mexican Revolution revitalized the military need for the Fort, as did the First World War, which soon followed.

Photo of a cavalry horse and company guidons that mark the entrance to Fort Clark. Taken by Charles M. Robinson, III from the book Frontier Forts of Texas.

Some famous officers who served at Fort Clark were:

In 1941, the 5th Cavalry was transferred to Fort Bliss and Fort Clark was then manned by the 112th Cavalry, Texas National Guard Unit, until their deployment for combat duties in the Pacific. Later, more than 12,000 troops of the second Cavalry Division trained at Fort Clark until their deployment in February, 1944. The war also added another feature to the history of Fort Clark, that of having a German POW sub camp on the 4,000 acre reservation.

By the end of World War I, the technological advancement of modern arms signaled the obsolescence of the horse cavalry. Yet it was not until June, 1944, that full mechanization of the cavalry caused the government to close Fort Clark, one of the last horse-cavalry posts in the country. The Fort was officially deactivated in early 1946, and later that year was sold to Brown and Root Company for salvage and later used as a guest ranch.

In 1971, the Fort was purchased by a private corporation and developed into a private recreation community. Today Fort Clark encompasses about 2700 acres. The spring feeds Las Moras Creek and a dam also feeds the water into a very large swimming pool with a year-round temperature of 68 degrees. Below the dam, fishermen, bird watchers, hikers, picnickers, and campers enjoy the beautifully wooded Las Moras Creek banks. The Historic District of the Fort remains much as it was planned and built in the 1800's. The history is displayed by six dioramas created by members of the Fort Clark Arts for the Old Fort Clark Guardhouse Museum maintained by the Fort Clark Historical Society. Visitors at the museum are welcomed by volunteer hosts and hostesses. In 1979, Fort Clark was entered on the National Register of Historic Places. The museum has local and pioneer history exhibits. Saturday, Sunday 1–4.

Fort Clark is truly a fort closure that became a success story, and is "Living History Today".

In November of 1873, thirty Kiowa and Comanche warriors crossed the Rio Grande west of Laredo and killed fourteen Mexicans before turning home with two boy captives and 150 horses and mules. As they pushed their stolen herd north they killed two Americans. The two Mexican boys managed to escape and took the story of their capture to Fort Clark. On December 7 a forty-one man scouting party under Lieutenant Charles L. Hudson intercepted the Indians. In a running fight the soldiers killed nine members of the war party. Among the dead were the favorite son of Lone Wolf and a nephew. From this point on, Lone Wolf knew only hatred for the whites.