Capt. Will R. Peveler, State Cox, and Others Fight Near Cox Mountain

During 1863 Will R. Peveler was 2nd Lieutenant in Capt. Newt. White's Company G, of the Frontier Regiment, which was stationed at Ft. Belknap. But after the reorganization of 1864, Will R. Peveler was placed in command of a company in Young County, which in a measure, had been his home since 1852, when he first arrived as a meat contractor of old Fort Belknap. State Cox, during 1864, was sheriff of Young County, and Geo. Hunter, Perry Harmison and Cole Dunken, were well known on the western frontier. These gentlemen were returning from a "Round up" in Jack County, and were slowly driving about fifty head of cattle through the mesquite flats, about one-half mile west of Cox Mountain in Young County, when fifty savages suddenly dashed upon the citizens from the rear, and began saying, "How de do, how de do." The five Texans had not anticipated danger, were poorly armed, and some of them were poorly mounted. So they decided to dismount, tie their horses to mesquite trees, and sell their lives as dearly as possible, or fight it out with the Indians.

When the Texans realized they were surrounded by such overwhelming numbers, Parry Harmison said, "Boy's, let's get away if we can."

Hunter replied, "Yes I am wounded, and I am shot in the arm."

Cox said, "I am killed, I am shot through the body." According to one report State Cox further said, "Go and leave me boys, I am killed."

But F.M. Peveler, brother of Will R. Peveler thinks State Cox said, "Don't leave me boys." Perry Harmison and Geo. Hunter, riding good horses, were the first to mount their steeds, and dash away. Will R. Peveler, also riding a young horse, had some difficulty in getting in his saddle as quickly as others. So Cole Dunken assisted Capt. Peveler. These two then dashed away, and Dunken was in the lead to encourage Peveler's young horse to run as fast as possible. Will Peveler's pony soon became gaited, and although Cole Dunken made his escape, the savages, which pursued the two, soon separated Peveler from Dunken. A majority of the Indians were on ahead, after Perry Harmison and Geo. Hunter. When Will R. Peveler reached a ravine, where the trail crossed, he had been wounded several times, and it seems the Indians had ceased their shooting, and one savage thinking their victim was nearly dead, reached forward and caught Peveler by the shoulder. Peveler then shot and broke the neck of the savage, who fell in the ravine, and prevented others from crossing. This enabled Capt. Peveler to reach the timber one or two hundred yards away. As he was traveling the same trail, followed by the Indians in pursuit of Harmison and Hunter, Will Peveler turned abruptly to the right, crossed Flint Creek, and started down the opposite side of this stream to avoid the return of the other savages. In this way he made his escape to Flag Springs, about six miles away. When this point was reached, Peveler, who had been wounded seventeen times, had to be lifted from his horse.

A courier was dispatched to Palo Pinto for Dr. Brock. When he arrived, he had no instruments sufficiently strong to extract an arrow point lodged under Capt. Peveler's ear. It became necessary to make an instrument in the shop for this purpose. The arrow point was then successfully removed. Capt. Peveler lived twenty-one days before he died.

During the excitement, it is supposed that State Cox mounted his horse, and forgot to untie him, for his animal had broken its neck. When Cox was last seen by his comrades, he had apparently, "Fired out," and was fighting the savages with a butcher knife. Perry Harmison and Geo. Hunter reached the ranger camp on Whiskey creek, near the present town of Newcastle, about sundown. The rangers went to the scene of the battle, and found State Cox, but Will Peveler, contrary to expectations, was not there. Hunter and Harmison reported that Will had been killed, but a runner the next morning reported to the ranger camp that Peveler was alive, and at Flag Springs. State Cox was hauled in a wagon to old Fort Belknap and buried there in the citizens graveyard, on the east side of town. Will R. Peveler was buried at Greenup Peveler's home, on the clear fork about three miles east of Eliasville. 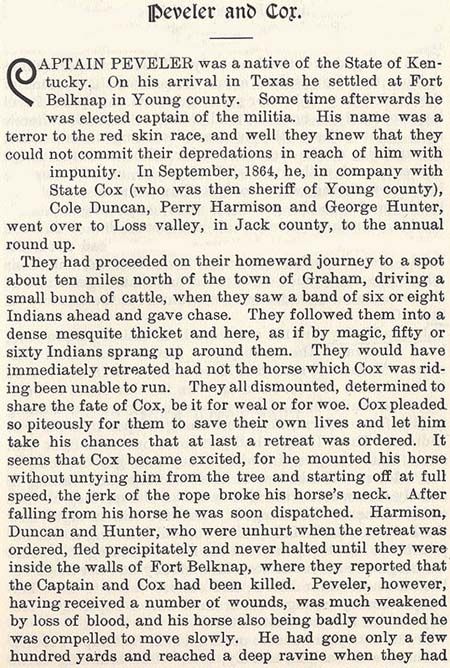 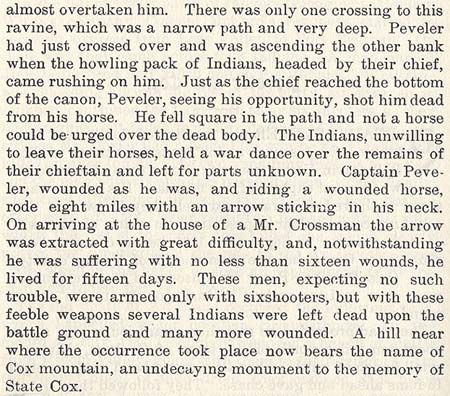