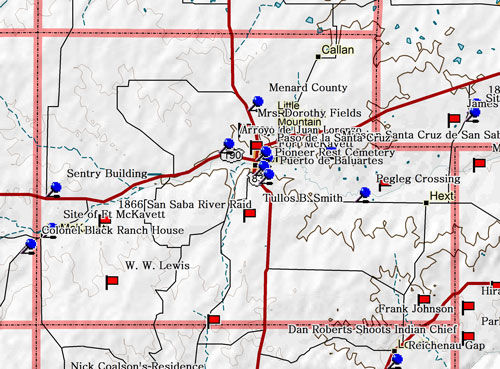 Marker Title: Arroyo de Juan Lorenzo
Address: US 90 at Celery Creek Bridge
City: Menard
Year Marker Erected: 1964
Marker Location: on US 190 at the Celery Creek Bridge, about 1 1/2 miles west of Menard.
Marker Text: Name used by Spaniards of Presidio de San Saba (in existence from 1757 to 1770) for this stream now called Celery Creek. Stone to build Presidio was quarried from bluffs along the creek, and deep banks let hostile Indians approach undiscovered, to attack the Presidio, half a mile to the southwest.

Marker Title: Fort McKavett, C.S.A.
Address: Canal and Gay St., on Courthouse lawn
City: Menard
Year Marker Erected: 1963
Marker Location: Courthouse lawn (corner of Canal and Gay Streets) Menard.
Marker Text: Located 21 miles west. Upon secession, Confederate cavalry occupied this post to give protection against Indians. Early in 1862 this Fort confined group of Union troops from surrendered U.S. forts who were seeking to leave the state at start of Civil War. Permanent personnel left the post in April 1862 when the frontier defense line was pulled back more than 60 miles east. However scouting parties and patrols of confederate and state troops used the fort intermittently in aggressive warfare to keep Indians near their camps and away from settlements and to check on invasion by Union forces. Usually supplying their own mounts, guns and sustenance, these men guarded the frontier until war's end. Texas had 2000 miles of coastline and frontier to defend from Union attack, Indian raids, marauders. Defense lines were set to give maximum protection with the few men left in the state. One line stretched from El Paso to Brownsville. Another had posts set a day's horseback ride apart from Red River to the Rio Grande. Fort McKavett and other U.S. forts used by scouting parties lay in a line between. Behind these lines and to the east organized militia, citizens posses from nearby settlements backed the Confederate and state troops to curb Indian raids. A memorial to Texans who served the confederacy Erected by the State of Texas 1963.

Marker Title: Site of Mission Santa Cruz de San Saba
Address: FM 2092, E of Menard
City: Menard
Year Marker Erected: 1936
Marker Location: on FM 2092 about 3 miles east of Menard.
Marker Text: Founded among the Lipan Apache Indians by Franciscan Missionaries in 1757 through the financial aid of the Count of Regla. Sacked and left in ruins by the Comanches in 1758. Here perished Padres Alonso Giraldo de Terreros and Jose Santiesteban, Martyrs to the Christian cause.

Marker Title: Mission Santa Cruz de San Saba
Address: Off US 190 at Menard Country Club
City: Menard
Year Marker Erected: 1962
Marker Location: on grounds of Menard Country Club about 1/2 mile off US 190, about 1 1/2 miles west of Menard.
Marker Text: This building was originally built as a presidio or fort and the Mission was apart from it. After the Mission was attacked and burned by Indians, all personnel moved into the presidio.

Marker Title: Paso de la Santa Cruz
Address: US 190/83 intersection
City: Menard
Year Marker Erected: 1964
Marker Location: near the intersection of US 190 and US 83 in Menard.
Marker Text: Spot where in 1753 Juan Galvan, Spanish explorer, put up a huge cross, to show his choice of site for Mission San Saba. Indians gathered at the cross, remaining to participate in the first known Christian worship service in this area. The Mission, 2 miles east, and the River Ford were both named for the cross.

Pegleg Crossing on the San Saba

Marker Title: Pioneer Rest Cemetery
Address: US 83, south side of Menard
City: Menard
Year Marker Erected: 1973
Marker Location: on US 83 (west side of road) on southern edge of Menard.
Marker Text: Burial plot was begun by Adam Bradford, who buried his father, Jack Bradford, here in 1863. As the town and cemetery grew, the city bought the tract from Mrs. Gustav E. Schleicher in 1904. Fence surrounding cemetery was built of stone from the old courthouse and jail, razed in 1931, and reputed to have been in the original structure of nearby San Luis de Las Amarillas (Built by the Spanish in 1757). Final resting place for many area pioneers, including soldiers, cowboys, gamblers, preachers, civil war veterans, Indian fighters, and Texas Rangers.

Marker Title: Puerto de Baluartes (Haven of the Strong Points)
Address: US 83, 1 mi. S of Menard
City: Menard
Year Marker Erected: 1964
Marker Location: on US 83, 1 mile south of Menard in roadside park.
Marker Text: In this pass between the hills--location of present day Menard--a site for an important Spanish Mission to the Apaches was chosen in 1754 by Don Pedro de Rabago y Teran, second explorer sent on the assignment by the viceroy of New Spain. Suitable to be fortified and farmed, this pass had its mission built in 1757.

Marker Title: Real Presidio de San Saba
Address: US 190, at Menard Country Club
City: Menard
Year Marker Erected: 1936
Marker Location: 1 1/2 miles west of Menard off US 190 about 1/2 mile (on grounds of Menard Country Club).
Marker Text: Originally established on the San Gabriel River as the Presidio of San Francisco Xavier in 1751 moved to the present site in 1757 as a protection to the Mission Santa Cruz de San Saba known as the Presidio de San Luis de Las Amarillas 1757-1761. After March 1761 the name was real Presidio de San Saba the stone building was completed in 1761.

W.W. Lewis and Others Fight

A short time after the preceding engagement (Dan Roberts Shoots Indian Chief), W.W. Lewis, Jack Hawkins, Ed Sieker, N.O. Reynolds and others, ran on Indians in the rough territory, somewhere south and west of Menard. During the fighting, Ed Sieker killed an Indian about one hundred and fifty yards away.