There are a lot of important historical sites within the D/FW metroplex but it's hard to imagine a heroic event when all you can see is the handiwork of a real estate developer. Head west from Fort Worth and catch Loop 820 to Silvercreek Road exit. Just beyond the first big turn to the north lies an old rock house where there once was a stage station on the Fort Worth to Azle route. Notice the road followed a high prairie, void of timber and easily drained. Next stop was Veal Station where Weatherford travelers boarded and in the late 1850's, connections could be made as near as Bridgeport where the Butterfield Stage crossed the Trinity on the Overland Mail Route to California.

As you follow Silvercreek Road toward Confederate Park Road 1886, you will drop into dense Cross Timbers along the creek. Imagine the difficulty travelers had in crossing through this kind of terrain, though it is worth remembering that the timbers provided protection against mounted Indian attacks. This security encouraged some settlers to raise horses, and the countryside is still thick with small horse farms. 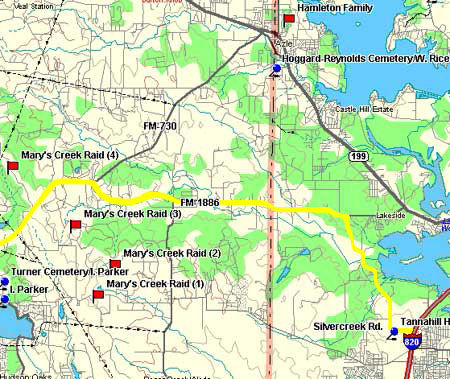 On the fourth of July, 1869, a large band of raiding warriors, in pursuit of settlers' horses along Mary's Creek, once crossed the point where FM-730 turns southwest toward Willow Park. The tan box above contains details about this fight as well as the others marked on the map. The northern horizon over your right shoulder was one of those dangerous places the pioneers carefully watched. Known as Slipdown Mountain, it was a favorite entrance for reservation-based raiders into the Parker County settlements.