During June 1874, James P. Wright and a Mexican, employed by J.C. Loving, were sent out to ride the range. Wright and the Mexican agreed to separate and work in different directions, in order to expedite the handling of cattle. It was Saturday evening, and while riding alone, Wright was charged by Indians about two miles west of the present town of Jermyn, and killed close to Wright's Mountain, in Young County. He ran toward the hills, and was well-armed. Had Jas. K.P. Wright gone into the roughs, no doubt, he would not have been killed. But since he was mounted on a splendid steed, this cowman evidently attempted to run to the ranch. Wright was located the succeeding day. His saddle was found on a hill, northwest of Farmer, about twenty years later.

Further Ref.: Biography of J.C. Loving, in the Cattle Industry of Texas, a large book published in 1895.

The following second version is from the book, Indian Depredations in Texas, by J.W. Wilbarger. 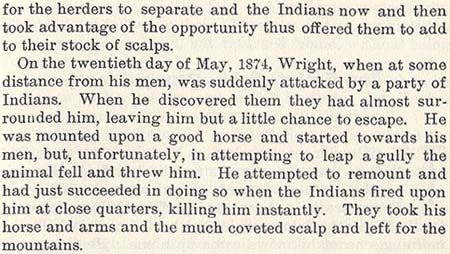