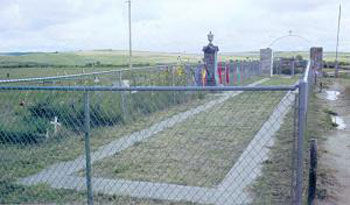 By 1890, no Indians live freely in the West. Furthermore, Congress has cut back Indian appropriations, provoking hunger and the outbreak of disease. Sitting Bull is living quietly on the reservation, when he has a vision of his death at the hands of his own people. In the fall of 1890, Sitting Bull is visited by Kicking Bear, who tells him of the Ghost Dance: a new religion sweeping through dispirited reservations and promising a return of the buffalo and the old ways. Although some Indians are skeptical about the Ghost Dance, they are nevertheless attracted by its message of hope.

The U.S. Army sends 5,000 troops, under General Nelson A. Miles, to the Lakota reservations in late 1890 to put down the Ghost Dancers. When Indian police attempt to arrest Sitting Bull, he is killed. His followers move to the camp of Big Foot, who now moves his people to Pine Ridge, hoping to find a solution to the current discord. General Miles misunderstands Big Foot's movement, and the result is a horrifying massacre.

Newspaper reporter Charles Allen gives a chilling account of the deaths of 250 men, women, and children, slain by the Seventh Calvary at Wounded Knee. On January 15, 1891, the last remaining Ghost Dancers surrender to General Miles. Indian resistance in the West is at an end.

Situated on the Pine Ridge Indian Reservation in South Dakota, Wounded Knee Battleground is open to the public. There are markers, and nearby is the cemetery with the mass grave of the Indians who died that day. 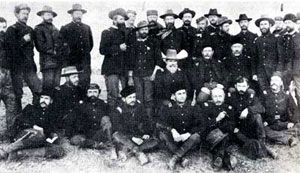 Picture of Officers of the 6th Cavalry who fought at Wounded Knee, including John J. Pershing, standing at right center.

The following story is from the book, The New Encyclopedia of the American West, by Howard R. Lamar.

On December 29, 1890, the 7th Cavalry under Colonel James Forsyth was attempting to disarm the Minneconjou Sioux under Big Foot, who were camped on Wounded Knee Creek on the Pine Ridge reservation in South Dakota. Having heard of the killing of Sitting Bull a week earlier, the Indians were reluctant to comply, and firing broke out. Witnesses, white and Indian alike, violently disagree on which side fired first. In the midst of the confusion, bitter hand-to-hand fighting took place before the Indians broke through the surrounding troops and exposed themselves to the rapid-firing Hotchkiss guns. Scattered firefights occurred in the village and nearby ravines before the conflict ended. The Indians suffered 146 known dead (including 44 women and 18 children) and 51 known wounded. The army had 25 killed and 39 wounded. The campaign brought the concentration of 3,500 troops in the vicinity of Pine Ridge and ended with more than 350 deaths and a total expense of nearly $1.2 million.

The Wounded Knee Massacre ended the long history of the Indian wars. It, as well as the many other conflicts, was the result of a complex chain of events that included the destruction of the Indians' way of life, the failure of Congress to meet its obligations to them, and the appointment of unskilled and corrupt Indian agents. Specifically, the spread of the Ghost Dance religion and the death of Sitting Bull contributed to the Sioux's final psychological and military defeat at Wounded Knee. 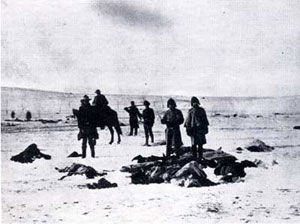 Soldiers detailed to begin the process of removing the Indian bodies from where they fell. (National Archives)

The battle was particularly tragic. It is unlikely that the Indians precipitated the fight because Big Foot's band was surrounded by well-armed soldiers and artillery. Cooler heads and wiser officials probably could have prevented the crisis. Many lives were lost. Historians have charged the soldiers with brutality, citing among other reasons that they were from Custer's 7th Cavalry and thus wanted revenge. Robert Utley has defended the soldiers and has explained the loss of life by the positions of the troops and the bitterness of the hand-to-hand fighting. 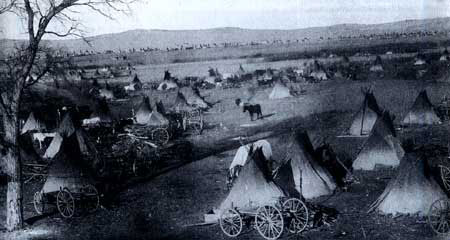 View of the Indian Camp at the Pine Ridge Agency, South Dakota, January 17, 1891