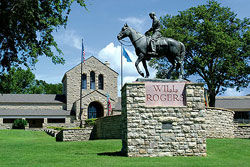 The 16,652-square-foot, eight-gallery museum was built of fossilized limestone quarried nearby. Opened in 1938, the main building was financed by a $200,000 appropriation by the Oklahoma Legislature. The east wing was added in 1982 using additional legislative appropriations. During the 1990-95 period, the entire museum was remodeled with $3 million in private and public funds.

The museum frames the family tomb in the sunken garden. Spread across the southern horizon is the Tiawah Valley. The twenty-acre museum grounds, purchased by Will Rogers in 1911 for $500 an acre, was his planned retirement home site. Following his untimely death, his widow and children donated the land, along with great parts of the collection. 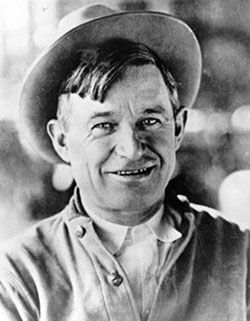 The 2,400-square-foot library serves as offices for the staff of the Will Rogers Memorial. Research space also is available for scholars and writers. Included in the library are more than 2,000 volumes by, about or referencing Will Rogers, in addition to texts on Indians, vaudeville, early motion pictures and the 1879-1935 era.

The carefully protected archives, the world's largest collection of documents related to Will Rogers, include 18,000 photographs and thousands of original manuscripts, private letters, contracts and personal papers.

10:00 a.m. to 5:00 p.m., March through mid-November. Museum is open during the rest of the year but closes Monday/Tuesday and is also closed for Christmas and Thanksgiving.