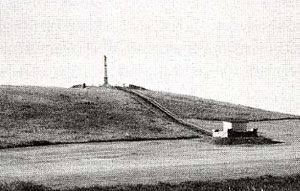 After waiting at Fort Randell for supplies, Sully took rations for 23 days and set out to look for hostile Sioux and possibly meet up with Gen. Henry Sibley and his column, who were still in the field. After finding nothing for many days, Sully met a friendly Indian who told him that Sibley had moved on and the Indians he sought were back on the east side of the Missouri River, traveling toward the James River to gather food. Sully turned southeast.

On 3 September, near the James River, Sully sent a 300-man battalion of 6th Iowa Cavalry under Maj. A.E. House to look for the Sioux encampment. That afternoon House discovered some 500 lodges about ten miles south, in ravines near Whitestone Hill, in present-day Dickey County. Ordered to report back about any contact immediately, House sent couriers back to Sully, but he also moved most of his command-Companies C, E, F, and H-forward to contain the village. Yet with 300 soldiers against perhaps 1,200 Santee, Yanktonai, Blackfoot, and Hunkpapa warriors, it was impossible.

The couriers made it back to Sully, who immediately spurred his men to a gallop. Back at the Indian camp, House tried to negotiate a surrender with the Indian leaders, Inkpaduta among them. Looking at the small number of soldiers before them, the Sioux parleyed unworried. Inkpaduta was about to launch an attack when Sully's column appeared.

The 2nd Nebraska Cavalry, under Col. Robert W. Furnas, moved around to the southeast while soldiers from the 6th Iowa Cavalry moved to the other side and advanced. Dismounting 400 yards from the camp, the 2nd Nebraska sent a volley into the lodges. The Sioux went after them, allowing House and Col. David S. Wilson of the 6th Iowa to slip behind and envelop them from the flank and rear. Furnas moved his men in and the battle became general. The troops repulsed flank attacks, then Wilson led a failed mounted charge into the fray. House also advanced but later had to fall back. In the center of the camp, Sully rounded up the friendly bands of little soldiers and Big Head-about 30 men and 90 women and children in all.

Near dusk, the Sioux pulled back. Sully began to pursue them, but darkness called a halt to the fight. Sully wrote that had he had an hour or two more daylight, "I feel sure that ... I could have annihilated the enemy. As it was I believe I can safely say I gave them one of the most severe punishments that the Indians have ever received."

Indeed, there may have been more Indian casualties at Whitestone Hill than in any other fight in the West. According to best estimates, over 100 Sioux and Sioux allies died in the battle, another 100 were wounded, and approximately 156 were captured. In addition, the troops burned 300 lodges and over 400,000 pounds of dried buffalo meat. Sully lost 20 soldiers and 38 were wounded.