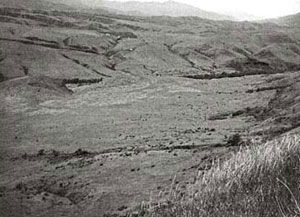 17 June 1877, White Bird, Idaho: After some young Nez Perce warriors killed settlers on the Camas Prairie in northern Idaho, Capt. David Perry was ordered out from Fort Lapwai with all the horsemen at his disposal-about 100 men of Companies F and H of the 1st Cavalry. Perry left on 15 June and marched to Grangeville, where he learned of more atrocities-drunken warriors had killed about 15 more settlers. Picking up 11 volunteers from nearby Mount Idaho, Perry raced south to try to cut off the Nez Perces before they could escape into the mountains.

Chief Joseph, camped at the mouth of White Bird Canyon near its junction with the Salmon River, learned that soldiers were coming and hoped he could talk to them. He only had 135 warriors but posted them among the rocks on the cliff sides. Lt. Edward R. Theller, in advance of Perry's column, saw the Indians approaching with a white flag, but the volunteers opened fire and the battle was on.

Though they outnumbered the Indians, Perry's men were exhausted and no match for the warriors. Many of the soldiers were inexperienced, and they could not stand up to the flanking fire. Theller and 18 men, trapped in a ravine, were wiped out. Some fought their way back the 16 miles to Mount Idaho. Stragglers found their way back later.