Henry Welty, like B.F. Baker, and Wm. M. Peters, numbered among the first settlers of Palo Pinto County. Mr. Welty built his log cabin on the north side of the Brazos, near where the old Palo Pinto and Keechi road cross the river, north of the McKinney place, at the Welty or Adams' Crossing. Mr. Welty lived about four and one-half miles south of the present town of Graford, and approximately eight miles north and east of Palo Pinto. It is extremely difficult for us to picture the conditions that existed on the Upper Brazos at that time. The woods were alive with bear, turkeys, deer, antelope, panther, wild Indians, etc.; and there were few roads, fences, and bridges to be found.

Late in the evening of the 5th of April, 1863, only five weeks after B.F. Baker and William M. Peters were killed, Henry Welty, who had been having chills, told his wife he did not feel like walking, so he would saddle "Old Blaze" to go hunt the milk pen calves. During the early days when there were few fences, the cows were started off to graze in one direction and an hour or two later the calves in another. It therefore, became necessary to bring them in to prevent the cows and calves from getting together. Mrs. Welty and her children were left at home alone when Mr. Welty rode away.

No uneasiness was felt until night began to appear. But when Mr. Welty did not return, the family grew more and more uneasy. Minutes and hours rolled by and still he did not return. During the quiet hours of night Indians howled like wolves and hooted like owls on all sides of the house. Mrs. Welty with her five little children, restlessly awaited their fate or fortune. And still Mr. Welty had not returned. The next day Mrs. Welty took her baby in one arm, held a gun in another, and with several little children following started towards the home of Geo. R. Bevers, one of her nearest neighbors. Mr. Bevers lived at the Flat Rock Crossing of Big Keechi and on the old Fort Worth and Belknap road. Mrs. Welty's other little children, Mary Jane, a girl about 10, Nancy Ann, about 8, James, about 6, and John about 4, followed along beside her. Can you picture a more pathetic model for a statue to be erected in honor of pioneer mothers?

They had not gone very far, however, when this brave mother met Geo. R. Bevers and Dave McClure, who were on their way to Palo Pinto to attend the spring term of District Court. After Mrs. Welty related her story all were reasonably satisfied that Mr. Welty had been massacred by the Indians. In a short time these early citizens met M.L. Lasater, who was on his way from Palo Pinto to Keechi. A search was then made and in a short time Mr. Welty was found where he had been killed, scalped, and stripped by the savages, who took "Old Blaze."

The local signs seemed to indicate that Mr. Welty had found the calves, and was driving them down the trail. This path led by the bend of a small branch, in which several Indians had concealed themselves to give Mr. Welty a mortal blow. After being fired upon by the Indians, he left the trail and rode rapidly away in the southeast direction. Evidently, however, he had already received a mortal wound, for he only went a short distance before falling from his horse.

For fear that somebody may say that the Indians did not do this deed, we shall state that moccasin tracks were found all around, and other evidences offered conclusive proof, that Mr. Welty was killed by approximately ten Indians.

Henry Welty was buried across the river from where he lived, in the little graveyard, near the McKinney place, and near the old Palo Pinto and Keechi road. A daughter was born to Mrs. Welty, several weeks after his death.

Note: Before writing this section, the author personally interviewed Mrs. Mary Jane (Bevers) Taylor, a daughter of Geo. R. Bevers, mentioned above, A.M. Lasater, son of M.L. Lasater, also mentioned above, Mrs. B. C. Tarckington, Mrs. Wm. Metcalf, J.C. Jowell, E.K. Taylor, Pleasant Taylor, Mrs. Huse Bevers, a daughter-in-law of G.R. Bevers, Mrs. M.J. Hart, James Wood, J.M. Welty, (a nephew of H. Welty), who was about 10 years of age when the death of his uncle occurred. Also corresponded with Mrs. Nancy Richardson, a daughter of H. Welty. Also interviewed Jody Corbin, and several others all of whom were living in Palo Pinto and adjoining counties, when this killing occurred.

J.W. Wilbarger provides a brief version of Welty's murder in his book, Indian Depredations in Texas. 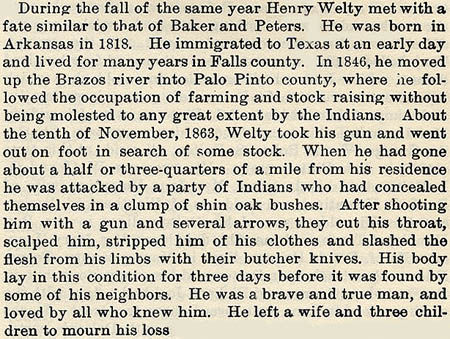