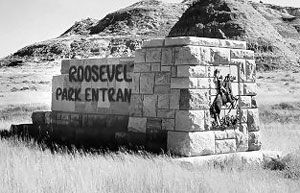 When Theodore Roosevelt stepped off the train in the Dakota Territory for the first time, he was in search of adventure. The date was 08 Sep 1883, and the town that slept at 2:00 am was Little Missouri, a shoddy collection of buildings on the west bank of the river. The 24-year-old Roosevelt was bursting with anticipation about shooting a bison. A feat the took him 10 days to accomplish. Before returning to New York, just two weeks after he arrived, he entered into a partnership to raise cattle on the Maltese Cross Ranch. The next year he returned to the badlands and started a second open-range ranch, the Elkhorn. Theodore Roosevelt returned again over the next few years to live the life of a cowboy, explore, invigorate his body and to have the Little Missouri Badlands renew his spirit. Theodore Roosevelt wrote: "I would not have been President, had it not been for my experience in North Dakota."

Today, the colorful North Dakota badlands provides the scenic backdrop to the park which memorializes the 26th president for his enduring contributions to the conservation of our nation's resources. The area was first established as a Memorial Park in 1947. It gained National Park status in 1978. The Little Missouri River has shaped this 70,448-acre park which is home to a variety of plants and animals.

Within a short time after the death of Theodore Roosevelt on 06 Jan 1919, there were proposals to establish a memorial in his honor for his enduring contributions to the safekeeping and protection of our nation's resources.

In 1934 a cooperative agreement to start a Roosevelt Regional Park Project was signed by the Resettlement Administration, the Civilian Conservation Corps (CCC), National Park Service and the State of North Dakota. The federal government wanted the project to become a state park.

The CCC operations began immediately and were administered by National Park Service. The North and South Roosevelt Regional Parks each had their own camps. By 1935, these sites were designated the Roosevelt Recreation Demonstration Area (RDA). Development by workers from the CCC, as well as Works Projects Administration (WPA) and Emergency Relief Administration (ERA), included construction of roads, trails, picnic areas, campgrounds and buildings. All projects ended in 1941. When North Dakota's state government announced that it did not want the land as a state park, approval was obtained in 1942 to retain the Roosevelt Recreation Demonstration Area for the purpose of study for possible inclusion into the National Park System. North Dakota Representative William Lemke championed the fight to establish a national park but legislation to establish a park was vetoed because some felt the area did not possess those qualities that merit national park ranking. In November 1946, the RDA was officially transferred to the United States Fish and Wildlife Service as Theodore Roosevelt National Wildlife Refuge. Undaunted, Congressman Lemke pressed on and finally after negotiations and compromise, President Truman, on the 25th of April 1947, signed the bill (PL-38) that created Theodore Roosevelt National Memorial Park. This included lands that roughly make up the South Unit and the Elkhorn Ranch site today. The North Unit was added to the memorial park on June 12, 1948. Additional boundary revisions were made in later years.

As a memorial park, it was the only one of its kind in the National Park System. Eventually, in addition to a connection with a president, the land was recognized for its diverse cultural and natural resources. On 10 Nov 1978, the area was given national park status when President Carter signed Public Law 95-625 that changed the memorial park to Theodore Roosevelt National Park. This same law placed 29,920 acres of the park under the National Wilderness Preservation System.

All visitor centers, wayside exhibits, campground amphitheaters, Maltese Cross Cabin are accessible. Both campgrounds have accessible campsites. First portion of Little Mo Nature Trail is paved. Parking areas at each visitor center for buses and trailers. Pull-outs along park road accommodate longer vehicles. Orientation film shown at Painted Canyon and North Unit visitor centers can be captioned. Printed text is available at the South Unit Visitor Center. Access to the Elkhorn Ranch site may require 4-wheel drive and may be inaccessible at certain times of the year due to weather and road conditions.

Theodore Roosevelt National Park is noted for opportunities to see bison, elk, mule and white-tailed deer, pronghorn antelope, prairie dogs, coyote and other small mammals as well as a variety of birds including golden eagles. Wild (feral) horses can be seen in the South Unit and longhorn steers in the North Unit.

"Nothing could be more lonely and nothing more beautiful than the view at nightfall across the prairies to these huge hill masses, when the lengthening shadows had at last merged into one and the faint after-glow of the red sunset filled the west." Theodore Roosevelt.

All roads in Theodore Roosevelt National Park are open to cyclists. The park roads follow the contours of the badlands allowing riders to enjoy the park close up. Off-road cycling is not allowed in the park. All bicycles must remain on paved or dirt roads.

Bicylists should exercise caution as they ride in the park; they will share the narrow roads with large RVs and other vehicles. Traffic is heaviest in June, July and August and Road shoulders are absent in some places. Bicyclists must obey all traffic laws.

Use caution around bison and all wildlife.

The Road Log Guide to Theodore Roosevelt National Park can add to your appreciation of the park. It is available at park visitor centers for a fee (or at the TRNHA Web Page Bookstore).

Special note on the Maah Daah Hey Trail: Bicycles are not permitted on the trail as it passes through both the North and South Units of the park. Bicycles cannot be carried or walked over the trail. They must go around the park. The Buffalo Gap Trail circumvents the South Unit. Users of the trail near the North Unit must use existing roads.

Theodore Roosevelt National Park has campgrounds in the South Unit and North Unit.

The Golden Access Passport is a free pass available to all permanent U.S. residents who are eligible to receive federal benefits based on disability, whether or not you are actually receiving them or not. This pass entitles the bearer, and immediate family or accompanying passengers in a private vehicle, to free admission to all U.S. National Parks, Monuments, Forests, and Historic Sites, as well as half price camping. Apply in person at any National Park Service or U.S. Forest Service area.

No Reservations are needed to enter Theodore Roosevelt National Park. There are several fee free days each year.

None available within the park; a variety of restaurants and grocery stores are available near the park or within a short drive.

There are many hikes in the South Unit and in the North Unit. See the Hiking Page for more information.

Theodore Roosevelt National Park is open to horse use. Visitors may bring their own horses or take rides with the park concessioner. The current trail ride operator in the park is Peaceful Valley Ranch/Shadow Country Outfitters. For more information on concessioner trail rides, contact them directly at: 701-623-4568.

Persons wishing to camp overnight in the backcountry must register and obtain a free backcountry use permit - entrance fees still apply.

Pets must be confined, tied or on a leash at all times. Pets are not permitted in the backcountry, including all park trails.

A full compliment of regularly scheduled programs including talks, evening campfire presentations, nature walks and long hikes are offered June - mid-September. Guided tours of Theodore Roosevelt's Maltese Cross Cabin in summer; self-guided during winter. Ski tours in winter may be offered if snow conditions permit. Educational programs for schools and groups may be scheduled throughout the year.

The badlands of North Dakota receives about 30 inches of snow a year. Snow can arrive in October and stay until April. The wind tends to blow the snow around quite a bit, leaving some areas bare and others drifted high.

The park does not groom any trails for cross-country skiing. Skiers blaze their own trails through the snow. The best places to cross-country ski are on the frozen Little Missouri River and on closed park roads.

Skiing on park trails can be somewhat difficult. The trails are narrow and many cross creek bottoms. These creek bottoms are like little canyons and may be too steep for safe skiing. They, and all coulees and draws, may also fill up with blowing snow hiding their true depth.

Also be aware of wildlife and keep a safe distance from bison (100 yards minimum).

Call the park for information on snow and river conditions.

Summers are warm with temperatures in the 80's and 90's with a few days into the 100's. Evenings can be cool. Average maximum: July is 87.1° and August is 86.7°. Average minimum: July 54.5° and August is 52.4°. Annual precipitation is 15 inches. Winters are generally cold. Recommend layers of clothing, especially in spring and fall. Rain gear in spring. Hat for sun protection is needed in summer.