Indians Attack Taylor Home Near the Head Springs of the Pedernales

Mrs. James Taylor, whose given name was Gill, went to the nearby springs for water, and as she returned to the house, an Indian shot her in the back with an arrow. She ran through the residences and screamed "Indians." When she started out on the other side, they told her to come back. She did and fell dead about fifteen feet from the back door. Eli McDonald grabbed his gun and was ready to make a fight, but his wife and mother-in-law begged him not to do so. The Indians also made overtures of peace, but these frontiersmen were well aware of their intrigues, and at first refused to extend a friendly reception to the savages, who had already killed Mrs. James Taylor. In a short time, Eli McDonald stepped outside, and when he did, he too, was killed by the savages. Mrs. Matthew Taylor was captured by an Indian, but when the savages discovered the only man at the house had been killed, they entered the dwelling and began their pilfer and plunder. The Indian released Mrs. Taylor, who retreated to the nearby timber. Only Mrs. Eli McDonald, and her two children and the three orphan children of Zedrick Taylor, now remained. And while the Indians were taking the bed clothes, ripping open feather beds, for the ticking, and robbing the house of such other things that suited their fancy, Mrs. Eli McDonald, with the children, attempted to slip away, but when she stepped out of the door, Mahaley, her son, saw his father, who lay dead, stripped, and scalped, and was so horrified, he screamed. This attracted the attention of the savages, who came and prevented Mrs. Eli McDonald and the children making an escape. So Mrs. Eli McDonald, her two children, Mahaley and Beckie Jane McDonald, and the orphan children of Zed Taylor, James, Alice and Dorcas Taylor, were made captives, placed on horses, and preparations made to carry them into captivity. But the blood-thirsty savages were not yet satisfied with the treacherous crime they had already committed, so to further appease their passion, they set fire to the frontier cabin. Mrs. Matthew Taylor, who successfully made her escape, was hidden in the thicket of timber, and among the rocks a short distance away, could plainly see her pioneer home being consumed by the savage flames. Night soon came, and Mrs. Matthew Taylor started out in the darkness alone, for her home had already been robbed and destroyed. She became lost, wandered all night, and the next morning, after the break of day, reached the Doss Ranch, about seven miles north. W.J. Nixon was at this ranch, when Mrs. Matthew Taylor arrived.

Mrs. Eli McDonald and the five children were all handled in the most cruel and inhuman manner, and carried into the Indian territory, where they remained for almost a year. But after being several months in captivity, government agents secured their release, and they were returned to Gillespie County to their people.

Matthew Taylor and his son, James, had not heard of the massacre until they returned home, and found the dead bodies of their loved ones, and their happy home burned to the ground.

Note: Author personally interviewed: Mrs. Augustus McDonald, of Harper; W.J. Nixon, who was at the Doss Ranch when Mrs. Matthew Taylor arrived, and others who lived in that section at the time.

Further Ref.: Wilbarger's Indian Depredations in Texas. While the author, accompanied by his wife, Mrs. McConnell, his mother-in-law, Mrs. A.H. Bryan, and his daughters interviewed old timers of that section, it was their pleasure to camp at the head springs of the Pedernales, where this terrible tragedy occurred. Many of the same trees still stand, behind which the Indians hid when they shot Mrs. James Taylor. 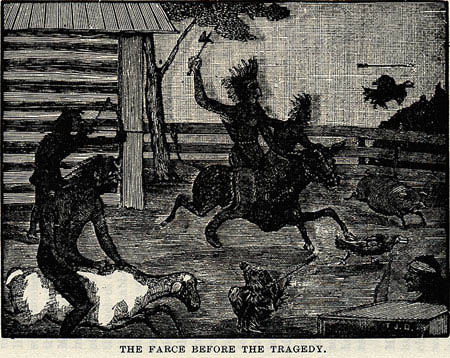 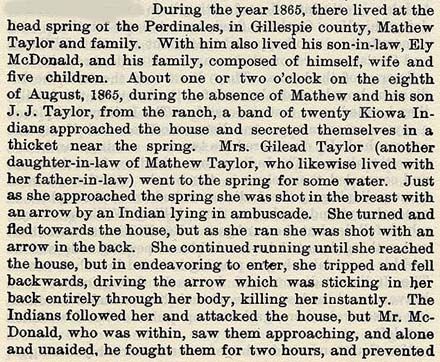 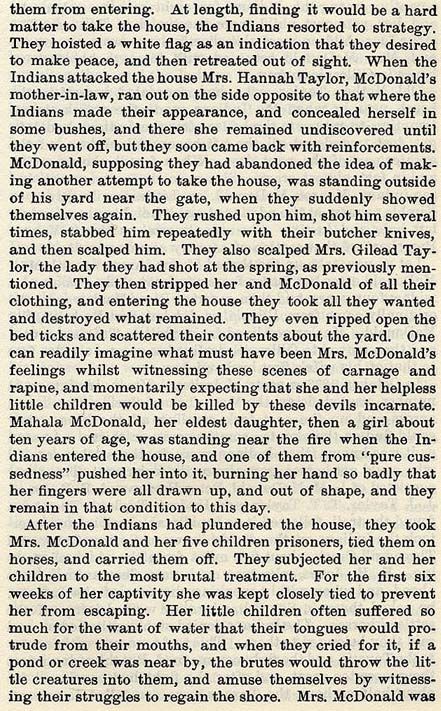 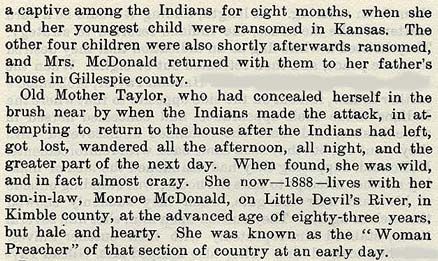 The above passage is from Indian Depredations in Texas by J.W. Wilbarger.