Mann D. Tackett and family moved to Parker County in 1854 and for a few years lived about twelve miles north of Weatherford. During 1858, they moved to Jack County and settled on Boone's Creek, in the southwestern part of the county.

October 26, 1863, during the early afternoon, J.H. Tackett, a son of Mann Tackett, went out in a southwesterly direction in search of stock. Shortly afterwards, his father, who was armed with a double-barrel gun, went north for the same purpose. Mr. Tackett's gun was loaded with a ball on one side, and a buck shot on the other. He was also armed with a pistol. When he had gone only about one mile from his home, he found himself surrounded by fifteen or twenty savages. At first he made an attempt, to run home. But since his best horses had been stolen by the Indians, the savages soon overtook him. Mr. Tackett then dismounted to sell his life as dearly as possible, at a point within one-half mile of his own residence. He fought the warriors away for some time, as was shown by the circular trail some distance from the tree, behind which Mr. Tackett, perhaps, held the Indians at bay until he discharged all of his loads, for seven or eight shots were heard at the residence.

When J.T. Tackett reached home, he was informed of the firing, and had, perhaps, heard some of the shots himself. As a consequence, he and a younger brother, Caleb, went out in search of their father, and it seems that Caleb, previous to this, had made an attempt to offer his father some assistance, but realized that it was of no avail, for the savages were still on the ground. In a short time, J.H. and Caleb Tackett reached their father, who was already dead, stripped of a part of his clothing, but not scalped. His guns were gone, and many arrows were in the tree by which he stood, on the ground, and in his body. The boys hurried to the ranch for a wagon, notified the neighbors and arranged for a coffin to be made at Beale's Station where he was buried.

A posse of citizens followed the Indian trail, and after going for, perhaps, half a mile, they found a dead savage, and indications disclosed others were wounded. The dead Indian was dragged to the Tackett ranch and stood against a tree some distance from the residence.

Many years after the death of Mr. Tackett, the metal part of his old double barrel gun was found a short distance from where the fight occurred. 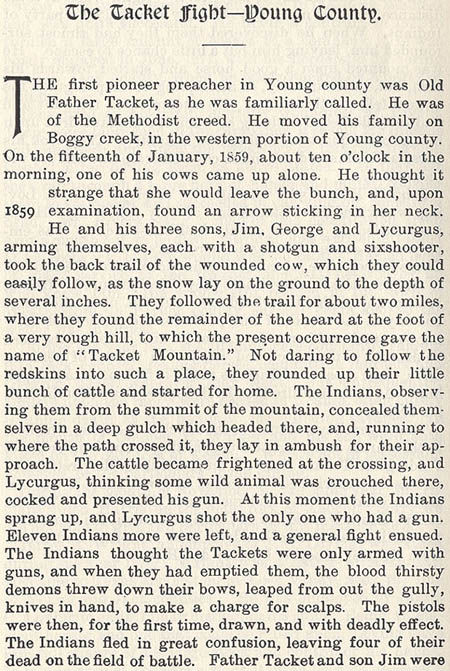 The above version of the story is from the book, Indian Depredations in Texas by J.W. Wilbarger.

We received the following information via e-mail:

In regard to the Mann Davis Tackett artlcle on your site, his correct name was Mann Darius Tackitt.  He was the son of Rev. Pleasant Tackitt.

In the third paragraph his son is listed as J.T. Tackett.  It should be J.H. Tackett.

We received another e-mail correcting the story above.