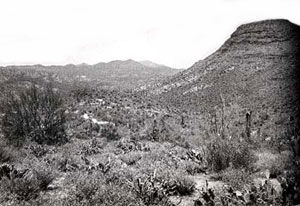 16 June 1868, Fort McDowell, Arizona: Sgt. J. Lemon and four privates of Company E, 1st Cavalry, were assigned to carry mail from Camp Reno, in the Tonto Basin, to Camp McDowell, about 25 miles away. When they reached Sugarloaf Mountain, 12 miles east of their destination, one of the men, Pvt. Theeley, noticed Indians ahead and shouted out a warning. Lemon, in front, tried to spur his horse on, but a volley from nearly 100 Apache warriors crashed into them from three sides. All five men and all the horses were hit. Lemon managed to kill one warrior before being overwhelmed. One of the privates ran to a hill and held on for a time before being hacked in two. Only Theeley got away, making it back to an outpost of Camp Reno with 20 Apaches in pursuit.

The total losses were four soldiers killed and one wounded, and one Apache killed.