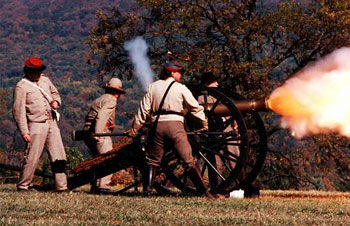 There is no water supply and no restrooms on Maryland Heights. The trails include some strenuous uphill sections. Protection of these irreplaceable ruins is your responsibility. Please leave them undisturbed.

Rock climbing is allowed on the cliff face of Maryland Heights by permit only. Special regulations regarding rock climbing as well as permits may be obtained at the Ranger Station or Information Center in the Lower Town. Registrants must possess and use approved climbing equipment. A check-out is required.

The old stone piers across the Potomac River originally carried a covered timber railroad and wagon bridge erected in 1836 by the B&O Railroad. John Brown entered Harpers Ferry via this bridge when he led his famous raid in 1859. Nearly two years later, on June 14, 1861, Confederate troops blew it up – the first of nine times it was destroyed during the Civil War. An iron "Bollman bridge," completed in 1870, survived for 66 years, until the record Flood of 1936 swept it away A new bridge with girders, still in use today, was completed in 1894.

The Chesapeake & Ohio Canal, which extends 184.5 miles from near Washington, D.C., to Cumberland, Md., was completed in 1850. Indebted by the capital costs of construction, impaired by winter weather, damaged by frequent flooding, and unable to compete with the railroad, the canal finally was closed by the Flood of 1924. Lock 33, one of 74 lift locks along the canal, was completed in 1833.

Built in May 1862 in response to Stonewall Jackson's Valley Campaign, this was the first Union fortification on Maryland Heights. With two 9-inch Dahlgren naval guns and one 50-pounder gun, an observer wrote this battery "commands the town of Harpers Ferry and all its approaches. Its fire rakes the summit and side of Loudoun Heights, and sweeps the crest of Bolivar Heights most effectually." The three-sided earthwork was added in June or July 1863.

Old Civil War military roads like the one you're hiking on criss-cross Maryland Heights. Major Frank Rolfe of the 1st Massachusetts Heavy Artillery left us this description: "...the batteries were situated from 250 to 1,065 feet above the river and the roads leading to them very rocky, steep and crooked and barely wide enough for a wagon. Over these roads the guns, ammunition and supplies of all kind were hauled."

Between 1810-1840s, more than 50 charcoal hearths like this one were built on Maryland Heights. Most were elliptical in shape, measuring some 38 feet by 28 feet and cut into the hillside to form a level surface. At each hearth, a collier stacked 30-50 cords of wood around a triangular chimney filled with wood chips. The pile was covered with leaves, dirt, charcoal dust, and then ignited. During a 10-day burning period, this pile reduced to 1,750 bushels of charcoal.

A "double line of rifle-pits," erected here in June 1863, defended against possible attack from the north. These parallel rock walls extended more than 500 feet down the western slope.

In late June 1863, Union commanders raised the height of this line of trenches by 9-10 feet. The resulting parapet was the largest earthwork constructed on Maryland Heights. Five embrasures were cut through this wall, serving as artillery positions for 30-pounder Parrott Rifles.

Union engineers originally designed this fortification as an infantry blockhouse. Measuring 40 feet by 100 feet, this fort straddles the crest of Maryland Heights at its highest elevation – 1,448 feet. The structure was never completed, and by September 1863, the fort had been transformed into a commissary and storage area.

A 9-inch Dahlgren gun weighing 9,700 pounds and capable of hurling a 100-pound shell over two miles was placed here in June 1863. The gun was mounted on a raised earthen platform and could be rotated 360 degrees on a circular iron runner about 11 feet in diameter. The Dahlgren gun was later replaced with a 100-pounder Parrott.

Completed in the fall of 1862, this battery's 30-pounder Parrott rifles could fire a 29-pound projectile 1.25 miles. Colonel William F. Raynolds, in June 1863, wrote that the battery's six Parrotts "commanded perfectly the summit of Loudoun Heights as well as Bolivar Heights."

This site affords one of the best views of Harpers Ferry. Over the years, floods, Civil War, realignments of the railroad, and the march of time have brought considerable change to the town below.