By virtue of an order from the office of Indian Affairs, dated November 25, 1850, Jesse Stem, of Piffin, Ohio, was appointed special Indian Agent for the Department of Texas. In this capacity he served for several years and many of the early reports made during the early fifties were made by Jesse Stem. Since his duties were largely confined to the Upper Brazos and since he was much pleased with this section of the State, sometime prior to this death he established a ranch on the Clear Fork not far from the Comanche Indian Reservation, and near old Camp Cooper.

Early in 1854 Ed Terrell, father of J.B. Terrell, lived at Fort Worth, and was hauling about six or seven wagons of corn, oats, flour, etc., to Fort Belknap; these wagons were pulled by oxen, and when they reached a point somewhere between the present cities of Weatherford and Jacksboro, they were joined by Jesse Stem, who had retired as an Indian agent and a Mr. Lepperman, one of his personal friends from Ohio. Major Stem and Lepperman stayed with Mr. Terrell’s train of wagons until they reached a point within about eight or ten miles east of old Fort Belknap and near Salt Creek, when the two decided to proceed in advance of the wagons, which were heavily loaded and moving along slowly. At this point on Salt Creek, Mr. Terrell decided to stop for dinner, but since Jesse Stem and Mr. Lepperman were anxious to reach their destination, they could not be induced to remain for dinner, but hurried on toward old Fort Belknap. When they reached a point about four miles east of the post, near the present Stem’s Gap, the two were ambushed and killed by Indians. Stem’s Gap derived its name from the murder of Jesse Stem near this point. There seems to be a slight difference of opinion concerning who first found Jesse Stem and his friend Mr. Lepperman. John Peveler, who was a met contractor at the post, had a cattle pen not a great distance form where Stem was killed on the Fort Worth and Fort Belknap Road. It is certain that when Mr. Terrell and his associates reached the point, they found the bodies of the two men murdered by the Indians. It seems that John Peveler was also an early arrival on the scene, but which of the two reached them first, we are unable to state.

This dastardly deed was traced to the door of the Kickapoos, who were at the time, camped in Oklahoma.

The following story is from the book, Lambshead Before Interwoven, by Frances Mayhugh Holden.

Prospects in Clear Fork country looked bright for the Stem family in the late summer of 1853, when they returned to Ohio to consolidate business interests with Stem's brothers and other associates and to visit family and friends. Stem had sent in his resignation as Indian agent before his departure from the Clear Fork agency.

Finishing his business in Ohio, Stem left his family there and in November, 1853, started back to Texas to expand his holdings on the Clear Fork. Instead of traveling as usual down the Mississippi to New Orleans, thence to Galveston by boat and overland to western Texas, Stem, with a friend, William Leppelman, left the boat at the mouth of the Arkansas River and took another boat up to Shreveport, Louisiana. There they stayed over a few days on business.

They then secured a two-horse wagon with a driver to take a load of supplies to the Texas frontier, 350 miles to the west. For themselves, they purchased a carriage and a team of mules. After their departure from Fort Worth, the wagon broke down fourteen miles east of Fort Belknap. Leaving the driver behind with the wagon, the two men continued on toward Fort Belknap in hope of arriving by early evening on Sunday, February 12, 1854. They never made it.

The next day, a rider arrived at the fort and reported having seen two dead bodies beside the road four miles east of the post. Major H.W. Merrill, garrison commander, sent out a wagon for the bodies. The men had met horrible deaths. Stem's skull and jawbone were broken, and Leppelman's skull was caved in and shattered and an arm also fractured. A rifle, broken and bent, and moccasins and a bow covering identified as Wichita or Waco lay nearby. Only the men's coats and hats had been removed; their watches and money were left on the bodies. The Indians had made off with two mules and a horse. Stem and Leppelman were buried in the Fort Belknap cemetery on February 14.

The deed was traced to the Kickapoos, who were then in Indian Territory. A young kinsman who was with the murderers had told the Kickapoo headmen, who then reported to the army officers when summoned. Why the Kickapoos left evidence pointing to the Wacos and Wichitas is unclear. Perhaps they were trying to express their outrage at the harsh treatment of Wichita chief Koweaka and his people, or perhaps simply laying a false trail.

Major Merrill informed Texas Indian Superintendent Robert S. Neighbors, who was shocked at the cold-blooded clubbing to death of Colonel Stem. Neighbors and Major Merrill, reassured to learn that Brevet Major A.D. Tree was in pursuit of the murderers, offered a reward of five hundred dollars for delivery of the culprits for trial.

However, Indian justice did not wait on the military or a jury. When Major Tree found the Kickapoos in Indian Territory, the tribe had already held council, at which the execution of the Kickapoo criminals had been decreed. One was killed by his nephew, the other by his brother, and all the stolen property was returned. The names of the murderers seem appropriate: Polecat and Thunder.

Rutherford B. Hayes said of the death of his friend: "So good a man, so much beloved, so many to mourn his loss. It is awful, awful; I can't get it out of my thoughts."

The remains of Colonel Jesse Stem were removed from old Fort Belknap Cemetery in 1910, taken to Washington, D.C., and reinterred with honors, according to Joseph Carroll McConnell, who interviewed frontier settlers of the area in the 1920's.

The following is from the book, Lambshead Before Interwoven, by Frances Mayhugh Holden. 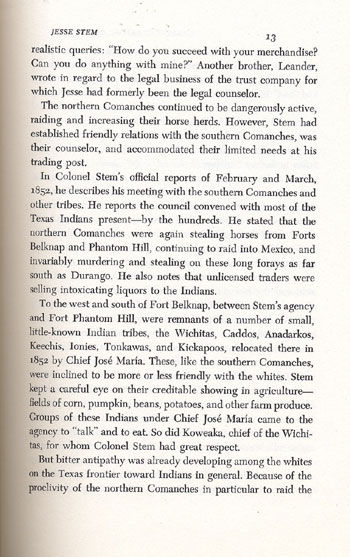 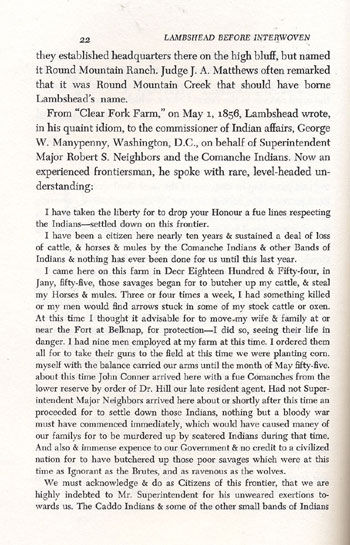 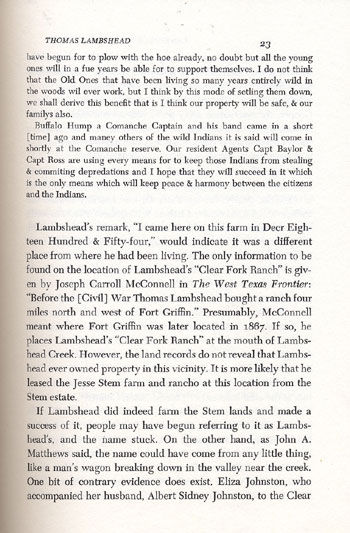 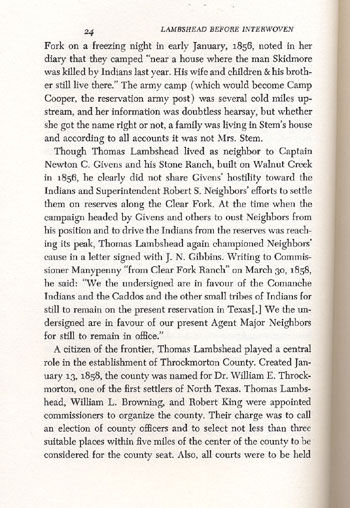