Statehood/The Establishment of Fort Worth

In 1845, Isaac Spence and a partner obtained the rights to open a trading house on the Trinity. A.G. Kimbell and partner had previously established a post somewhere between Fort Worth's hospital district and the Botanical Gardens, which was operated for about a year by Edward Terrell and John P. Lusk until they were temporarily captured by hostile Indians. In September, Spence reported to officials in Austin that Ranger Colonel Smith and two Indian chiefs helped him select the site called Marrow Bone Spring.

…the most suitable place for the Trading House and the one where all the Indians wish it to be placed. I have put up a House 36 feet long by 16 feet wide with a frame roof, covered with two foot boards nailed and enclosed with half logs as pickets fastened together in a substantial manner, I am putting up some other necessary outbuildings for our convenience comfort and security all of which I am having enclosed with strong and substantial pickets. 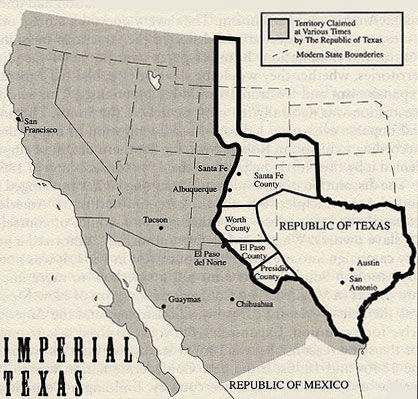 Map of Imperial Texas from the book, Blood & Treasure, by Donald S. Frazier

Texans were divided on the issue of statehood. Pioneers wanted all the border protection they could get but generally were against surrendering control to any government, much less one as distant as Washington on the Potomac. Many Texans believed if there was to be an alliance with a distant power, it should be Britain, who coveted San Francisco and offered expansion of Texas territory to the Pacific.

Acquiring Texas had long been one of Andrew Jackson's dreams. He sent his protégé, Sam Houston, there in 1832 to cool the Indians in the name of the United States. The hero of the Battle of New Orleans could hardly sit still for a British Texas. He spurred another protégé, James Polk, into the presidency on the platform of immediate Texas annexation. Liberal conditions included the U.S. delivery of cash, soldiers and forts while Texas retained all its public land, the right to fly its flag at the same height as the stars and stripes and divide itself into six states. That is, assuming of course, there could ever be an agreement on which state would get the Alamo. 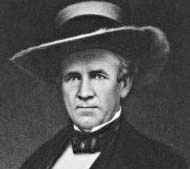 It was the public land issue that caused the United States trouble in its negotiations with the Indians. It promised but couldn't deliver Texas soil to the Comanches, nor could anything do much to curb western expansion. Following the treaty at Bird's Fort when Houston was confronted with Comanche complaints about the absence of a permanent border, he sadly shook his head and said, "If I could build a wall from the Red River to the Rio Grande, so high that no Indian could scale it, the white people would go crazy trying to devise a means to get beyond it."

On December 29, 1845, Texas became a state, sparking a war with Mexico. As the armies moved to the south, the frontier was left unprotected and the governor ordered new Ranger companies to protect the settlements. Companies were sent to Bryant's Station, about eighteen miles south of today's Temple, Torrey's Trading House near today's Waco and stationed at the trading house at Marrow Bone Springs. Captain Andrew Stapp's company from Collin County took charge of the Marrow Bone Station. He subsequently split his force, ordering William Fitzhugh to establish an outpost on the Elm Fork of the Trinity, about ten miles south of the Red River. (An 1852 Peters Colony map indicates the outpost to be about three miles southeast of Gainesville off of Farm Road 372.) Stapp's men were ordered to maintain contact with Fort Washita, located near Durant, Oklahoma about forty-five miles northeast of Fitzhugh Station. Enlistments ran out in February of 1847 and the reorganized company was given to Fitzhugh, along with a promotion. He sent part of his men thirty miles south to Hickory Creek where they built a post on the edge of Denton. (The Peters Colony map shows the Hickory Creek Station about one mile northeast of Pilot Knob or about two hundred yards southwest of where I-35W crosses Hickory Creek.) 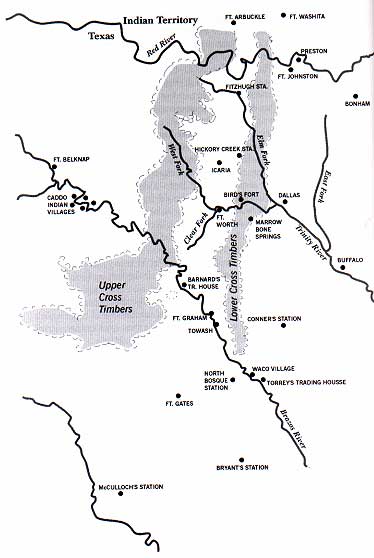 In the summer of 1847, Lieutenant Colonel Peter H. Bell was overall commander of the Ranger companies on the frontier including Middleton Tate Johnson's. They were stationed near Torrey's on the Brazos and Captain Shapley Ross' was ordered to establish a post on the North Bosque, fifteen miles above Torrey's. In January of 1848, Johnson was ordered to move his company to Marrow Bone Springs which they renamed Kaufman Station but was widely known as Johnson Station.

Indian agent Neighbors argued against these moves because along with a lax policy, they encouraged white settlement far to the west. (Dillingham Prairie in southern Jack County was first cultivated in 1847.) In May of 1848, Captain John Conner led his company to Smith Station on Richland Creek, about four miles west of today's Milford. Early in 1849, most of the companies were mustered out and the army was to station dragoons in their place. Colonel Johnson claimed Marrow Bone Springs, as the last of the Peter Colony contract had expired. He expressed his dissatisfaction with the fact that the army was only manning Torrey's and Conner's Station, which left him and countless other settlers on the northwestern frontier unprotected. The army responded by establishing Fort Worth. 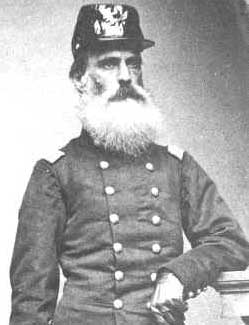 Major Arnold and his dragoons built the original post at Cold Springs and then reestablished it on the bluff of the Trinity where Tarrant County Courthouse now stands. Major Starr arrived on Christmas Day, 1849 with badly needed reinforcements. They had come up the Trinity as far as the port at Buffalo on the steamboat, Jack Hays. Together the soldiers completed the newly designated "Fort" Worth the next year. During the next few years, Arnold and Starr organized and conducted vigorous patrols and occasionally punitive strikes between the fort and the Red River. Starr went on to earn a heroic record and the loss of an arm during the Civil War, after which he returned to the North Texas frontier and established the post at Jacksboro in 1866.

It's always gratifying to find dedicated people involved with our pioneer history. Lea Ann and I were on a field trip to the reenactment at Fort Richardson the Fall of 2001 where we spotted Willard Thomas being assisted in adorning a sash which topped off his Dragoon General's uniform. Unfortunately, we are having trouble getting the pictures on the web at this time but just the same, meeting Willard was a fortunate occurrence. He gave us a tour of the Heritage Room in the courthouse as well as Heritage Park, just to the northwest, which overlooks the Trinity where the traildrivers used to bed down their herds. We then visited the Pioneer Rest Cemetery and admired the new memorials installed honoring the unknown soldiers who are now known thanks to Willard's dedicated efforts. I also include Willard's short history of the fort in Fort Worth.

Click here for Julia Kathryn Garrett's description of Fort Worth history from her book, Fort Worth, A Frontier Triumph. She was a legendary history teacher at Arlington Heights High School and an invaluable figure in the preservation of Texas History.