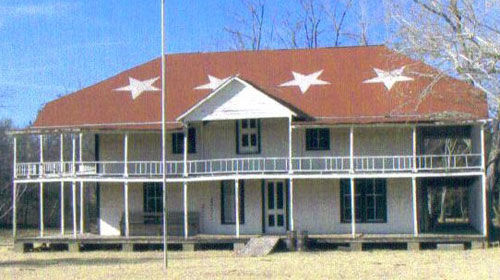 The Star House was built around 1890 for renowned Comanche warrior, leader, and statesmen Quanah Parker, with the help of Texas cattlemen, a testament to the respect Quanah commanded. Quanah skillfully balanced his roles as a leader within the Comanche Nation and as an emissary to white culture, adopting some practices while maintaining his own culture. The Star House is an excellent example of this balance, displaying Quanah’s success and wealth while also allowing him to continue practices such as sleeping outside on a 2nd story wrap-around porch, added shortly after construction. The large stars on the roof were also added shortly after construction, with many stories about their origins. One old story relates that, after meeting a Brigadier General with many stars on his uniform, Quanah had 14 stars painted on the roof of his house, a smoke house and a summer house to represent his own military prowess. Others have related the stars to Quanah’s preference for sleeping outdoors, serving as a representation of the night sky over him even as he slept within the structure.

When Quanah died in 1911, fearing the property would be sold off, and belongings divided among multiple wives, Quanah’s daughter Mrs. Birdsong bought the house with the help of a banker in Cache, OK. In 1956 the Star House faced a dire fate, when Ft. Sill almost destroyed it. Mrs. Birdsong, who still lived in the house, worked with Herbert Woesner, Jr. to relocate the house to Eagle Park. Mr. Woesner worked diligently to restore the house. Eagle Park became a relocation spot for over a dozen threatened buildings, with the intent of being a museum and tourist attraction, but closed over 25 years ago. While much of the park is today a ghost town, the Star House is still host to Comanche events and Parker family activities (including the memorial for Mr. Woesner, recently deceased). A non-profit organization, the Quanah Parker Society, sponsors these events. However, recent assessments have revealed serious deterioration at the site, and action is needed to save this rare piece of Oklahoma history