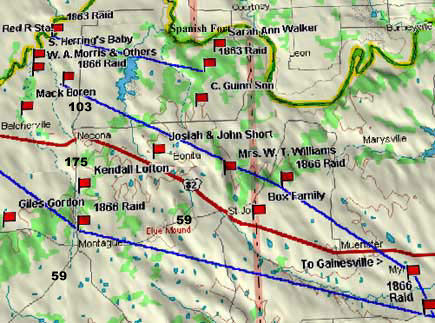 In the late 1750s, the Spanish sent an army of five hundred to punish the Comanche, Wichita and their French allies at what is now called the Old Spanish Fort. They intended to teach the Indians not to raid the settlements around San Antonio but their overwhelming defeat encouraged future attacks. The Spanish settlers became virtual prisoners inside the walls of their missions and presidios.

Amazingly the Spanish leaders in Texas were not aware of the existence of the powerful Comanche nation. Their missionaries and soldiers would first meet the Comanche in 1757 at the mission near the Presidio of San Saba, near present day Menard. The prospect of a successful silver mine and Lipan Apaches' request to become Christians persuaded the Spanish to build the outpost. The Apaches' true intentions were to draw Spain into a war with their Comanche enemy. In fact, they bragged about the strength of their new Spanish protectors; mentioning their horses, gunpowder and gold. Their gossip soon brought the expected results. In March of 1758 over two thousand Wichitas and Taovayas led by Comanches descended on the mission. They rode through the gates and proceeded to massacre the inhabitants.

The Father President went out into the courtyard. I accompanied him, filled with amazement and fear when I saw nothing but Indians on every hand, armed with guns and arrayed in the most horrible attire. Besides the paint on their faces, red and black, they adorned with the pelts and tails of wild beasts, wrapped around them or hanging down from their heads, as well as deer horns. Some were disguised as various kinds of animals, and some wore feather headdresses. All were armed with muskets, swords, and lances (or pikes, as they are generally called), and I noticed also that they had brought with them some youths armed with bows and arrows, doubtless to train and encourage them in their cruel and bloody way of life....

The Friar noted that among the hundreds of Indians of various tribes, one seemed, simply by his demeanor, to be in command.

…He was a Comanche, according to the barbarians themselves, and worthy of respect. His war dress and his red jacket were well-decorated, after the manner of French uniforms, and he was fully armed. His face was hideous and extremely grave.

Within minutes, most of the clergy lay dead in the courtyard. The Indians proceeded to defile the church and hunt down and murder all but the few who managed to escape.

The Spanish, outraged by the atrocities, authorized Colonel Parilla to lead five hundred men to North Texas and punish the Comanche and their Wichita allies. Parilla skirted the lower Cross Timbers on the west side and came around and up to the Red River then back to the east and that’s where he found the marauders, at Old Spanish Fort, as we now call it. At that time it was one of several French trading posts that stretched across the Red River and into North Texas near the interior rivers. Parilla’s men faced close to six thousand superiorly armed, superiorly mounted Indians flanking sophisticated defensive breastworks. A detachment of less than one hundred Taovoya cavalry, dressed in buckskin including helmets which sported colored horsehair plumes, swept down the road to the south that had been cut through the timbers and confronted Parilla’s forces. His contingent of one hundred and thirty soldiers halted their advance. His army then advanced across the river and climbed upon a plain where they caught a clear view of their Taovoya harassers disappearing behind the zig zag gate of the impressive French-Indian fortification.

He ordered up his cannon in view of over a thousand mounted painted warriors, heavily armed with a variety of French pistols and muskets. Standing next to them, holding their horses' bridles were reloaders, who would serve as light infantry once the cavalry charged. Parilla’s cannon fire proved pitifully ineffective; drawing the jeers and laughter of the French and Indians. Parilla’s Indian contingent, which made up the bulk of his force, broke and ran, many taking the Spanish army’s horses. They headed due south right down the broad Grand Prairie which stretches between the upper and lower Cross Timbers. In their dust followed the panicked Spanish force who had abandoned their cannon and many of their other weapons during their flight.

The Spanish were disgraced. Blaming French weapons and soldiers did not ease their shame nor change their situation. In fact, the Comanche recently won the subordination of the French and Wichita in a series of decisive battles on the plains north of Texas. They needed additional arms and manpower in order to drive the Apache, their heredital enemies, out of Texas. The Wichita welcomed the alliance as they needed the Comanches' help in their long and bloody struggle with the Osage. Over the next century, the Spaniards, perceived to be friends of the Apache, would endure countless bloody raids under the “Comanche Moon.”

The tragedy of San Saba marked the end of Spanish military efforts to further colonize Texas. Toward the end of the century, a governor of Santa Fe named Don Juan Bautista de Anza attacked a Comanche camp while the warriors were on a hunt. His men destroyed their lodges and killed or captured the inhabitants then successfully ambushed the returning warriors. Stunned, the Comanche admired the Spaniards’ audacity and negotiated a truce with de Anza which established peaceful trading relations. The Comanche soon developed steady trading partners with the New Mexicans, later referred to despairingly in Texas as Comancheros.

So in 1786, one by one, Comanche tribal leaders came up to embrace de Anza and to rub their painted faces against his, chiefs such as He Who Saw Fire, Bear Bird, The Crafty One, He Gnaws his Master, Seated on the Mountain Range, Ugly Game, Hoarse Bark, The Feeble Effeminate One, and The Decayed Shoe, of whom we shall hear more later. Some months afterward the new commandant general, Jacobo Ugarte y Loyola described a similar group who visited him in Chihuahua: "All of these Indians are robust, good looking, and extremely happy. Their faces show forth the martial, frank, and generous character that distinguishes this nation from the others of this frontier. Their dress is decent, fashioned from buffalo skins they provide themselves. They paint their faces with red ochre and other earths, highlighting their eyelids with vermilion. They love adornments and sport them especially in their hair which they wear braided and intertwined with imitation gold buttons, colored glass beads, ribbons and whatever other thing that glitters."

The following description of Parilla's battle at the Old Spanish Fort is from the book, The West Texas Frontier, by Joseph Carroll McConnell.

On October 7, Parilla and his mixed army of Spaniards and Indians reached the old French fort on Red River. Here they were much surprised to find a large body of Indians, and, perhaps, Frenchmen, secretly fortified behind a strong stockade and flying the flag of France. They were also skillfully using French weapons and tactics of war. For four hours the Spaniards were attacked by Indians from both within and on the outside of such fortifications. The Spanish directed two swivel guns at the stronghold, but apparently with little success. The Indian cavalrymen were each attended by two infantrymen, who were carrying and loading extra guns. During the most stormy part of the battle, and up until his death, a very important Indian chieftain rode a fine horse in front of his warriors in the foremost of fighting and from one end of his forces to the other. This chief was garbed with a helmet of white buckskin, which was plumed with red horse hair. The chief showed much dexterity in the management of his men and the use of his horse and arms. But he was finally shot down by the Spanish, who considered him a special target It was reported that no less than six thousand warriors resisted Parilla and his men, but the author is of the opinion these figures were greatly exaggerated. According to reports, along late in the evening Parilla's army began to desert, and being greatly overpowered in the conflict, the Spanish retreated and left their two cannons and extra baggage behind. Parilla sustained a loss of fifty-two men, and the opposing side believed to have lost an equal number. Parilla and his men were pursued practically all the way to Mission San Saba, which they reached October 25, 1759.