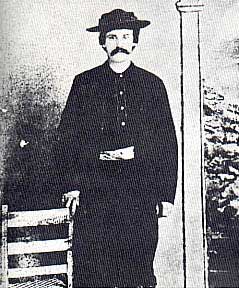 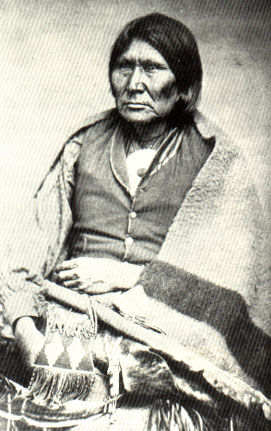 "He made several dashes towards us, and was the best rider I ever saw. He was a slim, trim-made Indian, about twenty-two years old. He was mounted on a beautiful blood-bay horse, with black mane and tail, and star in the face. This chief rode no saddle, but had a red blanket strapped around his horse. He could dismount and mount again, with his horse in a gallop; displaying an agility that was surprising. He could drop down on the opposite side of his horse, as quick as a flash, and expose nothing but his hand and foot, his horse going at full speed. He wore red leggins, and fine beaded moccasins. He also wore a beautiful beaded ornament on his breast, which entirely covered it. He had his scalp-lock platted, and a prairie chicken's head tied to the end of it, which hung down to the middle of his back. The chicken's head was painted a deep red..."

More on the Keep Ranch Fight