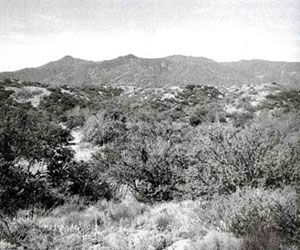 5 June 1870, Globe, Arizona: Lt. Howard B. Cushing received orders to track down the Pinal Apaches responsible for the Israel-Kennedy wagon train massacre. Cushing left Camp Grant with a detachment of Company F, 3rd Cavalry; 14 men of Company B, 3rd Cavalry, under Lt. A. Sidney Smith; and a 30-man detachment of Company K, 1st Cavalry. Cushing's scouts Joe Felmer and skilled tracker Manuel Duran followed a complex trail the Apaches had made into the Pinal Range. The trail led north to the San Carlos River, doubled back to the San Pedro, and turned north again into the mountains. At last Duran spotted smoke in a valley northeast of Signal Peak, southwest of present-day Globe Arizona.

The soldiers found the camp and, in the darkness, surrounded it. An Apache discovered them and called out an alarm. Cushing ordered his men to shoot, and pandemonium erupted. The soldiers were everywhere; escape for the camp was impossible. With no casualties of their own, the soldiers killed about 30 Apaches and captured several women and children.