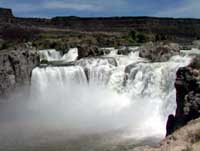 The Shoshone Indians used to catch salmon at the foot of Shoshone Falls. The 212-foot cataract was much too high and steep for the ocean-going fish, so this was the eastern terminus in the Snake River for migrating salmon. Located just outside the town of Twin Falls, Shoshone Falls is the largest and most dramatic of all the waterfalls on the Snake. At least, it is in some years...

Shoshone Falls is such a spectacular work of nature that the entrepreneurs who settled the Twin Falls region of Idaho disputed which of two industries to promote: irrigated agriculture or tourism. To divert upstream water for irrigation would diminish the falls. To preserve the falls for tourists would foreclose agricultural expansion.

A lawsuit and court judgement settled the matter in favor of the irrigators in 1902. Thoughts of making Shoshone Falls a national park died away, and the phrase "Niagara of the West," which had drawn Oregon Trail travelers to detour slightly for a look at the falls, is no longer much heard.

Nevertheless, the cataract displays its magnificence during certain high-water years when the "mad" Snake River runs as high and wild as ever. Shoshone Indians called the falls "hurling waters leaping." The river plunges 212 feet over vertical rock ledges in a thundering roar--a longer fall, indeed, than that of Niagara.

The horseshoe rim is a thousand feet wide. The spray practically creates its own weather. Shoshone Falls produces hydroelectric power for Idaho Power Company. Ira B. Perrine, an extraordinary pioneer of Idaho, imagined the possibility of diverting part of the river through a vertical tunnel carved in the solid rock. He began excavating in 1901, making progress intermittently depending on his supply of funds. By 1906 he was building a power house.

The nearest railroad was thirty miles north. Machinery and supplies came via horse- drawn wagons from the station across the desert, down a canyon road to a lava rock ledge, and finally to the construction site. In August 1907, the town of Twin Falls celebrated its sudden abundance of power from the finished 500-kilowatt plant by keeping their electric lights on long past midnight.

Soon the Twin Falls city council created a park on the south bank of the river at the best place for viewing the grand scene. The town celebrated Flag Day there, the Grand Army of the Republic had reunions there. In 1928, the town and Idaho Power erected a bank of flood lamps using 25 million candlepower to light the falls at night. In World War II, the lights were turned off "for the duration" to simplify blackout planning.

Today, people all over southern Idaho pay attention in the spring. If Snake River is "leaping," it's worth a two-hundred mile drive and a picnic lunch to see Shoshone Falls and be amazed.

Fees: $5 per car from March 1 to September 30. School buses are $5, tour buses are $20. Annual permits (season passes) are available at Twin Falls City Hall or the City Parks & Recreation Office.