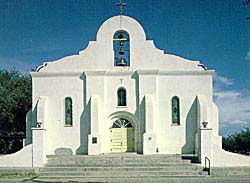 The present Presidio Chapel of San Elizario was constructed in 1877 to replace an earlier chapel that had been destroyed by a flood. The original chapel was built for Mexican troops stationed in the valley in the 1770s. U.S. troops were assigned to the Presidio in 1850 and during the Civil War, volunteers from California were stationed there to prevent a reoccupation of the area by Confederate forces. The one-story adobe chapel is built in the traditional Spanish Mission style.

The Presidio Chapel of San Elizario is located on the south side of the Plaza in San Elizario, south of El Paso on Hwy. 20.