May 3, 1863, after spending the night at the home of Mr. Secrest, who had been away, Samuel Rogers was returning to the home of his son, Henry Rogers, who lived about three and a half miles west of the present town of Carlton. Mr. Rogers was riding a sorrel pony and when he had gone a short distance several savages charged him. He hurried on toward the home of his son, but unfortunately, met another division of the same band of Indians. He then turned his course but was surrounded, killed and scalped.

A crowd of men were soon on the Indian's trail, which led to Resley's Creek, then to the Leon, and subsequently, up the north side of Rush and Copperas Creeks. The whites overtook the savages late in the afternoon, and a running fight followed for several miles, with the Indians in the lead. From time to time, the Indians threw away blankets and other luggage to lighten their load. Nevertheless, several of their number were wounded and the whites also recovered most of the stolen horses.

Author personally interviewed Geo. White, Wm. Reed, and others who lived in that section. 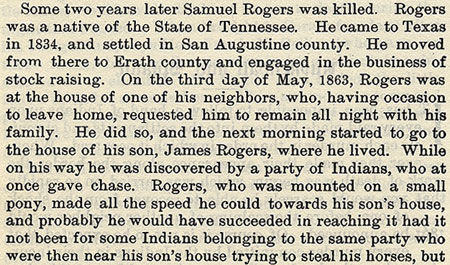